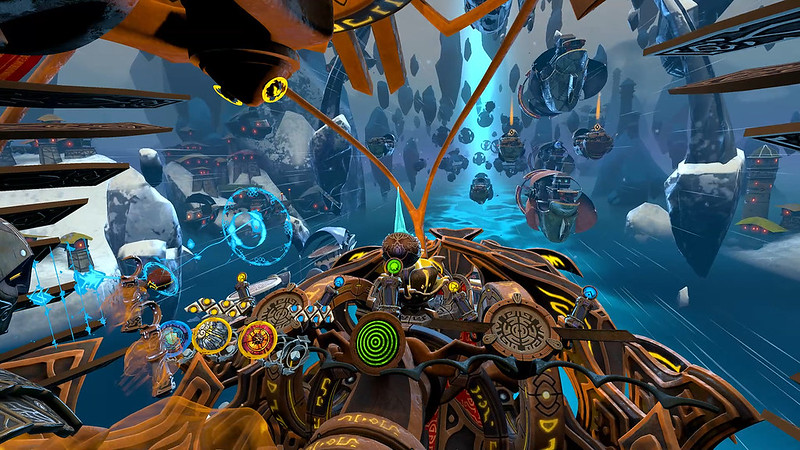 Developer Agharta Studio has announced a new, ‘unconventional’ PSVR outing titled Stardust Odyssey in a post on the PlayStation Blog this evening. In a nutshell, the game sees you transporting valuable cargo across a vast open-world filled with danger.

The project has been inspired by Moebius and Jean-Claude Mezieres’ 80s-style French sci-fi works, which focuses more on fantasy/magic than advanced technology.

As such, the studio has eschewed the traditional futuristic trappings that you’d normally associate with sci-fi, instead replacing them with a ‘warmer’ template that uses primitive materials such as wood, stone, leather, and gold, with a focus on steering ships through space as if at sea.

Stardust Odyssey is described as having two types of environments to travel through: deserts and seas. As mentioned, it’s not about flying through space as it is sailing above a sea of clouds, the blog post reads.

Even though “nomadic life” was the central inspiration for the design, the environment needed to include some “sedentary lifestyle” aspects, such as buildings and architecture, away from the convoys.

These are like unreachable areas in the background, setting the scene for anchoring points where the constantly-traveling merchants could dock. So, we designed homes such as seaside villages with ports and lighthouses that could fit in any type of landscape, along dunes or cliffs, in order to give extra life to the settings and add to the lure of the game.

In terms of wildlife, players can expect to run into dangerous and harmless types of creatures, from parasites that actively attack you to domesticated animals that help tribes out by carrying vital supplies.

Like oxen, the domesticated animals needed to be large, strong creatures, the size of a small ship, in order to tow large cargoes. Moreover, to fit with the underlying theme of the artistic concept, they had to be based on marine life forms, so we decided to create a whale-like creature to carry heavy cargoes.

Stardust Odyssey is currently without a release date.