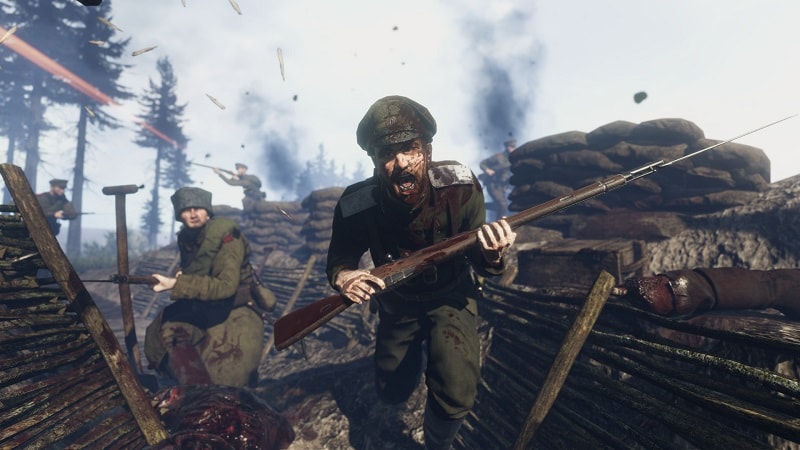 Tannenberg is coming to PS4 on July 24. The sequel to the criminally underappreciated Verdun and the next entry in the WW1 Game Series franchise from M2H and Dutch developer Blackmill Games, Tannenberg is a World War I set squad FPS that not only brings improved visuals, tactical 40 player battles and an all-new map for console owners, but also full PlayStation 4 Pro support, too.

With a focus on the Eastern Front of World War I which details the Austro-Hungarian conflict and other battles, Tannenberg looks set to shine a light on one of the most brutal (and often sadly forgotten) battles of the twentieth century.

You can catch the press release a console trailer for Tannenberg below.

Tannenberg Storms Onto Consoles This July 24

ALKMAAR, THE NETHERLANDS, July 1 2020 – Squad-based shooter Tannenberg, the sequel to Verdun, releases on July 24 for Xbox One and PlayStation 4 with a new map!

Tannenberg puts players in the boots of an infantry soldier on the Eastern Front of WW1 as the Russian Empire clashes with the might of Germany. Authentic weapons, uniforms, and battlefields combine to give the experience of maneuver warfare on the Eastern Front, in stark contrast to the gritty and close quarters nature of combat on the Western Front as depicted in its predecessor Verdun. Tannenberg for consoles features a new map centered on fighting around the fortified town of Przemyśl. PC fans needn’t worry, the new map will also arrive on Steam on July 24!

Authentic Eastern Front Combat Tannenberg offers first-person action on the Eastern Front of the First World War, where players will participate in large-scale maneuver warfare on the borders of Russia. The Germans with their Central Power allies faced off against the Entente led by Russia in the East. Despite the enormous significance of this front and the millions of people involved in fighting, it is sometimes overshadowed by the Western Front (which we portrayed in our first game Verdun). Tannenberg gives players a chance to immerse themselves in a vital part of WW1 that they might not be so familiar with.

Players participate in 40 player battles of maneuver, where the goal is to capture key sectors and drain the enemy’s victory points. Choose your squad, pick a loadout, and fight to control the battlefield. Utilize artillery, gas, heavy machine guns, and more to gain victory! Every nation in Tannenberg is outfitted with authentic weapons, gear and uniforms true to the times. Effort has been taken to include the often forgotten participants in the Eastern Front fighting, from Roumania and Latvia to Austria-Hungary and Bulgaria.

New Przemyśl map features fierce fortress fighting The community has been vocal with their enthusiasm for a console release, and as a thank you for their patience we’ve made sure to add a new map for the upcoming release: the Austro-Hungarian fortress of Przemyśl.

The fortified town of Przemyśl was the site of the longest siege in the First World War, where the Austro- Hungarian defenders eventually surrendered to the Russians. Large fortifications make this a very different battlefield compared to the generally more open areas seen in many Tannenberg maps. The battle for the East is waged across a wide range of terrains; from large forests and burnt out villages to Roumanian mountain peaks, Latvian swamps and Austro-Hungarian fortresses.

Controls, graphics and performance have all been optimized for consoles to ensure a seamless multiplayer experience. Maneuver mode features 40 player battles with up to 20 bots. Extra effort was taken to make sure Tannenberg takes advantage of the possibilities offered by the PlayStation 4 Pro, and that it meets the standards for Xbox One X Enhanced on Xbox One.

Developer and M2H co-founder Mike Hergaarden says: “Following community feedback after the initial Verdun console release, we decided to handle all console versions of our titles in house – this started with the recent remaster of Verdun. This gave us valuable experience with optimizing the UI, graphics and controls for Xbox One and PlayStation 4, and we got a lot of positive feedback from players. For the console version of Tannenberg we built it ourselves from the start.”