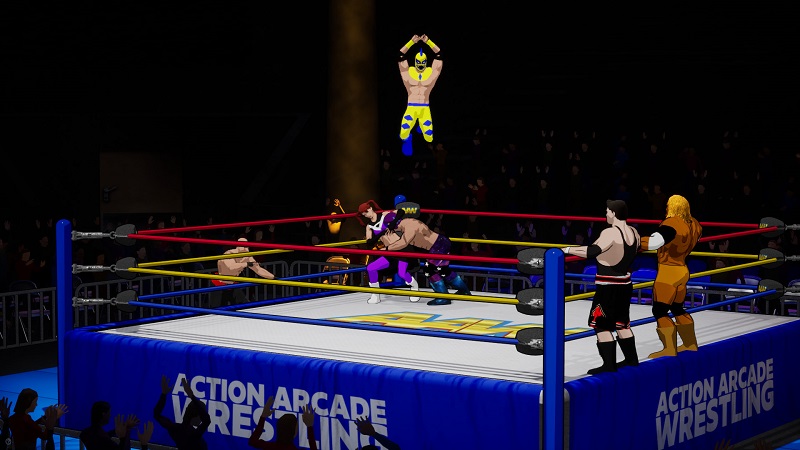 In the absence of a new wrestling game from the WWE 2K folks (2K Battlegrounds notwithstanding), other developers are stepping up to deliver their own take on the bruisers of the squared circle. The latest of these is Action Arcade Wrestling for PS4. from developer VICO Game Studio.

An independently developed wrestling game that boasts a roster of fictional wrestlers in lieu of the sorts of household names from the WWE and AEW rosters, Action Arcade Wrestling is a cel-shaded, 3D wrasslin’ effort that lets players powerslam, hip toss and… lightning bolt their foes in the face with reckless abandon.

Already out on PC, you can catch the Steam listing for Action Arcade Wrestling below.

Perform a BODY SLAM, knock’em down with a CLOTHESLINE, pull off the classic PILEDRIVER AND… shoot LIGHTNING BOLTS into your opponent’s face?! Whatever you do… don’t find yourself looking up at the lights!

Action Arcade Wrestling brings everything you love from 90’s wrestling games with its own twist of chaos and fun. Join the action and step through the ropes in this fast-paced, arcade wrestling extravaganza to superkick the overly simulated wrestling games out of the ring! Choose from a roster of 30+ outrageous wrestlers executing their powerful attacks and superhero-like abilities in the most over-the-top wrestling game ever conceived.

If that isn’t enough crazy for you, jump into the AAW Wrestle Lab to create your ultimate wrestler. The Wrestle Lab provides an unprecedented amount of creation tools where gamers can unleash their creativity. Whether it’s your favorite superhero or most feared monster, the Wrestle Lab is only limited by your imagination.

Action Arcade Wrestling is set to release for PlayStation 4 sometime in 2021.