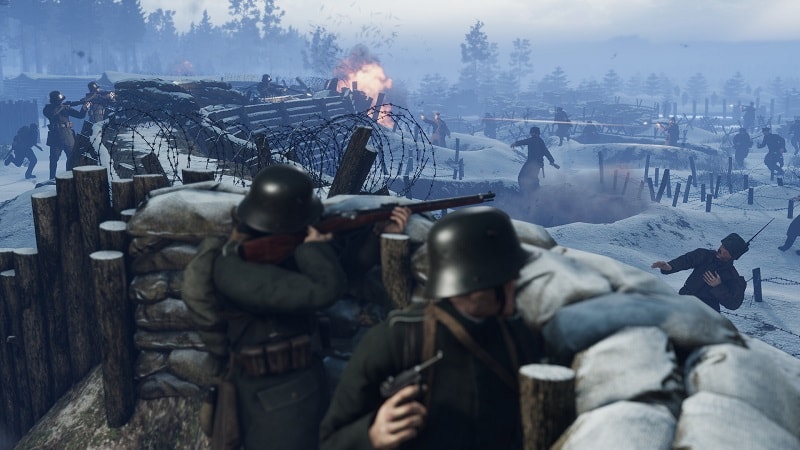 WW1 FPS Tannenberg has now released on PS4 courtesy of M2H and Blackmill Games. The second title in the publisher’s WW1 Game Series which seeks to explore the numerous theaters of war in the First World War, Tannenberg allows players to take the fight to the Eastern Front with massively tactical 40-player battles, a dynamic weather system, authentic weapons, uniforms and so much more.

The previous title in the series, Verdun, covered the conflicts of the Western Front and you can catch our review of that here.

Elsewhere, look out for our review of Tannenberg very shortly. In the meantime, you can catch the press release for the Tannenberg console release below:

Tannenberg out now on Xbox One and PlayStation 4! WW1 FPS Tannenberg gets console release

ALKMAAR, THE NETHERLANDS, July 24 2020 – Squad-based shooter Tannenberg is released for Xbox One and PlayStation 4… with something extra as well!
Tannenberg brings authentic First World War combat on the Eastern Front to Xbox One (X) and PlayStation 4 (Pro). Accurately recreated weaponry, uniforms, and sound effects combine with maps inspired by real battlefields to immerse players in intense combat on the borders of the Russia Empire.

Where Verdun focused on close-quarters trench warfare on the Western Front, Tannenberg gives players greater freedom of movement to represent the maneuver warfare seen on the Eastern Front. As an extra bonus, an all-new map is released today for Tannenberg on consoles and PC: the fortified town of Przemyśl tasks players with capturing points around a fortress that was the site of the longest siege of WW1.

Authentic Eastern Front combat Players in Tannenberg are plunged into multiplayer first-person battles of up to 40 people on the Eastern Front of the First World War. Players can fight for the Tsar of Imperial Russia, Kaiser Wilhelm II of the German Empire, or for several smaller countries involved in the ‘war to end all wars’. The goal is to capture key sectors and drain the enemy’s victory points – but be careful not to get cut off from your HQ!

Weapons range from rifles, pistols and grenades to heavy artillery strikes, choking gas barrages, and bayonets or sabers for close combat. There are 7 squads with multiple roles and squad loadouts, from Russian Cossacks to German Infantry. Also featured are lesser known participants in the war such as Romania, Bulgaria, Austria-Hungary and Latvia.

Assault Przemyśl fortress in new map for console and PC To thank the community for their support and enthusiasm for a console release, we’ve added a new map as part of today’s release: the Austro-Hungarian fortress of Przemyśl.

For 113 days the Austro-Hungarian defenders at the fortified town of Przemyśl held out against Russian troops, before finally being forced to surrender. It was the site of the longest siege in the First World War. In the game, Przemyśl sees players fighting around large fortifications, gun emplacements, and high brick walls, in contrast to the open battlefields of many Tannenberg maps.

Custom made for consoles Everything from performance to the control scheme has been optimized for consoles, with quality equal to the well-received Verdun Remastered that was released a few months ago. Even better, Tannenberg will take full advantage of the greater power offered by the PlayStation 4 Pro, and the Xbox One X.

Developer and M2H co-founder Mike Hergaarden said: “We’re proud to release our first fully in house console releases on Xbox One and PlayStation 4 today! Building on the experience gained with our popular remaster of Verdun, we have reworked everything from the UI and controls to in-game graphics specifically for each console. We can’t wait to see what the community thinks of the First World War on the Eastern Front!”

Tannenberg is part of the authentic WW1 Game Series, which puts great effort into capturing historical details. Players can get the game for €19.99 or get the WW1 Games bundle which on PlayStation 4 not only includes Verdun and Tannenberg but also 12 avatars from the series.

Players choose from a variety of historically accurate squads and weapons – with more available to unlock through playing the game – before diving into squad-based battles on the mud and blood splattered battlefields of dynamic World War One warfare.

Every game is built on a base of thorough research and receives extensive post-release support bringing new content and challenges for our players. The games in the series are linked, but each one is standalone and provides a different experience, reflecting the nature of the fighting in the many-sided theaters of the war.