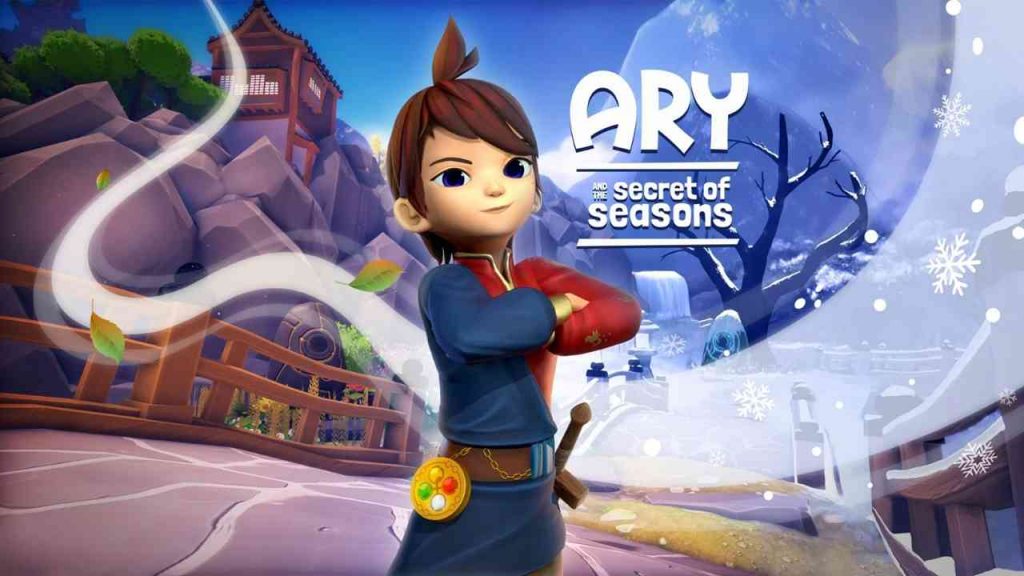 Ary and the Secret of Seasons PS4 Review – Get ready for some unique puzzling and platforming with Ary’s season-wielding powers. Did Ary melt or hearts or turn them to ice? Let’s find out.

Ary and the Secret of Seasons PS4 Review

As the game’s name suggests, our protagonist is a little girl called Ary. With the help of four crystals, she can manipulate the seasons (spring, summer, autumn, winter). The game cleverly implements this season-changing ability into its environmental puzzles. For example, you can cast winter to freeze bodies of water – or do the opposite and cast summer to melt ice. It’s quite unique and unlike any puzzle-platformer, I have played before.

With colorful graphics, cute cutscenes, and soothing music it’s ideally suited for children. That said, the game provides ample challenge for adult gamers, too. The puzzles are hard enough that I got stuck for a few minutes on multiple occasions. Sometimes it was confusing where to go or how to advance. While it’s a single-player game without split-screen, I could totally see it as a fun family activity where parents help their children solve the puzzles.

And when I say puzzles, that means environmental puzzles. Every puzzle is somehow linked to manipulating the seasons around you (with some platforming sprinkled on top). For children under the age of ten, it may be a bit tricky on their own. Especially later on when you have access to more abilities the puzzles get more complex.

Story is also a big part of Ary. When the seasons get disrupted and her father – the guardian of winter – can’t go to a council meeting, Ary wants to go in his place. Even though her mother doesn’t allow it and says “it’s not tradition for girls to attend”, Ary puts on her brother’s clothes to disguise as a boy and off she goes. The grownups constantly belittle Ary and tell her she can’t do something.

That doesn’t stop her though. On the contrary, her courage rises every time she is told that she can’t do anything. Just like her dad, she wants to help guard the Crystals of Seasons and restore the weather balance. On her journey she will go through many areas, from lush meadows to towns and puzzle-filled dungeons.

A Zelda-like On A Budget

The gameplay structure reminded me of Zelda: it’s a mix of exploration, puzzles, platforming and combat sections. I liked that exploring actually feels worthwhile. You can find new items, money to spend at merchants, and other collectibles or power-ups.

While there is some combat, you should know that 90% of your time will be spent solving environmental puzzles and platforming sections. When there are enemies, you can simply run past them. There’s no reward for defeating them anyway, making them a risk not worth taking. The combat is simplistic, yet suitable for this type of game. You use Square to attack, Triangle to parry, Circle to dodge. If you get hit you lose a life.

What I like most is the exploration and I always wanted to take a moment to look around new areas and talk to everyone. The game doesn’t do much hand-holding either. Too many games these days are trying to be overly accessible that in doing so they take away any sort of challenge. The fun in Ary is the exploring things yourself, without constant tutorials or popups. The fun is getting stuck and then having a sense of accomplishment when figuring out the next step.

If you lose track of where to go, there is an in-game map (and a mini-map with your next quest waypoint). The thing is, the main map is quite hidden in menus within menus, requiring more clicking than it should. The World Map and Quest Tracker are a tab within your inventory (first you open the pause menu, then the inventory, then press R1 to switch to the Map and again R1 to get to the quests).

It would have made more sense if you could open the map with a press of the touchpad, or if you could select it directly from the pause menu instead of going through the Inventory each time. While I tried my best not to look at the world map during the story (after all, exploration is where Ary shines), it can be a nuisance when you go for 100% completion.

As for the technical performance; the first thing I noticed right off the bat was excessive screen tearing. It was so bad that it gave me a headache and made my eyes hurt the first day of playing. It takes a while getting used to this. The issue is constantly noticeable when moving the camera left/right. Below is one such image showing the issue on PS4 Pro. The frame-rate is also sloppy and there’s ugly flickering around the edges of buildings/structures. Seriously, none of this should be an issue for any game in 2020.

On top of that, the game is quite unstable under Patch 1.01 (the patch available at time of this writing). Don’t be surprised if you run into a bunch of bugs and graphics glitches along the way.

On that note, it’s worth mentioning Ary only has 5-10 developers actively working on it. For that, I was impressed with the size of the game and how much there’s to do. You can expect a playthrough to last 10 hours or more. Going for 100% completion will add a few hours. There’s even a trophy for speed-running the game in under 5 hours!

Ary is still a little rough around the edges, but a few patches down the line I could see it being a 7.5 or an 8, especially if you are looking for a Zelda-like puzzle/platformer hybrid or want a kid-friendly game.

Ary and the Secret of Seasons is out now on the PS4.

Clearly a labor of love, Ary unites puzzles, platforming and exploration into one round package. Although its technical issues are a bit off-putting at first, if you can look past them, there’s much fun to be had.