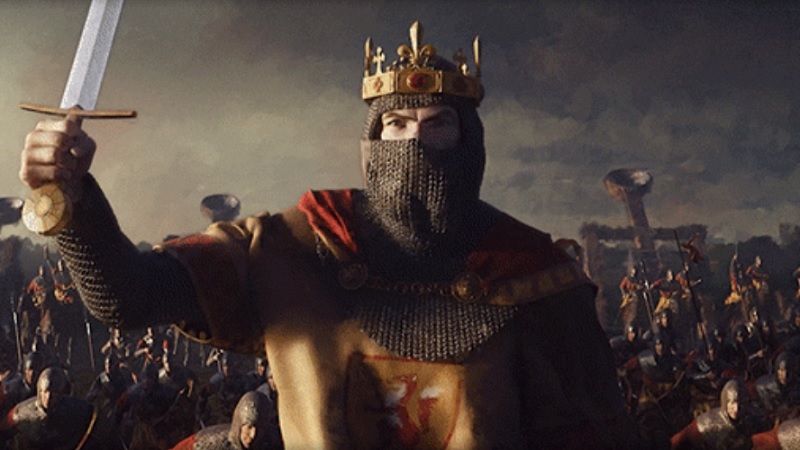 Crusader Kings III PS5 Review. A quick scan of the opinions that PC gamers have had regarding Crusader Kings III would reveal a game that is seemingly at odds with its super serious, po-faced historical subject matter. “My Grandson had a child with his mom” one such review states while another gleefully exclaims that they created “a dynasty of incestuous pirate witches who are also religious fanatics.”

Perhaps of all of them, there’s one Steam review whose commentary will be keenly felt by most who aren’t fans of strategy games in general is the one which ends “so don’t even ask me how to play, I couldn’t even tell you because I’m doing my best, and I’m having a blast.” And this is crucial, not least because Crusader Kings III is not only a super sophisticated, endlessly deep tactical affair, but also one that permits such a wide variance of experience that everybody, regardless of their affinity to the strategy genre (or competence at it), can get something from.

For my own part, the real excellence of Crusader Kings III lay in how it salts its tactical gameplay with emergent storytelling that bleeds from one playthrough into the next. In one such playthrough, my ruler had a romantic dalliance with a lady from a rival kingdom but because I decided to ‘roleplay’ a complete a-hole, promptly kicked her to the curb and took up with another match that I deemed would be better for my realm from an economic perspective.

After many decades of fairly prosperous rule, I soon found myself besieged by mighty army from the east led by, you guessed it, my errant sprog, who in the name of his dear old ma proceeded to murder me and take all of my holdings. The kicker though, is that for the next playthrough I started off playing as my vengeful (and now extremely rich) son, and so you can see just how compelling Crusader Kings III can be. 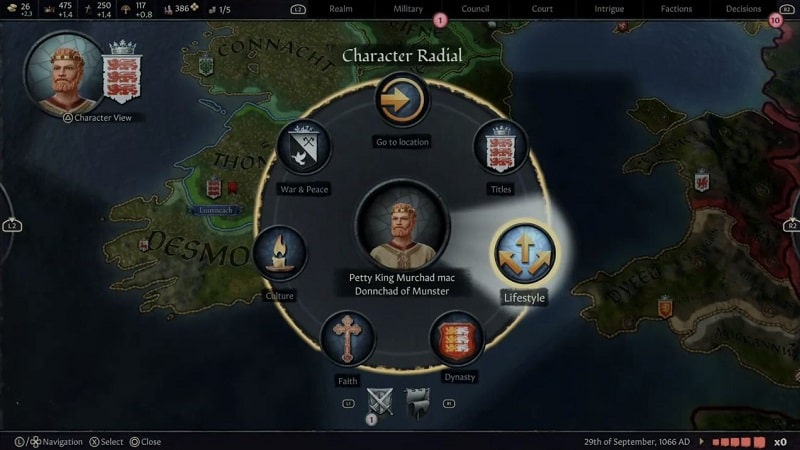 Quite unlike other tactical fare, losing a battle, a war or even your kingdom in its entirety is not ‘game over’ in Crusader Kings III. Essentially, the game ends when your dynasty does, so whether you’ve got an unbroken line of succession, or a hidden and forgotten bastard progeny exiled in some far flung country (cough), you can still keep on playing – which is a hugely refreshing state of affairs to say the least considering that other strategy games have far more rigid fail state criteria.

Even better still, your dynasty can carry on in a number of interesting ways all of which can provide monumental changes to the scenario. You could find yourself murdered by a disowned son or daughter that in disposing you, now allowing you to control their fate and chart an all-new course through history as a result. Speaking of which, as one might expect, running your own kingdom, let alone one that is expected to endure over the course of centuries, is quite an undertaking and Crusader Kings III provides players with no shortage of concerns to worry about in a bid to keep their kingdom prosperous.

Much like history tells us, the rise and fall of any kingdom worth its salt is often a kaleidoscope of diplomacy, military action, marriage and oodles of good old fashioned skulduggery – and in each of those worldly disciplines Crusader Kings III does a great job of putting the player in control. From managing tax levies on your general populace, to balancing public opinion on your actions, maintaining your economy and keeping folks happy, Crusader Kings III excels not because you’ll be able to balance all of those plates successfully, but because over a long enough period of time you won’t and when they come all crashing down is often when Paradox Interactive’s latest tactical effort is arguably at its best. 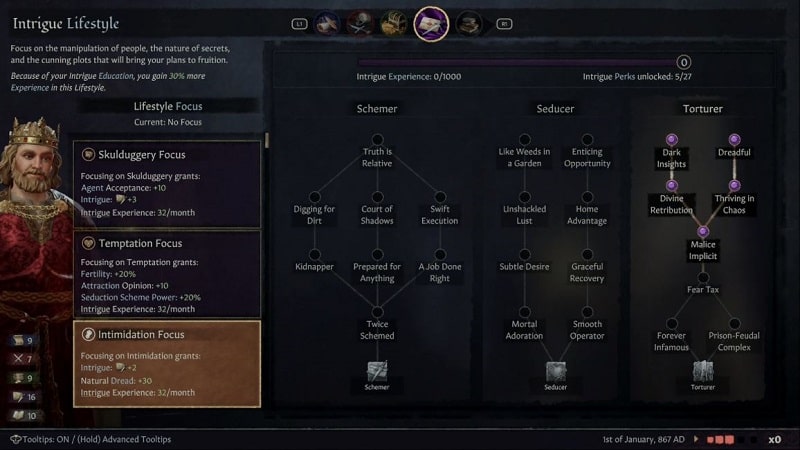 Sure enough, each of these strategy elements you could argue are common to other genre efforts but where Crusader Kings III excels especially is in how everything coalesces into a grandly satisfying whole. Raising an army and then sending it into battle to conquer a neighbouring country might not endear you to your subjects right away, but the resulting economic bounty that you could obtain could swing opinion in your favour and allow you to move into a position of greater strength moving forward. Everything is about trying to think two or three steps ahead and the sensation of outwitting a particularly tenacious foe on the world stage is satisfying to say the least.

There’s just so much to take in with Crusader Kings III that you feel like you’re always learning new tricks and approaches to various situations. Whether that’s learning how to incite a holy war, going off on a pilgrimage to please the Pope or sharpening up your understanding of diplomacy, intrigue and the world at large – you can be sixty hours into Crusader Kings III and still feel like you’re coming across an array of concepts for the first time.

The Holy Grail Of Narrative Driven Strategy Gaming On Console

Then there are the different starting points that Crusader Kings III presents the player with. Rather than beginning each dynasty as a blank slate, Crusader Kings III allows players to choose from a variety of ruler archetypes that each have their own strengths, weaknesses and special traits – such as an affinity for diplomacy or militarism – that can help to define your playstyle if you’re uncertain, or bolster a chosen avenue of rule right away.

There are so many variables for armchair monarchs to concern themselves with that acclimating to everything can prove quite a towering challenge – especially if you’re new to the grand strategy genre at large. Thankfully a handy tutorial helps out in this regard, but with so much information to absorb it soon becomes clear that after that initial data-burst the best way to learn is simply to play and play often. 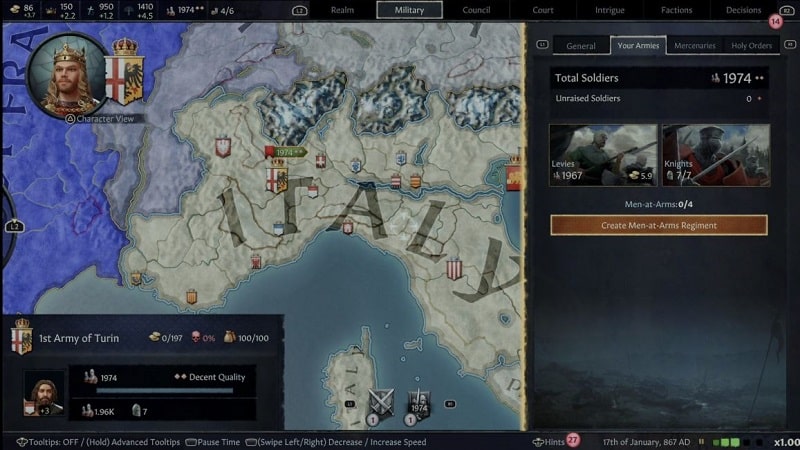 Speaking of which, with its PC origins so clearly visible on its digital sleeve, it makes sense that with the full fat Crusader Kings III experience essentially being brought to console without compromise that arguably the main learning curve is one that concerns the user interface. Quite simply, Crusader Kings III is absolutely flooded with all manner of menus, submenus, frames, tooltips, icons and more – and trying to smoothly navigate it all via a DualSense controller can prove to be something of a staunch challenge in the early going.

Thankfully, Paradox has both ample experience and pedigree in this regard, having also brought us another excellent grand strategy effort in the form of Stellaris: Console Edition which released for PS4 back in 2019 and boasted a supremely intuitive control system which translated well to the humble DualShock 4 controller. With Crusader Kings III those valuable lessons have been brought forward and embedded into its PS5 debut, resulting in a tactical effort that while imposing at first, soon becomes second nature as the minutes turn to hours, the hours into days and then into weeks and beyond.

What makes Crusader Kings III succeed in ensnaring the interest of those outside the strategy genre, while also maintaining the attention of its legion of fans, is the roleplaying aspects that are now generously threaded through the game. With Crusader Kings III developer Paradox hasn’t just lain a massive map for wannabe megalomaniacs to plan their world domination, but have also provided an often hilarious theatre within which players can play out their very own drama-laden stories that span continents, dynasties and the course of history. To be terribly reductive for a moment, Crusader Kings III is basically a Game of Thrones simulator and I’m massively OK with that. 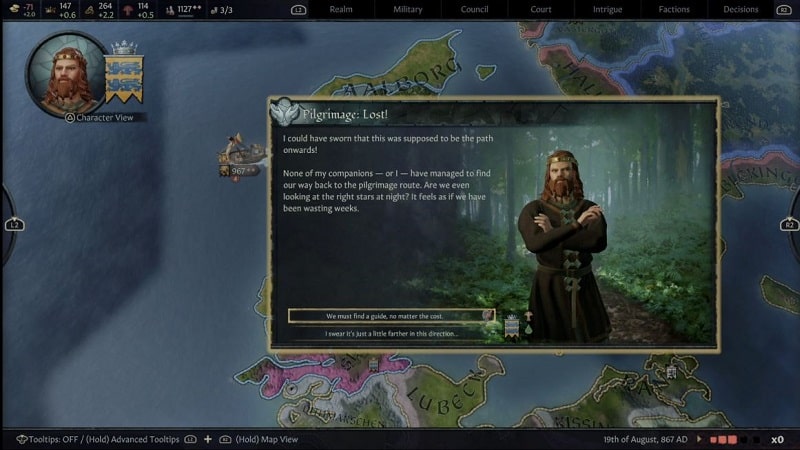 It’s testament to dynamic and emergent storytelling possibilities that Crusader Kings III affords to the player, that the innumerable stories that can emerge from are better than a lot of games that unfold with more rigid scripting. But more than that, what Crusader Kings III promises is freedom above all else. Freedom from rigid objectives, freedom from genre norms, freedom to rule how you like and perhaps most importantly of all, freedom to fail how you like, too.

But here’s the thing, the fact that developer Paradox has fashioned a meticulously researched and mega deep strategy effort set in the Middle Ages shouldn’t deter you if you’re not into the genre. The degree of creative latitude that Crusader Kings III possesses is such that no matter your exposure to the strategy genre, you can always get something roundly entertaining from the game itself – whether that’s executing a long-term gambit to overthrow a neighbouring monarchy, or establishing a long-running dynasty of incestuous cannibals for no other reason than for lols, Crusader Kings III is a thoroughly excellent and endlessly engaging strategy game that everyone can enjoy.

There is absolutely nothing like Crusader Kings III on console and developer Paradox should be commended for bringing what has previously (and erroneously) been pigeon-holed as a nerdy genre that is the sole domain of anorak wearing PC enthusiasts to console in such fine form. Pointedly, by including such deeply embedded role-playing elements in Crusader Kings III and thus making it much more approachable than any of its more decidedly hardcore predecessors as a result, Paradox have also created something of a gateway to bring traditionally non-strategy fans into the genre at large to boot. Like strategy games? Get stuck in. Don’t like strategy games? Get stuck in anyway.

Crusader Kings III is out now on PS5.

There is absolutely nothing like Crusader Kings III on console. By including such deeply embedded and emergent role-playing elements in Crusader Kings III and thus making it much more approachable than any of its more decidedly hardcore strategy predecessors as a result, Paradox have also created something of a gateway to bring traditionally non-strategy fans into the genre at large. Oh and it's basically a Game of Thrones simulator to boot. Which is nice.