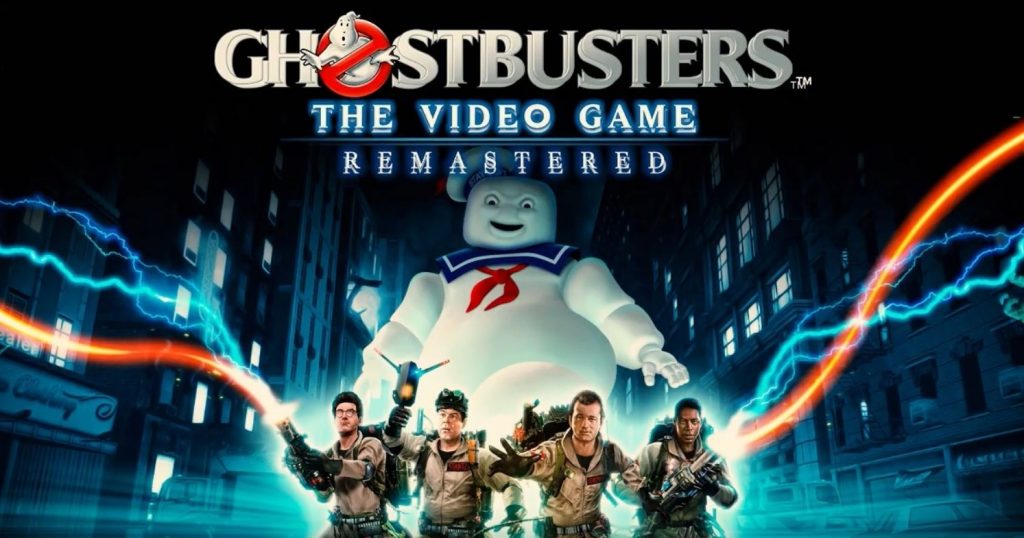 Rare are the video games based on movies that aren’t terrible. Rushed to market to cash in on the popularity of a property, they usually deliver an uneven mess of shoehorned mechanics, awkward cinematics and buyers remorse. Very rarely however, some not only live up to the promise of the original movie but are considered worthy entries in the franchise themselves. In this Ghostbusters: the Video Game Remastered stands head and shoulders above the rest.

Right up front, if you’ve already played Ghostbusters: The Video Game back in 2009, you know exactly what’s in store for you. You won’t be disappointed in the remaster either; the game has never looked this good or played so well. If you’ve somehow missed out on this gem in the last ten years, then get ready to suit up because you’re in for a treat.

Further reinforcing the game’s position as de-facto sequel, Ghostbusters Venkman, Stanz, Spengler and Zeddemore both look and sound like their counterparts, as voice acting is provided by the original cast members, Bill Murray, Dan Akyroyd, Harold Ramis and Ernie Hudson respectively. Even Annie Potts returns to voice the irascible receptionist, Janine Melnitz, and William Atherton as the love-to-be-hated government stooge, Walter Peck. Though Rick Moranis and Sigourney Weaver are notable absences from the original cast, the team is joined by Alyssa Milano as the mysterious Dr. Ilyssa Selwyn, and Max von Sydow takes on the booming voice of the semi-animate painting of Vigo the Carpathian!

Fun fact: It was Bill Murray’s enjoyment of recording for Ghostbusters: The Video Game that he credited for changing his mind on ever returning for a possible Ghostbusters sequel.

“If there’s a steady paycheck in it, I’ll believe in anything you say.”

As the “Rookie” at Ghostbusters HQ, the player is quickly established as a trainee/guinea pig for all kinds of new equipment (read: dangerous, probably illegal) that the Ghostbusters will need to contain a strange new paranormal event endangering New York. Your “on-the-job training” serves as your tutorial, with the full team co-operating to show you the ropes of ghost wrangling and capture.

Though you are a nameless and silent protagonist, the Rookie always feels like part of the team due in large part to the fantastic game design and the constant banter of the characters around you. They praise you when you do well, comment to each other on your performance, and even give you lowly scut work to do because you’re the new guy. They warn you when a ghost is trying to ambush you, so you’ll know which direction to turn, and give advice on strategy and potential tactics. Framing the hints you might get in normal gameplay as advice from a seasoned Ghostbusting professional is a wonderful design choice, and further draws you into the experience.

As the mystery of the strange supernatural event at the World of Gozer exhibit unfolds, Ghostbusters: The Video Game Remastered takes the player on a tour-de-force of classic Ghostbusters moments. Chasing the escaped Slimer to its original haunting, the Ghostbusters will return to the Sedgewick Hotel, deftly evoking the original movie with in-jokes and gags that every fan will appreciate.

You will also return to the New York Public Library and face the first ghost ever encountered by the Ghostbusters, The Gray Lady, so that Egon and Ray can earn their vindication. And what game would be complete without a visit from the Stay Puft Marshmallow Man? The team will follow the mystery of the infamous architect and Gozer worshipper, Ivo Shandor, wherever it may lead them. Inflicting thousands of dollars of damage to the city, Ghostbusters team will battle ghosts and spectres of all shapes and sizes through Times Square, Central Park, the Museum, Even to other planes of existence!

“That would have worked if you hadn’t stopped me.”

From the moment you suit up, it’s obvious that Terminal Reality takes the job of adapting Ghostbusters seriously, with an incredibly detailed proton pack glowing on your back, a loving recreation of the Firehouse HQ, and the gleaming lines of ECTO-1 available immediately for your examination. The attention to detail doesn’t stop there however, as they have also put just as much love and care into the gameplay.

The classic proton stream is just as wild and chaotic as it is represented in the movie, doing considerable damage to the walls and contents of every room in which it’s used. Capturing a ghost in a trap always feels like a struggle (in a good way), with the ghost clawing to escape the trap’s pull and the player having to maneuver the stream to counter its effort, much like a fish fighting on the end of a line. The stream always feels as though it has immense power that’s operating right at the edge of the player’s control, and yes, crossing the streams is still bad.

Added to the player’s weaponry are new prototype weapons such as the Slime Blower, Meson Collider, Boson Dart, and Shock Blast, all of which show as modifications and configuration changes to the proton pack. The original design has been extended logically, so elements that were never explained have a real function in the game, and serve as a visual indicator to show which weapon you’ve got equipped. Each has a primary and secondary fire, and can be quickly switched between using the d-pad so that you can choose the right weapon to best exploit each ghost’s specific weaknesses.

These weaknesses can be discovered using another classic Ghostbusters gadget, the PKE meter. Getting a good scan of a ghost before you trap it will reward you with backstory, information, strengths and vulnerabilities from Tobin’s Spirit Guide. The PKE meter can also be used to track hidden ghosts, find magically obscured doorways, and locate cursed artifacts which can be sold for money. Spend your earnings from artifacts and trapped ghosts on R&D for new upgrades to your weapons, traps and PKE meter, making you even more effective at catching ghosts (and destroying public property).

“Listen… Do you smell something?”

The sound design of Ghostbusters: The Video Game Remastered is nothing sort of incredible. Ghosts, spectres, and animated entities all have distinct voices and sound effects, ensuring that you’re already afraid of the danger that you haven’t seen yet. All of the sound effects for the gadgets like the proton packs, plasma streams, PKE meters, etc. are taken straight from the movie. The new weapons all sound fantastic, and are not overwhelming or repetitive even when in combat with four other Ghostbusters. What’s remarkable is that team chatter is always clearly audible over the sound effects, with the actors ‘yelling’ voices not overtly increased in volume. The balance is subtle but incredibly effective, allowing the teams strategic calls and clever one-liners to feel natural even in the thick of battle.

Finally, the musical score from the original movie is used throughout the game to great effect (including the classic Ghostbusters theme song by Ray Parker Jr., which has lost none of its potency as an earworm). Many of the original tracks and musical cues have been used or remixed in the game, with new compositions following the same themes as the originals, making them blend in seamlessly with the more familiar tracks.

“And the flowers are still standing!”

Though the remaster’s higher resolution exposes one or two textures that aren’t as detailed as they could have been, for the most part the higher resolution and frame rate greatly enhance the experience, bringing new attention to a gem of a game that didn’t get the attention it deserved in the previous generation. The game ran at a stable 60FPS with no slow-down or tearing, although there were one or two technical issues when returning to the main menu that will likely be addressed in a patch.

The only major omission from the original game is the lack of multiplayer, which in the original 2009 game had actually delivered surprisingly well designed gameplay modes for what was ostensibly a ‘tack on’ secondary feature to a single-player game. It is somewhat disappointing to have the opportunity to relive those multiplayer memories in a freshly tuned game, but ultimately it is not a deal breaker for your enjoyment.

Ghostbusters: The Video Game Remastered is out now on PS4, Xbox One and PC.

Written by and starring the original cast of Ghostbusters, Ghostbusters: The Video Game Remastered is simply the best video game based on a movie property ever created. With fun gameplay and bizarre events, this is the closest you’ll ever get to strapping on a real proton pack.