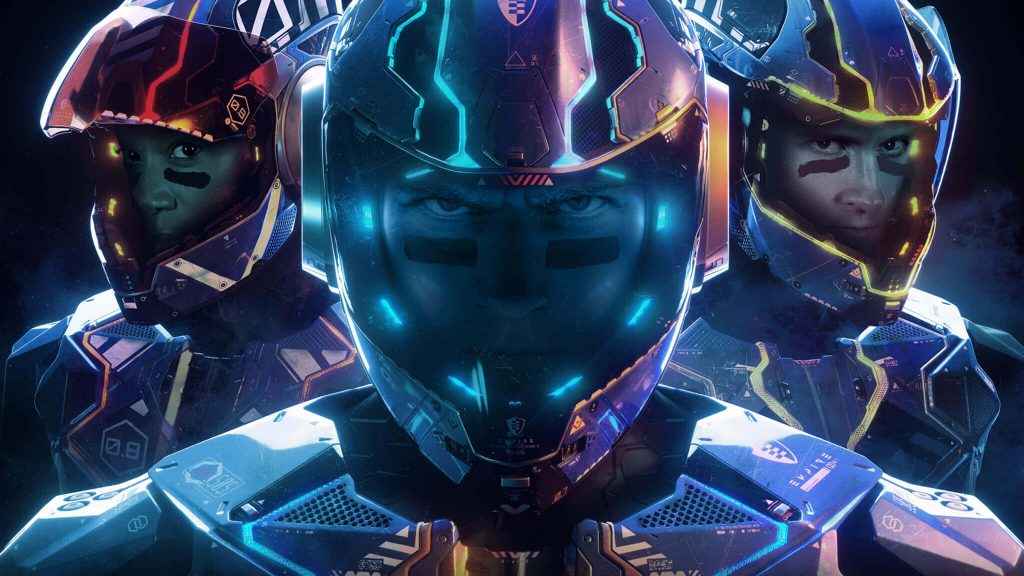 The year is 2150 and a new, deadly competitive sport has swept the world. Neon-lit arenas are packed to the rafters with cheering supporters as the Sparks, Nitros and other supercharged teams don their electrically-charged suits and attempt to fry their opponents.

Brought to us by the team behind the brilliant OlliOlli series and NOT A HERO, Roll7's Laser League is a competitive multiplayer sports game. Presented from the top-down perspective, you join one of two teams and enter a futuristic arena with the aim of eliminating your opponents with laser beams.

The premise is simple. You run around the arena in teams of two or three, competing over three rounds to be the last team standing. By running over laser nodes, you activate laser walls which extend out in your team's colour.

The walls also move, and the idea is to avoid your opponent's walls and force them to smash into yours. Hit a wall, and you die. Once all team members of one colour are dead, it's round over.

There's so much more to it, though. Before you begin, you can choose from a variety of classes that have unique abilities and offer a futuristic spin on some of the traditional classes that you see in games such as Overwatch.

You've got Smash, who wields a shield which can be used to bash into other players sending them flying into laser beams, and Thief who can steal an opponent's node. Meanwhile Shock can send out a radial blast of electricity to stun opponents, and Snipe can lay down a warp point in the arena and use it to teleport. Ghost can use his invulnerability to walk through opponent's lasers, and last but certainly not least, Blade can use his laser sword to slash down opponents.

On top of that you can also choose modifiers for your class, such as Hunter which recharges your ability quicker when playing as Blade, or Smash's armor modifiers which makes him temporarily invulnerable. Each class currently has two modifiers you can choose from, and there’s plenty of time in the multiplayer lobby to discuss your strategy with other players before the action begins.

Gameplay is fast and furious, and what starts out as a rather disorientating game of essentially just running around avoiding lasers, soon turns into a compelling game of strategy. The classes are balanced and work extremely well together, and it's clear that the best teams will be the ones that choose their classes wisely and bring a mix of tactics into the arena for each battle.

Reacting quickly, using your abilities at the right time, and paying careful attention to the positions of laser beams, laser nodes and both sets of teams in the arena becomes essential as the gameplay is so fast that you don't have much time to make split-second decisions. Consequently, it makes for an exciting game of cat-and-mouse as you work together to take down your opponents.

There's so much to think about – with the constantly shifting laser walls, you need to move around quickly to avoid them. Then you need to keep an eye on new laser nodes popping up to activate them before your enemy, and choose exactly the right moment to use your ability, which also has a cooldown timer.

For example, Shock a player just when a moving laser wall of your team's color is coming towards them and they'll be powerless not to get fried. Choose the exact angle to use Shield to smash a player into a laser beam behind them, or activate your Ghost invulnerability at exactly the right second to get yourself out of an area where you're surrounded by lasers, or to survive an attack from your opponent's Blade. All these decisions need to be made swiftly, and when you pull off a move that kills your opponent it feels very satisfying.

In many matches, as you start to understand how these classes work in conjunction with other, you soon start to team together to create combos - perhaps a shield bash, followed up by a teammate's lunge with the blade. This focus on teamwork extends into revival. Each round isn't over until all teammates are dead, and you can revive them as many times as you like. So, there’s yet another thing to think about as you decide whether to activate nodes and power-ups, or make a dash to save a teammate.

Power-Up Your Play In Laser League

That's not all! Appearing randomly in the arena are game-changing power-ups which affect what's happening with the walls. Your reactions have to be spot on as you and your opponents race towards each power up in an attempt to get the upper-hand and change the course of the battle.

There are 16 power-ups in total, including Pause which stops all the walls moving, and Switch that inverts the colors of the laser wall - in this case, depending on how many walls you have out there, you might want to trigger this or defend it! Then there's Speed, which dramatically speeds up how quickly the lasers move, and Reverse which sends all lasers moving in the opposite direction. What started off looking like a rather basic futuristic sports game, quickly became a multi-layered, addictive challenge that kept us going back for more.

Though the action is tense and the gameplay is challenging, Laser League makes it so simple to just play. In terms of controls, all you're really thinking about is using your thumbstick to move around the arena and then hitting the R1 button to activate your ability. Other than that, it's all about your movement and quick reactions. It's this blend of simplicity and depth that has the potential to make Laser League one of the stand-out multiplayer sports games of the PS4 generation.

Laser League has some customisation options too, though certainly not on the same scale as one of this generation’s most popular competitive sports games, Rocket League. There's various player models, emojis and laser textures that you can unlock by earning XP in matches, so there's a degree of personalisation. However, character detail is somewhat lost due to the top-down viewpoint you see in the arenas, which kind of makes every player look the same – apart from when you're in the lobby.

In terms of multiplayer maps, there's currently 12 maps set in three arenas, such as the Empire Campus in London where four huge digital statues of lions sit in every corner. The arenas feel alive with the crowds in the background jumping up and down cheering as you enter, though when the action starts the top-down viewpoint focuses purely on the action.

This does make every map feel samey – the difference between them is really about the way the lasers are calibrated, which makes for a varied gameplay experience. We're definitely looking forward to seeing some different arenas in future updates, and more game modes – at launch you can only play 2 vs 2 or 3 vs 3 – but it's a decent starting point for a game that has a vision to evolve alongside its community.

When you do start a match, the hypnotic beats of the soundtrack pump along nicely in tune to the action. However, it would definitely be nice to hear some more variety and be able to choose from different soundtracks as it gets incredibly repetitive.

Overall, we've had a great time playing Laser League. It's got that one-more-go, pick-up-and-play appeal, and the more we've played it, the more we feel ourselves being sucked into its competitive gameplay. The action is tense, gameplay is challenging and the controls are silky smooth, and even at this early point, we're already looking forward to seeing what happens next for Laser League because its future could be very bright indeed.In terms of gameplay, it’s super polished, but there’s definitely room for its evolution, specifically with more game modes to encourage competitors.

Fast-paced and fun, Laser League is simple to play, yet challenging to master. It's super addictive and has all the hallmarks of a competitive multiplayer game that could well have a future in the world of eSports if the community embrace it.