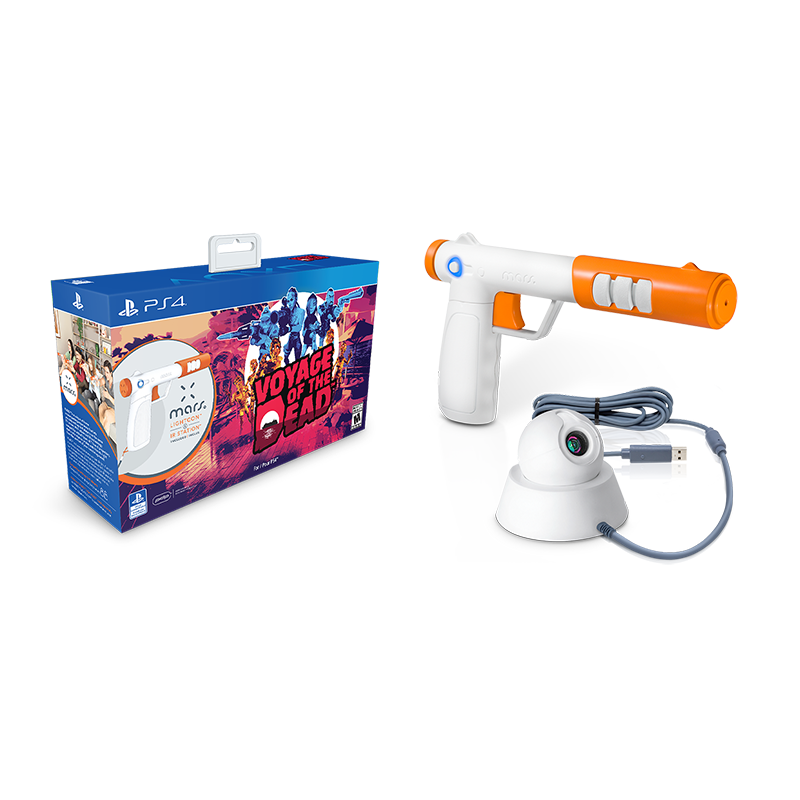 In a time when text messaging and social media are often the preferred means of communication, it’s no surprise that online gaming has almost entirely replaced the more intimate days of couch co-op, LAN parties, or even going to an arcade. I completely get the attraction of online gaming, sometimes after a long day of work, I just want to unwind among the masses from the comfort of my recliner. However, every once in a while, it’s nice to get together in a more intimate setting with friends and relive the past when multiplayer only included the people in your living room.

The MARS arcade-style lightgun gaming experience from PDP lets you and up three of your friends go head to head in a co-op showdown that is surprisingly easy to set up. MARS is available now for PS4 and Xbox One and launched with three titles: Voyage Of The Dead, Qubit’s Quest, and Big Buck Hunter Arcade.

The MARS arcade starter kit comes with one LIGHTCON (lightgun), the camera known as the MARS IR station, and one of the three launch titles. The starter kits retail for $99. Additional LIGHTCONS can be purchased for $24.99. All games are available digitally on PSN for $19.99.

The MARS system is a snap to set up. You can plug the MARS IR station into any available USB port and place it almost anywhere as long as it is facing your TV. Once powered up, the camera light will blink indicating it is ready for your LIGHTCON to be paired. The LIGHTCON is powered by two AA batteries. After turning the gun on, hold down the Trigger and Back button simultaneously and hit the Power button once. The light on the camera will stop blinking, indicating the pairing was a success. Repeat this process for every LIGHTCON you have.

When you fire up one of the MARS launch titles, you are greeted with a calibration screen. Move the camera until the logo projected from the IR Station is one with the image on the screen. The head of the IR Station can be tilted up or down, which is useful if you need to place it on the floor. Rotate the body of the camera as needed, and once the images match, the game will start. If you are having issues calibrating the IR Station, try different locations and be sure to turn off any bright lights in the room.

I experimented by moving the camera in different places, high and low, close and far from my TV, and each location paired with very little effort; unlike my PSVR which is a constant source of calibration hell. I had the best and most responsive results with the IR Station being close to the center of my TV and as far back as the cord would allow.

While the camera is tied to the PS4 by a cord at all times, the LIGHTCONS are completely wireless. If the LIGHTCON becomes wonky and starts to drift, pausing brings up the option to recalibrate. Or, if the camera is moved during gameplay by your cat, it automatically pauses and allows for re-calibration.

Lightgun technology for the home pretty much died with the CRT TVs, but the wizards at PDP have found a way to bring it back to modern TVs through new technology. I’m really impressed at the accuracy of the guns when the system is properly paired. If you ever played on a Wii console, you know the struggle of Wii remote lag. It’s almost non existent with the MARS system.

The LIGHTCONS are well designed but not bulky or heavy. All hand sizes should be able to comfortably use the guns. Despite being an American, I have never held or shot a real gun, but the reloading of the LIGHTCON is done by pulling back on the gun’s barrel, which seems like a realistic behavior. Even if it is not, it’s a pretty neat touch.

Out of the three games, my favorite was Voyage Of The Dead. It’s a fun, quirky zombie shooter that takes place on a cruise ship and includes eight playable characters and an impressive amount of weapons to slay the undead with. Voyage Of The Dead features a campaign as well as several other modes, which are playable solo or of teams up to four. There is a few versus modes that require at least one other player. Solo or with team, this game is a system seller.

Qubit’s Quest is a unique third person shooter, action-platformer where your mission is to protect an adorable robot dog named Qubit. Featuring a campaign for one or up to four players, the game also includes ten mini-games that makes it ooze with replay value. Qubit’s Quest is the family-friendly title of the MARS games, but it is still great fun for all ages.

Lastly, that brings us to the third and final MARS game, Big Buck Hunter Arcade. Not only is it my least favorite of the three, it’s also the game that gave me the most technical issues. I’m not really into the whole hunting culture (I know take my American citizenship away right now), and shooting animals in games makes me sad and I try to avoid it when possible. I could never properly get the game to calibrate and almost all of my shots were missed. You can play Big Buck Hunter Arcade without the MARS system, and that really wasn’t much better. So, I think the issue is with the game itself, not the system.

The MARS system isn’t perfect. You will have to calibrate often, and the lack of games might be cause for concern, but it’s a super fun and cool bit of tech. There’s a high replay value to the games. Just like the Wii did, it will bring together friends and families no matter what level of gamer they are. If PDP can continue to deliver games like Voyage Of The Dead and Qubit’s Quest, the MARS system could be the must have accessory for the PS4.

For the purposes of this review, PDP has kindly provided me with not only the core MARS System but all three launch games and some extra LIGHTCONS.

The MARS system is out now on PS4 and Xbox One.

The MARS system from PDP is set on bringing the lightgun arcade experience back to your living room with an easy to set up camera and peripheral that can be enjoyed by the single gamer or co-op teams of up to four. The frequent re-calibrating it requires is at times a nuisance but it doesn't completely ruin the fun. Launching with just three titles might also set off buyer beware alarms, but If PDP can continue to deliver games like Voyage Of The Dead and Qubit's Quest, the MARS system could be a must have accessory for the PS4.