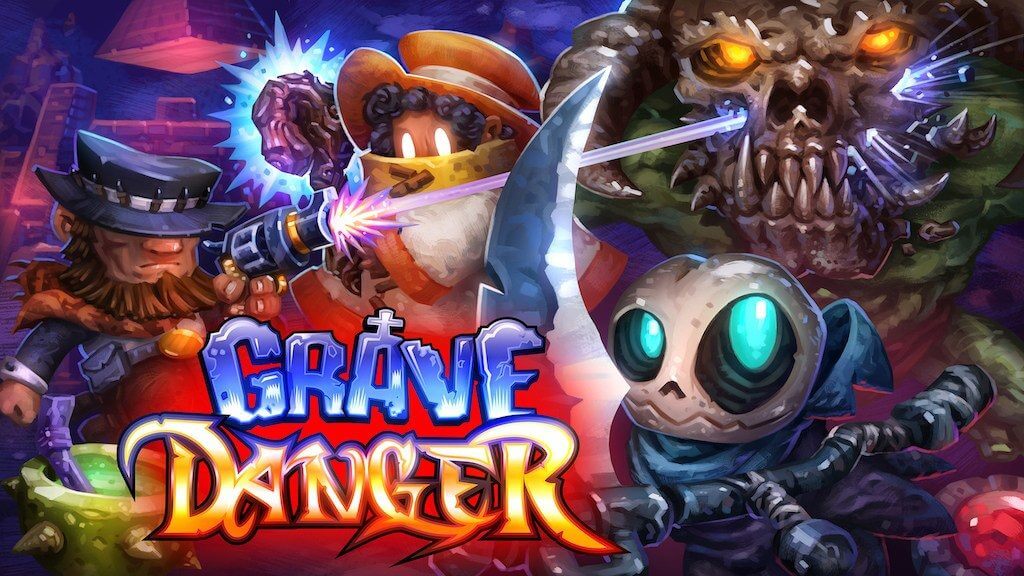 Grave Danger is an action platformer featuring three main characters all with different abilities. It’s a game of teamwork that you can play solo or with a co-op buddy. As different situations arise, your role is to decipher which character is needed and then switch back and forth between them until the baddies are defeated and all puzzles are solved in each level.

A Cowboy, A Wizard, and A Reaper Walk Into A Bar…

Dante the cowboy’s dash maneuver helps him dodge enemies and gather speed while his spurs allow him to climb walls, his weapon of choice is a revolver. Despite his name, Elliot is a powerful wizard who has a magical jump that also allows him to phase through enemies and double jump, his spells are projectile shots that range from many small, or one huge powerhouse of a blast.

Lastly, we have Malice the reaper who floats and glides while dropping spirit bombs and wields a scythe that can slash or be thrown like a boomerang that always returns. Our three heroes are charming and quirky outcasts that have been marked as outlaws by an evil skeleton king and they set out on an adventure to clear their name. While there’s not a Naughty Dog narrative to be found, Grave Danger does has a peculiar charisma that is refreshing, and Its offbeat sense of humor is endearing. The focus of Grave Danger is not the story but good old-fashioned 2D platforming.

The Dark Souls Of Platformers

Gameplay and controls are intuitive but don’t let the adorable animation fool you, the game is hard. You will die repeatedly sometimes and most frustratingly on account of your own stupidity. Upon death, your character turns into a ghostly figure that must get back to its grave, also known as the dedicated checkpoints, for revival. This is where the game lost some of its charm for me, as the checkpoint returns become super annoying and tedious.

The characters open doors and clear areas for one another, if one dies he has to return to his grave, and often the other characters will have to backtrack as well. I’m not going to lie, after a while in these situations, I found it easier to kill all the characters so they all returned instead of retracing my steps with the other two. It became even more mind-numbingly infuriating when one character had moved along to a different checkpoint. I do think a lot of that is perhaps due to the game being more designed for co-op play rather than solo. Unfortunately, as of this writing, I’ve not had the chance to grab a friend to give it a try. If you are a lone wolf, that shouldn’t discourage you from buying it as it is entirely possible to play alone, it just requires a little more time and effort.

Grave Danger has a distinct and gorgeous animated art style that reminded me of Tim Burton, and MediEvil. That comparison doesn’t stop just at the art, it’s irreverent sense of humor and wacky characters also reminded me of MediEvil. That’s high praise coming from me since the adventures of Sir Dan Fortesque holds a special place in my heart. Grave Danger is both charming and frustrating, at times I was ready to throw in the controller, but I continued on and in the end it was a decent experience, but one I think is probably better with a friend.

Grave Danger was developed and published by Spotted Shark Game and is available for purchase on PS4, Switch, and PC.

A teamwork based platformer that is full of charm and wit but might divide gamers with its unfortunate checkpoint system, and incessant backtracking.