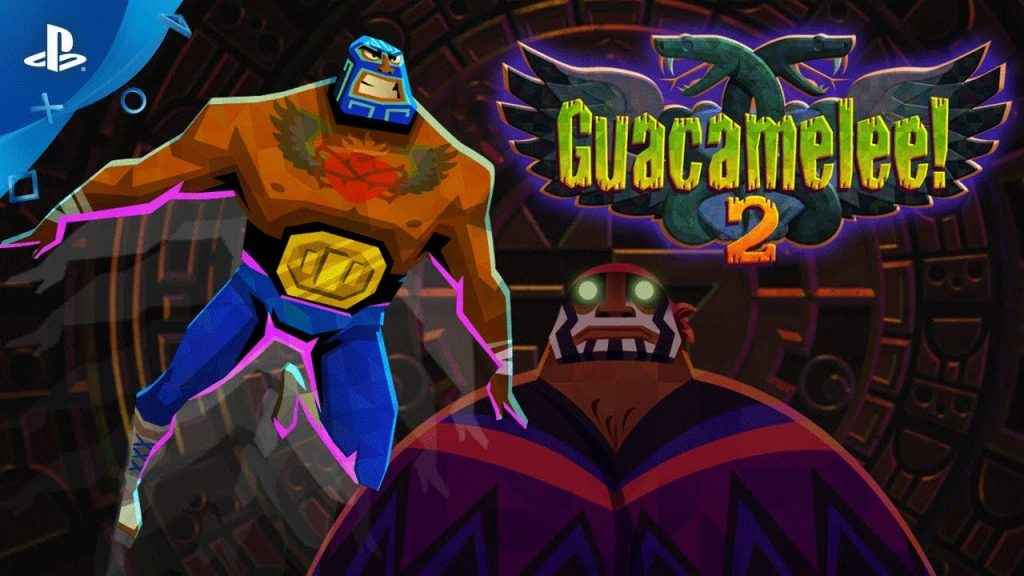 Guacamelee 2 Is The Sequel You’ve Been Waiting For

As Juan, the humble farmer turned super-hard matador from the first game, Guacamelee 2 kicks off seven years later where we find our hero reliving past glories, relaxing, chilling out and cultivating one heck of an epic beer belly. I mean, he can’t even do a double jump anymore – that is until things go deeply south of the border in a really big way.

When a mysterious and hugely powerful luchador topples the villain from the first game in an alternate timeline where Juan fails to do so, Juan is called back into action and must traverse across multiple timelines in order to defeat this new foe and restore order to the Mexiverse. That’s right – The Mexiverse.

As mentioned at the top of this wall of scribble, Guacamelee 2 is pretty much a no-brainer if you’ve played/enjoyed the first game. A 2D Metroidvania effort where you prance around a whole range of sublimely colorful levels, pile-driving monsters so hard they explode into coins and collecting new powers to allow you access to previously inaccessible areas, Guacamelee 2 takes the genre handbook, stuffs a fistful of naga chillies into it and then drenches the whole thing in tequila.

Indeed, the audiovisual presentation of Guacamelee 2 is very much in tune with that of its prequel, which is to say you should expect eye-searingly colorful visuals, great character designs, richly detailed Latin influenced backdrops backed by the constant energetic thrum of Mexican mariachi style music. In short, like its predecessor, Guacamelee 2 is one swaggering, tequila drinking handsome bastard of a game and it doesn’t care who knows it.

Guacamelee 2 doesn’t just look and sound the part, it also talks the part too. Absolutely taco-stuffed with references and extended parodies of other games, such as Limbo, Dragon Ninja, PUBG, Sonic the Hedgehog to name only a few, DrinkBox Studios clearly wear its love for contemporaries in the industry on its sleeve and it’s both hilarious and heart-warming to see them represented here.

Guacamelee 2 is hands down one of the funniest games you can get right now and has some of the worst puns this side of a Becky Lynch promo. I’m not even joking.

Getting down to brass tacks for the unfamiliar, Guacamelee 2 is a 2D platforming adventure that has you running, leaping and body-slamming your way through a variety of different towns, caves, underground fortresses and more as you seek to defeat the malevolent evil that has disrupted the Mexiverse (I love how that is a thing now).

Guacamelee 2’s Platforming And Combat Are The Real Deal

There are no procedurally generated levels or content here – every area, every secret and every monster placement in Guacamelee 2 is lovingly handcrafted, and while I have no issue with procedural generation as a design philosophy, every so often it’s cool to just have stuff made by hand y’know? Kinda like opting for a pleasant, home cooked meal over a Wendy’s triple cheeseburger, or something.

The platforming side of things in Guacamelee 2 is wonderfully robust. Juan begins with just a basic jump ability and as he proceeds through the game he earns new abilities that allow him to revisit old areas that he couldn’t access before. As a result, every time you get new ability such as a double jump, being able to punch through a wall, or turn into a chicken (I kid thee not – though series fans will have expected this), it all feels so genuinely rewarding that you can’t help but want to continue exploring to see what other areas are now available to you.

There’s an added incentive to do this too, as the rooms in which you’ll find various health, money and ability upgrades are basically platforming trap filled hellscapes that test your abilities to the limit and so provide a neat amount of extra challenge in the process.

More than just opening up new avenues of discovery, Guacamelee 2 never forgets that it is, at its heart, a fairly hardcore platforming effort. As such, the game seeks to weaponize the new abilities you’ve learned in increasingly difficult levels and challenges that all force you to switch from one ability to another in often split-second fashion, bolstering the fact that nobody quite manages combo-platforming quite like DrinkBox Studios does.

Being a luchador means more than just leaping about the place, it also means that you have free reign to beat up and smash your foes with aplomb. From furiously educated fists and feet through to a range of slams and other wrestling attacks, Juan has no shortage of ways with which to do away with the horde of enemies that stand before him.

It also matters how varied your attacks and how long your combinations are in combat too, because the more flashy you are, the more coins you’ll obtain which can then be invested back into five different skill trees. The kicker here however, is that each upgrade demands specific conditions to be met in addition to the requisite number of coins to unlock them, meaning that it behooves you to mix things up a bit in combat and keep your offensive arsenal nice and varied.

Guacamelee 2 Is A Remarkable Triumph

With up to four player co-op, supremely solid platforming and combat mechanics, a much larger offering than the previous game and some of the most vibrant audiovisual presentation of any game released this year, it’s fair to say that DrinkBox Studios have done it once again with Guacamelee 2.

In a month in which the all-conquering Dead Cells also made its PS4 debut, it’s remarkable that we should get another entry of such heady caliber so soon. Cementing the fact that DrinkBox Studios is one of the best devs in the business (as if the first Guacamelee and the superb Severed didn’t do that already), Guacamelee 2 is the only game cool enough to have a Piñata Golem in it. Just think about that for a second.

If you like platformers and Metroidvania style titles, this and Dead Cells are two of the biggest no-brainer purchases you’ll likely ever make. So get to it eh?

Guacamelee 2 from DrinkBox Studios is out bow on PS4 and PC.

Though it sticks rigidly close to the template that made the original such a success it ultimately matters little - Guacamelee 2 is one of the finest platformers of the year.