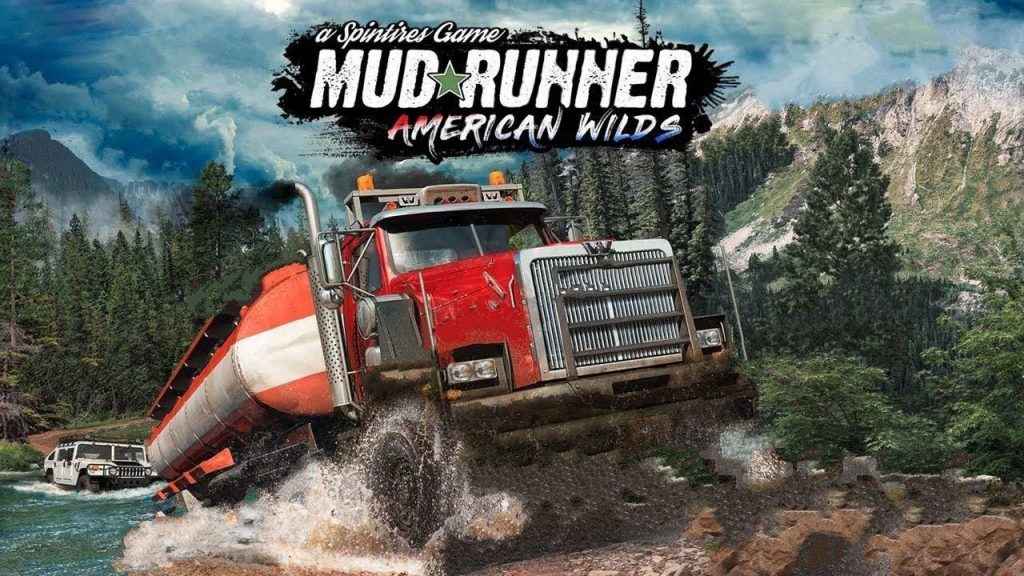 Spintires: MudRunner is not for everyone – that much is for sure. I mean, let’s be frank, in a simulator that is much more concerned with the struggle than it is about success or failure, it’s easy to see why a fair few folks might be turned off from its, shall we say, eccentic nature.

With just over a year on the clock since the release of the base game, developer Saber Interactive has been hard at work on American Wilds; essentially a Game of the Year style collection that collates Spintires: MudRunner and all of the DLC released to date into one big, mudstained package.

For the uninitiated Spintires: MudRunner is all about getting heffing big trucks, lorries and other improbably sized vehicles to a particular destination without tipping the hulking things over or otherwise causing damage to the cargo that you might be transporting. Eschewing arcade-style handling, Spintires instead embraces a simulation type model that prizes advanced physics and measured driving skills over just about anything else.

The net result of this approach is that Spintires can feel sometimes akin to a chore, rather than a driving experience that you’ll want to absorb into every atom of your being. However, initial impressions can be misleading because if you can push beyond that initial rush of “Oh my god why I am doing this?”, then Spintires soon reveals itself to be a thoroughly deep affair that rewards the amount of time that players put into it.

Luckily, Spintires provides an extensive tutorial that gets players used to the basics – such as releasing the parking brake (yes, this is a real thing that you’ll be doing a lot), dealing with advanced commands such as attaching a trailer, loading up cargo and, of course, driving through mud, rivers, and other such naturally occurring environmental hazards (but mostly the mud).

Rather than just permitting players to freely roam in the various areas of the American rural sprawl as they like (though you can do just this and only this if you want with Spintires sandbox mode), developer Saber Interactive has fashioned a wide range of challenges and missions around Spintires unique handling model and environmental hazards.

From hitching trailers to dropping off logs and even just carrying some luggage strapped to the roof of a car, the sheer amount of objectives and stuff to do in Spintires: MudRunner is extensive to say the least. The additional DLC that is included in this release beefs up the value even more, as it brings 9 new trucks to the fore, and packs in two more challenge and sandbox maps on top of that.

Extending the amount of things to do a good deal further is an unlock system which rewards players for dropping off logs and completing tasks that makes a wider selection of vehicles available to the player as a result, while a range of co-op modes allows players to help out one another to complete a range of different challenges in tandem. In short, you’ll not want for things to do in Spintires: MudRunner American Wilds.

The joy of Spintires, such as it is, can pretty much be found in the struggle. When you’re grinding a massive truck up at hill through a muddy bog where forward movement can be measured in tiny increments, every centimeter that you push forward feels like a small victory in itself. Likewise, finding yourself stuck in a river might seem hopeless until you realize that you can use a winch mechanism to moor yourself to a nearby tree and pull yourself across – effectively making Spintires seem like a puzzle game of sorts in the process.

From a technical perspective, Spintires is surprisingly robust. Boasting a super smooth framerate and some fairly detailed environments, it’s clear that it’s in the mud-modelling where Saber Interactive have wrought their best work – as the mud deforms, churns and changes shape as all manner of mammoth vehicles tear their way through it. The vehicles too feel great to handle, boasting all the heft and power that one would expect from big vehicles that have been designed with overcoming nature’s most treacherous environments in mind.

That said, for endearing as I personally find Spintires idiosyncrasies to be, there are times where it can certainly feel like it’s being unfairly punishing. Spending nearly half an hour to slowly drive a massive truck to one location, hitch a trailer to it and then spend the next hour so wrestling with the mud to reverse park the thing in *exactly* the way that the challenge demands can be pad-chewingly frustrating and hardy the stuff of giddy fun.

Additionally, Spintires will never be confused for a game that gets the pulse pounding, so despite the array of ludicrously powerful vehicles on show, folks who are looking for something more accessibly frantic will find little of solace here.

Spintires: MudRunner American Wilds won’t be for everyone and that’s OK

If you’ve not guessed already from the sprawl of text that has preceded this closer – Spintires: MudRunner American Wilds is not for everyone. Despite that however, it’s refreshing to have a game like this that unashamedly knows what it is and makes precisely zero concessions to those who fail to grasp its unique premise.

There’s a real charm to being put in charge of a hulking vehicle, with just your map, compass, winch and driving skills at your disposal as you pit yourself against the forces of nature. Slow, occasionally frustrating but always satisfying in the long-term, if you want to try a PS4 driving title that does things very differently, then Spintires: MudRunner American Wilds is your huckleberry.

Developed by Saber Interactive and published by Focus Home Interactive, Spintires: MudRunner American Wilds is out now on PC, Xbox One and PS4. A Nintendo Switch release is set for November 28, 2018.

The ultimate collection of one of the most intriguing titles on the market - Spintires: Mudrunner American Wilds might infuriate and test the patience of many, but those who can push past such feelings will soon discover quite the uniquely satisfying endeavor.