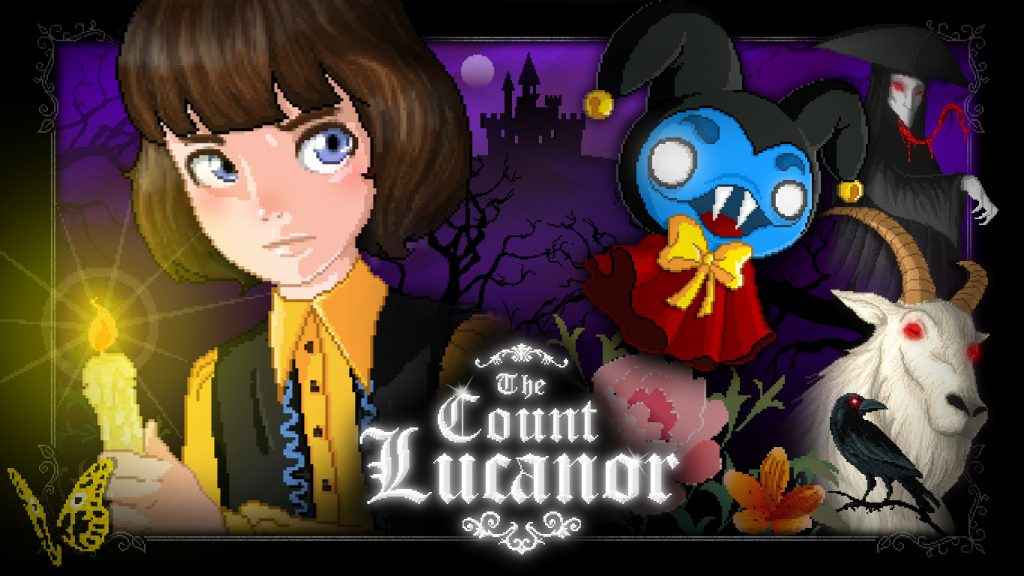 Back in March of 2016, indie developer Baroque Decay released their first major title, The Count Lucanor, on Steam. The survival horror pixel art game and its Bach-inspired chiptune soundtrack quickly garnered a fanbase and over 300 positive reviews, and rumors began to churn about a possible console port.

That port has finally hit the digital shelf, and PS4 players will be able to take on the role of a young, doe-eyed boy named Hans and experience a unique adventure they may have missed otherwise.

It is Hans’ tenth birthday, and he dreams of being a great adventurer and treasure hunter. He is a poor boy of humble beginnings whose father has gone off to war, and his mother can’t even afford a toy for him. Hans, oddly being too spoiled for a child of such meager origins, is having none of this, and is determined to leave and start his own adventure; he is a man now, after all.

From his journey through the woods, meeting an old woman and her pet pig, to his encounter with fellow treasure hunter, Giulia, his conversations with this eclectic cast of characters reveal a story of a haunting coming of age for young Hans.

It is up to the player to decide how Hans interacts with each and every character, whether he helps them out by giving them an item they ask for, deciding their fate, or ignoring their request completely.

These interactions are what truly give The Count Lucanor its charm and drive the story, and ultimately determine how the game progresses and which of the five endings will be available once players make it to the game’s revelatory climax, so you will have to choose carefully how you behave.

This is one of the most impressive features of The Count Lucanor and other indie games like it, as trying multiple playthroughs in different ways reveal a vast combination of paths to progress and conversations to be had. Some characters may not even be discovered on the first or second time through, depending on if Hans gives one of the other characters a certain item they ask for.

The dialogue, though well written, suffers a little in the English translation. Sometimes odd grammatical arrangements of phrases common in English may require a double or triple read-through, but overall nothing is ever lost or difficult to understand.

The game isn’t all talk and decision making, however. The meat of The Count Lucanor lies within the walls of the Count’s Castle Tenebre itself. Upon discovering the castle, Hans meets a mysterious blue kobold, who proposes a singular challenge to him. Guess his name, and Hans will be the new heir to the Count’s vast fortune.

Unbelieving of his luck, Hans eagerly accepts the challenge and players will then need to delve into the depths of the castle’s many rooms, solving puzzles, dodging fiery and spiky traps, and collecting the kobold’s name letters from a gold chest in each room upon solving (or surviving) the challenges within.

Traps aren’t the only horrors that will await players, as the Count’s servants roam the halls and rooms, eager to carry on their duties and dismember any would-be treasure hunters.

The Count Lucanor’s graphics are classic pixel art style, and it is extremely well done. Even the cutscenes are a beautiful mix of pixel art and anime. All items, people, and animals are immediately recognizable, and early on the fauna of the forest react to Hans’ approach and hide, adding to the immersive quality. After night falls, the horrifying scenes and setpieces are beautifully rendered on this bloody pixel canvas, elucidating much glee from me and I’m sure will from many other fans of the macabre.

As I mentioned earlier, the soundtrack of The Count Lucanor consists of chiptune remakes of composer Johann Sebastian Bach’s lesser known music. These serve as very bright but somber reminders of the setting, and work well to compliment the graphics, bringing players back to an era of 8-bit gaming. The ambient sound effects are much higher in quality, adding to the immersion and even aiding the player, as the enemies whispers become louder the closer you get to them. The only immersion breaking glitches I encountered were sometimes a song would cut out abruptly, or the fire traps were overwhelmingly loud all at once.

The Count Lucanor plays in a top-down view, and players move Hans around to interact with people, levers, and all manner of objects. The type of interaction is identified with an icon appearing over Han’s head, such as an “eye” for an observation, or a “hand” to interact or pick up an item.

In classic adventure game fashion, the crux of the design requires players to explore everywhere, more often than not picking up items to be used later upon backtracking to a previous location, and using the correct item to advance. Players can cycle through most of the items on screen that will require use in these context sensitive locations, or can open the menu and select from the inventory.

There is no limit to the inventory size, which is handy because players will want plenty of gold coins, candles, and various food items (which restore health or can be given to certain NPC’s), all of which are necessary to survive the night.

Gold coins serve as the currency for saving, similar to the typewriter ribbons from classic Resident Evil games. Players will have to drop a coin into the fountain of the gardens, making a deal with the Raven to save Hans’ soul from Death itself should he fall prey to a creature or trap. They are limited in quantity, so players will need to plan their saves carefully, as there is also a merchant in the gardens that has items for sale that may be necessary to progress the story (again depending on how you decide to play; there is more than one way to skin a kobold).

Candles are integral to Hans ability to traverse the castle. Most of the rooms are pitch black, and many times the only source of light will be from the candle Hans is carrying when it is selected from his inventory. Players can place a candle down anywhere they want, essentially becoming a separate stationary light source. They can be used to mark paths or illuminate a dark corner, which may contain a monster at a later time. They last the entire game once placed, but there are only a set amount in the castle, so it is important to pick carefully where they are placed for best effect. Some rooms do have sconces within, which can be lit and provide a brighter light than the candle without using one.

Though players are at a disadvantage in the dark, the servants roaming the halls are not, and can see Hans with or without the light if he enters their line of vision. Upon seeing him, they will attempt to pull Hans close to attack. There is no form of combat, so your only option is to run away or attempt to hide behind curtains or under a table, or escape the room entirely. Other enemy types, such as the angry carnivorous goats, chase down Hans to bite, so careful maneuvering on the player’s part can sometimes be used to dodge.

The AI of the servant enemies can be wonky though, as there are times you can enter their field of vision, and they keep walking away, or even walk right next to them and they never notice or attack. Sometimes upon entering the main hall, there will be two servants randomly in front of the door you need to enter next, and can make for a frustrating encounter.

The movement of Hans is basic, though at times I found myself stuck on the odd corner here and there. Perhaps most irritating was during times of dialogue, when I wanted to move after the dialogue box had closed, but my input wasn’t registered while it was open, and I was pulled in or damaged by an enemy. I even died on a fire trap once or twice as a dialogue box popped up while I was walking over an unlit grate.

With all this in mind, the most important feature of the game, the survival horror aspect, is well paced and the suspense of wandering the halls of Castle Tenebre is edge-of-your-seat terrifying goodness. The disturbing imagery and enemies pay homage well to other games in the genre, both old and new. Though admittedly this feeling will be lost eventually on the second playthrough (if you’re going for the multiple endings), the first time through garners enough surprises and challenges to keep players guessing (and terrified of) what hides behind the next door.

The first playthrough of The Count Lucanor will probably last about 5 hours, depending on how much you explore and how quickly you solve the puzzles. Subsequent playthroughs will end up much quicker, which is helpful due to one unfortunate topic that I need to address here.

As we all know ports can sometimes be difficult to publish due to various programming constraints and differences in platform architecture, especially for small teams and indie devs. This port of The Count Lucanor is no exception, and as of this writing the day one patch address most of these issues, however there are still frame rate drops that simply shouldn’t be present in a pixel art game, and more importantly at one point towards the end of the game, I had saved and the frame rate became choppy, which led to a crash and a corrupted save data. This meant I had to start over completely, as my last backup to the cloud was from a previous run entirely. This crash happened several more times, though I only lost the save data the first time.

I hope that a future update from Baroque Decay will fix any lingering issues, because The Count Lucanor is truly a beautiful game to experience, so I recommend it highly on the condition that you backup your save file regularly, at least until the next patch.

With a wonderful story to experience, memorable and unique characters to meet, a trap-laden, monster-infested castle to explore, and multiple endings to discover, The Count Lucanor delivers a satisfyingly scary adventure. Though there are still a few bugs to be squashed (most have been taken care of with a day one patch), the port handles fairly well and is definitely worth checking out for any puzzle and/or horror indie game fans.