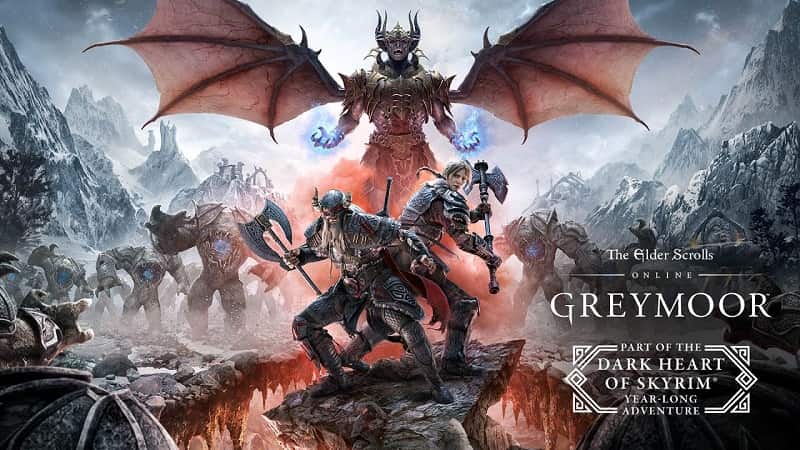 For a start, Greymoor represents what is easily the largest expansion to the flourishing MMORPG to date and within its vast, almost endless boundaries, Zenimax Online Studios have stuffed a grand adventure in there that is compelling to newcomers, veterans and lapsed players alike. However, there are elements of its design and technical performance that rankle deeply, but we’ll get to those in a bit.

A Nostalgia Stuffed, Massive Adventure That Establishes A New Jumping In Point For The Long Running MMORPG

There’s little denying the fact that returning to the frosty, snow-blotted peaks and valleys of Skyrim pushes all of the nostalgic buttons. Indeed, in what seems something of a cynical ploy to play on those nostalgic beats, Greymoor opens in a similar way to The Elder Scrolls V: Skyrim, as you sit in the back of a horse drawn cart, gently being pulled down a hill, idly chattering to other characters before, well, a whole heap of bad stuff happens.

Greymoor then, seemingly trades pretty heavily on the fact that despite being set some 1,000 years earlier, it pulls settings, some characters and lore from 2011’s greatest RPG with aplomb and in a manner not too dissimilar to what has already been done with the previously released Morrowind expansion. Though you could make the argument that the more recent Summerset and Elswyr expansions both look more attractive than Greymoor at turns, Skyrim as a setting still boasts a unique kind of beauty that makes it an opulent setting all the same.

Once we begin to emotionally separate ourselves from the Skyrim setting (an easier task if you’re one of the few who never indulged in the original 2011 release or in any other remasters or re-releases since), Greymoor begins to unfurl itself in earnest and the results, for the most part, are laudable. For a start new players are ably catered for with a new tutorial that does a far better job of signposting everything you need to know, all the while making the various menus easily accessible in the process.

Then there’s the presentation of the whole thing. While The Elder Scrolls Online has never been the prettiest or most polished looking game out there, there are places in Greymoor, like the ethereal looking, subterranean city of Blackreach that brings a haunting visual style to The Elder Scrolls Online that just hasn’t been seen before. Equally, beyond what you can see, Greymoor also sounds the part too, with a thunderously epic soundtrack that never fails to fire up for whatever lay around the next corner.

As to the new content that Greymoor introduces to The Elder Scrolls Online, much of it falls into the realm of the expected. The new ‘Harrowstorms’ realm event, in which players have to shutdown occult rituals which attempt to bring in all manner of demonic foes into the world, functions extremely similar to the ‘Dark Anchor’ realm events that The Elder Scrolls Online had at launch back in 2015. Elsewhere a new 12-player trial in the form of Kyne’s Aegis makes its debut, once again catering to groups of players who have the necessary skill and co-ordination to overcome its multiple difficulty settings in the pursuit of endgame level gear and equipment.

Likewise, Greymoor doesn’t skimp on the ancillary content either, as it brings half a dozen new world bosses to the fore, ten new world events, new settlements, public dungeons and much, much more besides. Simply put, if you’re looking to lose yourself for another hundred hours or more than The Elder Scrolls Online: Greymoor is more than up to the task.

In addition to all the usual cosmetic additions that one might expect from an Elder Scrolls Online expansion, such as new player housing, mounts, pets and so forth, one of Greymoor’s most endearing aspects is the resolutely Gothic approach it has taken in its re-imagining of Skyrim. Indeed, rather than just trotting out Skyrim again with little or no changes made to the landscape or setting, Greymoor instead goes full-tilt Gothic with all manner of werewolves, vampires, witches and other classic horror staples that all add up to make the game world feel much more intriguing than it otherwise would have.

Speaking of which, Greymoor places a much stronger focus on the vampire and werewolf skill trees now too, making the choice to become a creature of the night a properly viable one now that is sufficiently flanked by decent progression systems to make it worthwhile. Essentially now, being a werewolf or a vampire no longer feels like a gimmick or afterthought but instead as the sort of rewarding class that it should have been all along.

The other big new addition to the base game that Greymoor brings to the table is Antiquities, an activity that encompasses the two skill lines of Excavation and Scrying. Sounding good in theory – Excavation and Scrying allow you to unearth heaps of lore and fancy trinkets, the whole activity is actually something of a tedious slog in practice as you need to get ‘leads’ by killing special enemies from which you can then follow further clues and start doing Antiquities. The problem is that not only do these leads drop hugely infrequently, but it also causes certain areas in the game world to be heavily camped by players, which is far from ideal.

Then there are the small raft of bugs that Greymoor brings too. From character models getting stuck in the scenery to quests not triggering properly and a smattering of other technical hiccups, though the initial rush of bugs is something we should be used to now whenever a new expansion launches, it still doesn’t excuse the fact that there are still so many of them on day one.

Ultimately then, this somewhat reinforces the love/hate relationship with The Elder Scrolls Online that I and likely many folks will have right now. Greymoor does a lot stuff right – the familiar Skyrim setting being stepped in Gothic themes really works and so too do the werewolf and vampire classes finally now feel like worthwhile progression paths to seek out.

Equally, the mini avalanche of new quests, items and events all add up to make Greymoor feel like quite a muscular offering indeed, it’s just a shame that the new Antiquities feature needs a ton of work, while the seeming omnipresence of bugs both great and small continue to hamper what is otherwise a hugely enjoyable MMORPG effort.

The Elder Scrolls Online: Greymoor is out now on PlayStation 4.

Though The Elder Scrolls Online: Greymoor represents a good jumping in point for lapsed players and newcomers alike, it sticks a little too rigidly to its shopworn design tendencies to really excel, while elsewhere, a smattering of bugs threaten to take the sheen off what is otherwise a highly entertaining expansion to one of the better MMORPGs on the market.