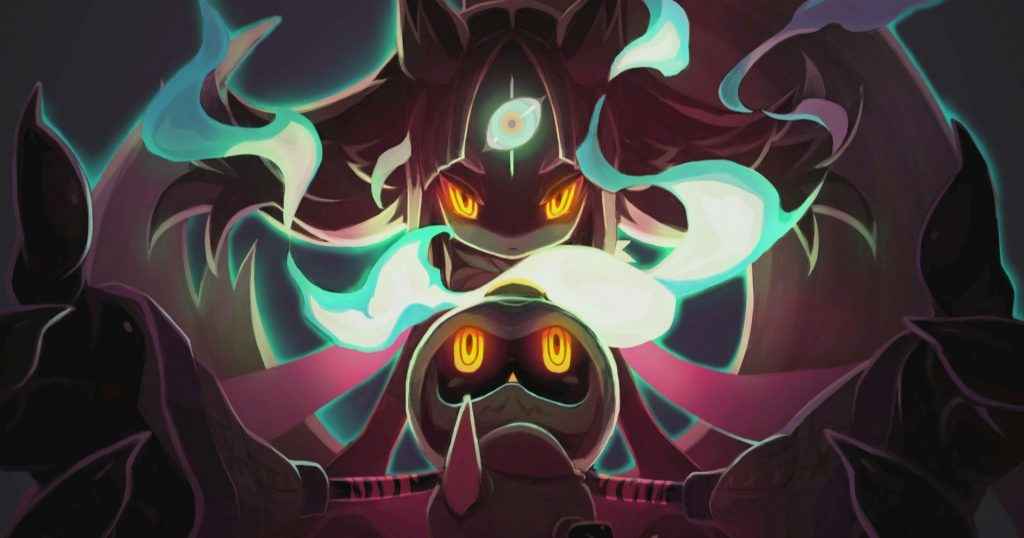 The Witch and the Hundred Knight 2 review code provided by the publisher.

This version fortunately saw many improvements and upgrades, including the fix of a game-breaking bug that a wider audience was able to enjoy it, even if only a little.

Thankfully, there was enough demand for a sequel that NIS America saw fit to give it to us, and in this The Witch and the Hundred Knight 2 review, I’ll let you know if this sequel was worth the wait, or if it surpasses the original in quality and style (hint: it was, and it does.) The Witch and the Brand New Story

The Witch and the Hundred Knight 2 puts you once again in the role of Hundred Knight, an adorable manania (witch’s familiar/servant) that is summoned during the witch Chelka’s awakening.

Witches are being created due to a mysterious disease spreading across the land known as Hexensyndrome. Once infected, young girls will begin to develop a Third Eye on their foreheads.

If this eye opens, the witch inside will fully awaken and begin to wreak havoc on the world.

The main character, Amalie, and her younger sister, Milm, were both cast out from their home village after Milm contracted the witch disease. With nowhere to go, Amalie joins the organization whose sole purpose is to wipe out the witch disease, Weisse Ritter, or WR for short.

During a surgery to help cure Milm of the witch disease, something goes horribly wrong, and the witch Chelka is awakened from within her and, as witches tend to do, she begins her master plan for world domination, with you, the Hundred Knight as her indentured serv- -ah, I mean gallant knight and trusted protector.

The story indeed starts out and stays strong. The majority is told through visual-novelesque animated cutscenes, and are indeed as fun as, if not more, to watch than the first game’s, due to added animation sequences that help bring the characters to life and display more personality than ever.

Small bits of arguably lackadaisical 3D animation also serve to supplement the story. They aren’t anything exciting and really serve no purpose, other than to show off the characters in all their bouncy, more-often-than-not voluptuous appearance. The true heart of this tale lies with Amalie, as we see her constantly torn between her duties as a WR Holy Valkyrie apprentice, which is to wipe out Hexensyndrome, and save her sister Milm, whom she would go to the ends of earth for (and indeed does).

Milm’s feelings for Amalie are the same, and this tale of sisterly love and sacrifice run at the core of the conflicts and politics of this story, all truly leading to something wholly worthwhile experiencing.

The writing and dialogue, as with the first game, are simply top-notch, especially with the strong and emotionally driven voice acting for all of the main storyline (which wasn’t the case in the first game).

Although there is still some macabre and often times perverse humor, it is not as prevalent as we were once treated to with Metallia from the first game, though Chelka is indeed merciless and provides some of the most hilarious dialogue and actions in the game. I don’t imagine anyone being turned off by her gallows humor this time around.

Worry not though. If you haven’t played the first game, you needn’t worry too much about spoilers, as on the whole, both games can be enjoyed separately from each other. The Witch and the Improved Mechanics

The Witch and the Hundred Knight 2 has also nailed down quite a few of the mechanics that held the first title and its re-release back.

Combat is still central to the game during your exploration, and retains the almost rock-paper-scissors style of dealing and receiving damage via a Slash-Blunt-Magic system. Most of the time you will be switching weapons to properly deal damage to enemies that are weak against one but not the other.

This was an admittedly irritating problem in the first game that was remedied well in the Revival Edition with the chance to assign three different loadouts you could quickly switch between. This system has been improved and augmented by combining it with the returning Facet system.

All your Facets are still there, but this time you will equip the Facets themselves with your different weapon loadouts, which allows you to pick just the right class for the right occasion. Facets still augment damage output and intake based on what weapons you combine with them and what is hitting you, making proper use of each one you equip, and proper timing and dodging is essential to victory. Gone is the stamina bar, which before would deplete while dashing or dodging, and this really aids in feeling like a badass instead of feeling like you are being punished for just playing the game.

Gigacalories are still important to pay attention to, but now simply exploring the map will not burn them away like a quickly moving brush fire. Executing actions and walking, dashing, or dodging will slowly drain them, but taking damage will drain them faster, as they are used to replenish health over time.

To restore Gigacalories, the Consume ability has returned, but is now called Depletura. Once you have hit the last attack in a standard five-hit combo, you can use the Let ability to dash toward a weakened enemy, kind of like a finishing move. Hundred Knight will tenderize them and eat their energy, restoring his Gigacalories in turn, with larger and tougher enemies restoring more than smaller and weaker enemies. The map system has changed slightly as well, and instead of visiting separate locations like the first one, the map is one long “open-world” map you can explore dungeon-crawler style. The story will lead you on in a pretty linear fashion, but as more areas become open, you can re-visit old areas or explore to find new areas that open up where ultra-powerful enemies reside. The Pillars make their return on the map as well, serving as warp points to fast travel around the map once you have made them bloom (by attacking them, of course).

The Hundred Knight now has skills he can perform with each different Facet, and in order to level the playing field you will most likely be using all of them.

As you level up, you will learn new Skills and then be able to assign them to four different button configurations. You will also gain Skill Points as you level up, which are used to upgrade your skills, giving them things like more damage, lower cool down time, or a wider AoE.

Tochkas (mini-manania that the Hundred Knight can summon) also return, and they too are assigned and leveled up the same way as skills are. The number of them available has been stripped down to only the best and most essential, and each will serve its purpose quite well if used properly in battle, such as for distracting enemies or laying down support fire. You can get new Tochkas and Facets from your hideout, just like the first game, by spending mana at your castle when they are available.

You can also use the Atelier at the castle to level up your weapons and armor. This is most imperative because enemies will become so tough that you will eventually find yourself forced to level up enough to win in a fight.

Like any alchemical upgrade system, items and mana that you collect from deceased enemies can be sacrificed, some providing more experience points than others. So pick a weapon you love (preferably a legendary level one) and upgrade it as much as you can. Having all high level legendary equipment on Hundred Knight provides a huge advantage in battle.

Speaking of items, the Stomach Stock once again makes its appearance. This is the only system that really hasn’t seen an upgrade, aside from consumed enemies no longer filling your stomach with garbage. Now, you gain more spaces in your stomach to hold items as you level up.

This will still quickly get filled, as pretty soon you will have more items dropped from enemies than you can fit in your stomach. It gets annoying quickly, and I always had to destroy less powerful items to make room for stronger or rarer ones, and then make frequent trips to Pillars to return to the castle to permanently gain them.

It’s even more annoying (or motivating, I honestly can’t tell anymore) when you are KO’d and you will randomly lose a small percentage of the items you haven’t yet banked (sometimes legendary ones, which can and will send you into a fit of rage not seen since I lost two million souls that one time to a Black Knight in Dark Souls…where was I)?

With smooth animations, and the feeling that all of these systems have been largely refined, combat is more fun and exhilarating than ever, but it is indeed not without its problems. The Witch and the Commitment

The Witch and the Hundred Knight 2 doesn’t really hit its stride until around the 20-25 hour mark.

This being said, the story is still absolutely worth grinding out the first quarter of the game, and as I mentioned before, the cutscenes are very rewarding for each stage you advance through and absolutely worth it

The tedium will show in the form of an almost Dynasty Warriors level of hack-and-slash gameplay. For every one powerful Nemesis enemy you face (which are enhanced regular enemies with more health and strength), you will slaughter droves and droves of weaklings as you explore long levels that, while beautiful and densely populated this time around, look very much the same after a few minutes in each.

Where the game truly excels is when it is at its most difficult. The beautiful moments when you are surrounded by 30 different enemies onscreen, each having a different weakness and immunity you need to exploit, using all your Skills, Facets, and Tochkas, dodging and switching on the fly, and then emerging victorious, are what makes the game shine, and you’ll never actually feel more like the Hundred Knight, Master of a Hundred Tactics, than at these times. I never encountered any odd glitches or general weirdness in my The Witch and the Hundred Knight 2 review, and any time I ever died was due to my own carelessness or, far more often, overconfidence and greed.

I can honestly say this is one of the more fun JRPG/Dungeon Crawler games I’ve played. While I’m sure I don’t need to convince fans of the first game to play this one, if you didn’t like the first one, don’t be afraid to give this installment a try, you just might not be disappointed.

The fate of Kevala is in your hands, brave knight.

With its cast of unique, adorable, and amazing characters, and a storyline sure to defrost even the coldest Garachi Ice Golem's heart, The Witch and the Hundred Knight 2 serves as proof that with the right upgrades and refinements to gameplay, no series is beyond saving when given the proper TLC it deserves.