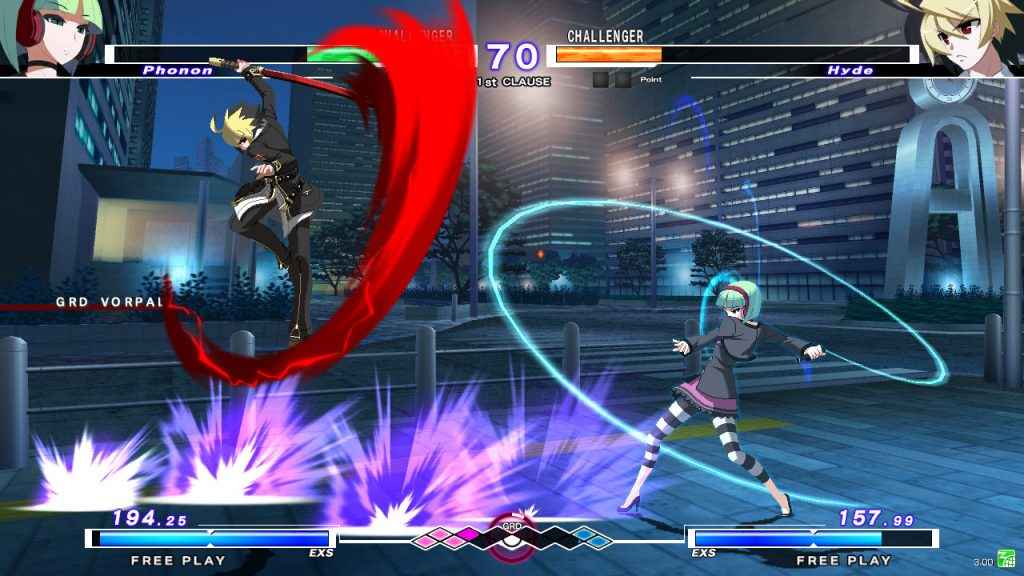 A port of the 2014 PS3 game, Under Night In-Birth Exe: Late [st] makes its way to PS4 with an improvement in graphics and frame-rate, and the result is a stunning anime fighting game that runs super smoothly on Sony’s latest console.


Arcade mode plays like a typical standard fighter arcade, with unique cutscenes for each of the playable characters as you play through several stages until you reach that character’s final boss – with each character having a different arc to play through.

Versus mode allows you to play against AI or against other players locally, and you have plenty of options to change features such as BGM, stage and how many rounds will be fought to decide the winner. This ‘Network’ mode allows you to set up private lobbies to play with friends or you can make them public to play online against random users. Under Night In-Birth Exe: Late [st] also has a frame rate counter allowing you to see how the network is affecting your latency so you have less reason to blame the game if you are suck too much. It also has a score attack mode which allows you to fight with as much skill as possible such as not taking damage or doing multi hit combos to gain higher point score. These scores can be saved in a ranked leaderboard and compared with other players or friends who own the game.

Time attack mode is missing in so many fighting games, so it’s a nice inclusion here. Allowing you to fight a certain amount of AI enemies until you run out of time, you need to try to win as many as possible and claim your place on the ranked leaderboard.

Survival mode is another solid addition. You have a health bar and must keep fighting until your health depletes. Certain things increase your health at the end of the round, but the amount is minimal as it would negate the whole point of this mode. Training and Tutorial mode are designed to allow you to master and practice the deep combat of the game, allowing you to practice before tackling the online player base. I would recommend jumping into this mode first as the game can be a bit scary to get used too with some of the characters being alot more complex in style then others.

Mission mode is an extension of the training and tutorial mode, giving you set combos to complete to unlock rewards and help you practice those combos. Customization allows you to change your online profile from icons, plates, titles and other such features. You unlock these by spending Ip. This currency can be earned from arcade mode, and other modes. Just by partaking in fights, you will earn plenty of this from playing the game. Though the selection of stuff available is quite overwhelming at first, just try to find avatars that you really like – I am personally a fan of the chibi icons! The biggest thing that makes Under Night In-Birth Exe: Late [st] different to every other fighter is the Chronicles mode which is a visual novel-based mode. It offers backstory to the game and is designed to be a prologue with 22 chapters. This is a nice unique feature that I personally haven't experienced in a fighter before. I really would love to see more fighting games give this much love and effort into the story, and at first I was skipping stuff thinking that a fight would happen soon I was shocked as the cutscenes kept going on though obviously they didn't have a huge budget as most of them are still images with some slight animation, would of been nice to have had some fully animated scenes but I guess that could be something we see in future games in the franchise.

Under Night In-Birth Exe: Late [st] has 20 playable characters with skills ranging from close quarters combat – with fast attacks like Akatsuki who uses lightning fists to combo the opponent in battle, – to slightly more ranged characters like Hyde, who uses a short sword during combo attacks. Other characters, such as Eltnum, have longer slower ranged attacks that can pull enemies close in. Certain characters seem to have a size advantage over others, including Merkava who can hit most of the screen from where he is standing with his incredible long arms and legs, but his attacks are slower which allows more time to block or dodge out the way of his attacks.

My favourite character is Chaos, he wields a simple book that allows him to summon a demon dog to help in combat, he can combo this with his teleport ability to keep the opponent chained. The buttons are the same as most fighters except ‘X ‘is charge your veil gauge; when this is full can press R2 if using default controls to unleash stronger super attacks then normal.Overall, there’s a great range of characters to suit every playstyle, and the action is fast, fluid and exciting

When I started playing Under Night In-Birth Exe: Late [st], I wasn't sure what I was getting myself into, but after playing several hours and having some incredible fun with mates online, I feel like this game deserves a spot as one of the best fighters this gen. With its in-depth storyline, fantastic character roster and sheer amount of fun game modes available, this is a fighter that’s well worth checking out.

With stylish combat, a ton of game modes and fun combat, UNDER NIGHT IN-BIRTH Exe:Late[st] is a blast, especially online with friends.