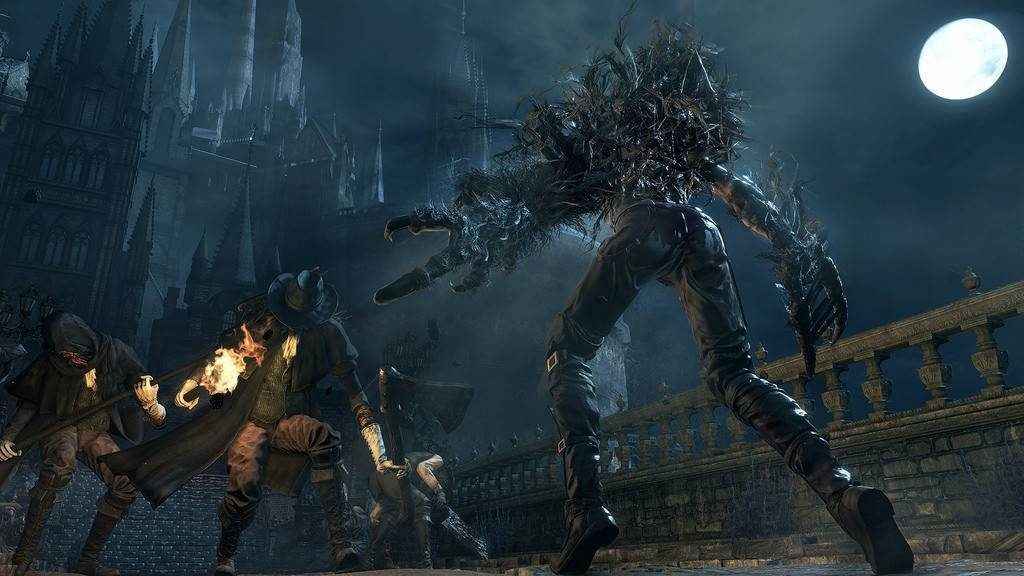 The following Bloodborne tips guide is ideal for new adventurers just starting out on their dangerous quest into Central Yharnam and its surrounding areas. As it’s now on PlayStation Plus, there’s likely a fresh influx of souls descending on Yharnam. Most of whom will need plenty of Bloodborne tips.

This is not a world for the faint of heart, so reading up on our Bloodborne tips can ease you in somewhat.

Follow these Bloodborne tips to ensure you get off to the best and safest possible start, and look out for our series of Bloodborne boss battle guides, and don’t forget to check out our Bloodborne review.

1. Farm Blood Echoes
Blood Echoes are the currency in Bloodborne. Each time an enemy dies you will earn Blood Echoes which can be spent on armour, weapons, repairs, items and upgrading your character. Early on you will benefit greatly from farming Blood Echoes. Simply, progress as far as you feel comfortable without taking on any major enemies and then go back to Hunter's Dream. When you head back to Central Yharnam, enemies will have reset in exactly the same positions, following exactly the same movement patterns. You can farm routes over and over again to rack up plenty of Blood Echoes quickly to buy your first set of gear.

2. Death isn't all that bad
Each time you die you will lose all the Blood Echoes that you accumulated. However, you can get them back by visiting that exact spot again. It's often worth going back to the area where you died if you lost your life when in the possession of a good amount of Blood Echoes. Be wary though; you have one chance to reach that point without dying to reclaim those lost Blood Echoes again. Hopefully, you learned something first time around to defeat the enemy that killed you and the fact that you've already trodden that path should make it easier to reach. The reward of heading back to reclaim Blood Echoes, accumulating even more along the way, is often worth the risk.

3. Watch for behavioural patterns
Each enemy not only has a set attack pattern, but also moves around the environment in exactly the same way. Monitor movement from a distance. Early on, for example, you'll see torch-wielding Hunters following the same route through the town and then re-tracing their steps. You can use this knowledge to avoid them or create an ambush by attacking from behind. Each time you encounter a new enemy, let them come toward you and then roll out of the way so you can see how they attack and then respond accordingly.

4. Get locked and loaded
Remember to lock onto enemies with R3. This will give you a greater chance of landing a true hit and causing the maximum amount of damage. Simply click of R3 again to remove the lock-on if you need to move more freely. You should always lock on to throw items such as Molotovs, otherwise they may not land where you want them to.

5. Isolate groups
Until you start to upgrade your character and purchase better weapons and armour, large groups of enemies can be tough to get past. Watch their movement closely and use pebbles to isolate the one at the back of the pack and then take him out. You can repeat this process to take enemies out one at a time. If a large group does happen to run at you, you can run away. Once you reach a certain point, enemies will often back off and go back to where they started. Or, you could simply throw a Molotov cocktail or Oil Urn into a group for some serious splash damage.

6. Switch it up
Remember to switch it up in combat. You carry two weapons (in our case an axe and a pistol). We found starting off a battle with a charged heavy attack and then switching to light attacks in quick succession worked well. Cause enemies to stagger with a shot of the pistol and then go in for the kill while they're reeling. You can also dodge roll backwards or to the sides, so watch they're attack patterns and stay out of the way when they attack.

When the doll comes to life, visit her to upgrade your stats

7. Don't feel you have to fight everything
Many enemies will only chase you for a certain amount of time or distance before they back off. In Bloodborne, you don't have to fight every creature you encounter. Simply run past them by using the Circle button and get to safe haven, or leg it!

8. Go with the glow
Look out for glowing objects. Interact with them to pick up items that will help you on the way. Read every single note that has been left by messengers from other worlds. Notes will often give you a hint at what lies ahead. We've found many secret passages and avoided many pitfalls by reading messages.

9. Smash everything
Bloodborne is full of destructible objects. Smash everything you see as you never know what might lie behind a set of boxes. By finding secret passages you'll discover shortcuts which will save you a lot of time and energy.

10. Check your weapons
Each time you head back to Hunter's Dream, check the state of your weapons. It could be that you're not inflicting the maximum amount of damage as they're in need for repair. Repair your weapons often and it won't cost you too much. Also, fortify your weapons as soon as possible. You'll need Blood Stone Shards to upgrade which you'll find by searching dead enemies.

11. Free bullets and stocking up on Blood Vials
Blood Vials are cheaper to buy than bullets. Try and keep stocked up on the maximum amount of Blood Vials possible before heading out into the town. Pressing up on your d-pad will give you five free bullets at the expense of some health, which you can always replenish with a Blood Vial. This tactic can be crucial.

12. Call for help
Use your Beckoning Bell when you need help to summon in other players. You'll first need to get an insight point to use the Beckoning Bell, which you'll get when you first encounter the Cleric Beast. If you can't beat him, you can then ring the bell to get help from someone else in the game world. Check out our boss guide on ‘How to Beat Cleric Beast’.

Can’t beat a boss? Call a mate for help with the Beckoning Bell

13. Learn from your mistakes
Our Bloodborne tips will only take you so far of course. You have to make mistakes in Bloodborne to progress. Learn from them and you'll get that little bit further each time you try. Be patient and observe when you need to. Keep using those Blood Echoes to upgrade your character's attributes and you'll feel yourself gaining in strength and confidence.

Hopefully these Bloodborne tips will see you master the streets of Yharnam. Good luck on the hunt!