Aside from triple-A games like Assassin’s Creed Origins and Monster Hunter World, EGX 2017 was a great place to meet up with some talented indie developers and check out some of the intriguing indie titles coming to PS4.

The EGX Rezzed zone was full of shining gaming gems just waiting to be found, and we discovered three fantastic brain busters that we can’t wait to play again.

While not restricted under the umbrella of ‘puzzle’ games, The Occupation, Qube 2, and Octahedron are all set to push the boundaries of the genre and put your squidgy grey matter to the test. 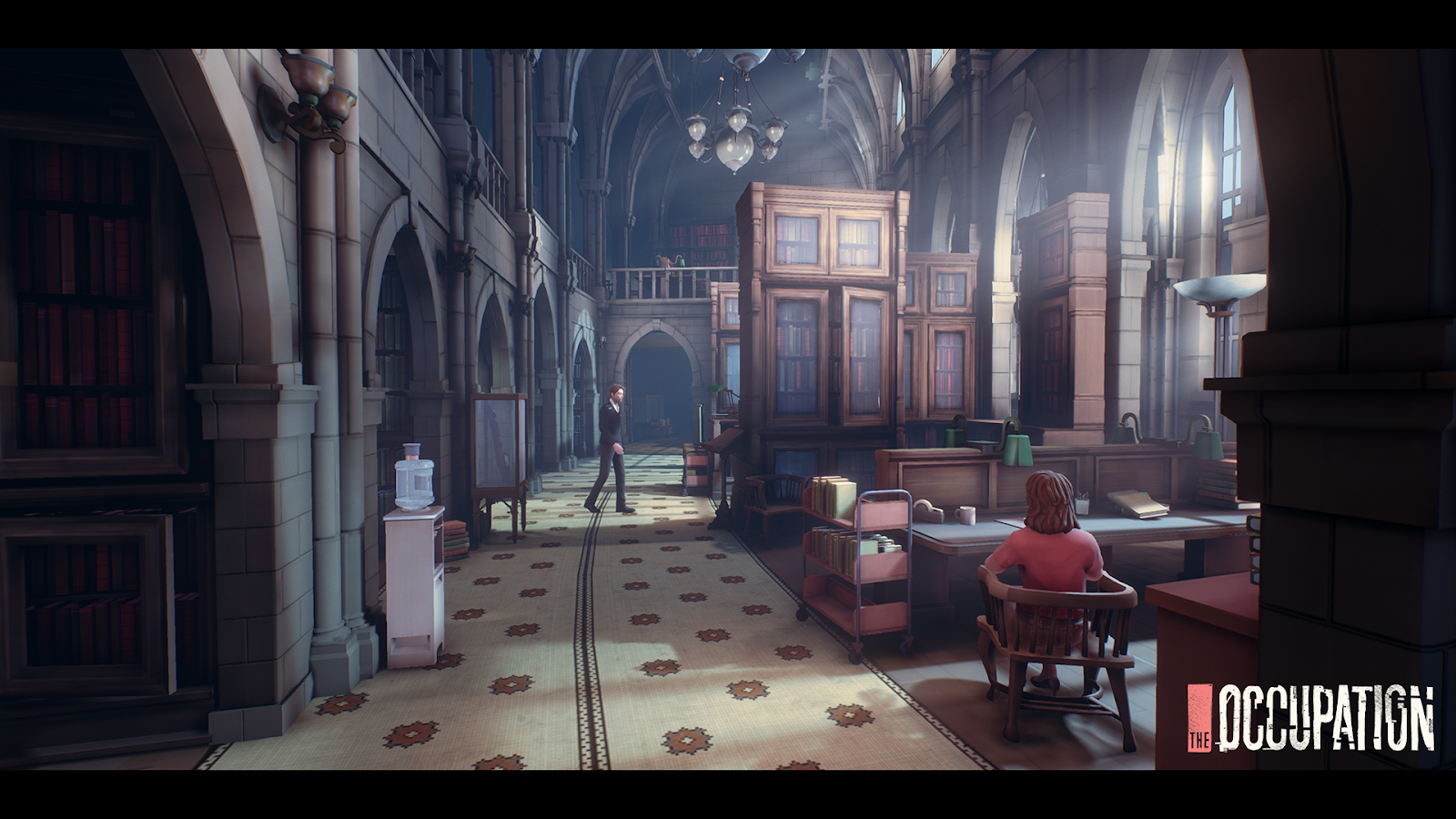 It’s 1987 in a fictional Manchester city called Turing. You become a journalist – ooh journalist-ception happening here! – and embark upon a piece of immersive, interactive fiction in which you have four real-time hours to affect the outcome of The Union Act. Set to be enacted following an explosive attack, this is proposed as a means to prevent and protect, but will have adverse effects on the population and could be used to further political agendas. In this politically driven first-person adventure, will you aim to prevent the passing of the act, or enable it going forward?

We were so struck by The Occupation that we have a juicy in-depth preview on the horizon, in which we talk to Pete Bottomley from White Paper Games and thoroughly explore the emergent gameplay we were presented with on the EGX floor!

Until then, sate your enthusiasm with the trailer for The Occupation!

As the demo begins and radio communication with ‘Emma’ pops up in the corner, I was taken aback. I stupidly thought that, somehow, the game knew I was there. The image in the top left of the screen even appeared to look like me for a moment…Then I remembered that Emma is actually a fellow survivor, who is also stranded somewhere on this cubic alien planet. Doy! Anywho – in Qube 2, you fill the glowing gloves of British archaeologist Amelia Cross, in a puzzle adventure that looks to challenge you psychologically and logically. Things are not quite as they appear on the surface in Qube 2: “Our narrative designer wrote this super crazy narrative that was borderline psychological horror,” Connor Stanley, 3D artist, explains enthusiastically, “we read the script and the reaction was like, holyyy shit.” Toxic Games have taken a huge leap forward with Qube 2 and have significantly built upon its award winning predecessor Qube; the first-person puzzle adventure game in which you manipulate cubes in the environment to complete a series of chambers. Qube 2 presents a fully realised, visually stunning 3D environment: “In the sequel we look at taking the player to more creative areas,” said Connor, “so it’s not all set inside what looks like a test chamber or blank room.” In Qube 2 you get to venture outside of the cubic walls and into unique open spaces – like the one above.

Connor explained the importance of maintaining a minimalistic approach alongside environmental creativity, to keep the focus on the puzzle mechanics at its core: “The whole game flow is like an onion, you take the layers down, and it progressively gets crazier and more creative and even more crazy!” Connor told us, “so designing the art along with the narrative was huge. We aim to keep things very minimalistic, if the room is super busy you can’t break down the puzzles. The essential mechanics are pretty straightforward, but it’s about how you think to solve them.”

On playing, it’s clear that Qube 2 has been meticulously crafted and while it’s a bigger, multi-layered onion than Qube, the team haven’t chucked all these elements into a blender arbitrarily. As I played through a mix of the early stages, nothing felt out of place and the atmosphere was suitably chilling, yet strikingly beautiful at the same time.

Of course the Portal comparisons have been flying in, as they do: “Portal is like the kingpin of the puzzle platform,” said Connor, “anything that reminds people of Portal is only ever a compliment because you’re being compared to one of the best puzzle games on the market!”

Seeking a way to fill that Portal hole? Qube 2 looks to be the game for you – heck it may even surpass Portal in your eyes, you’ll just have to find out and see. 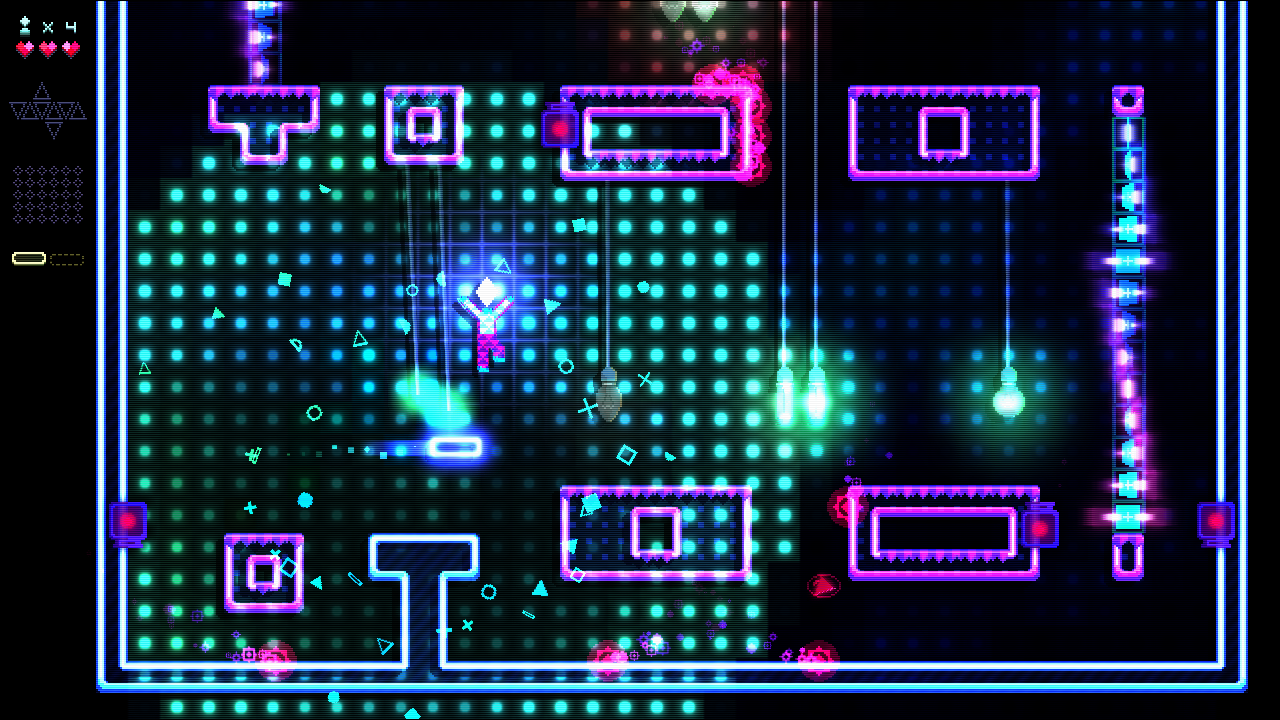 Shining like a beacon from the Square Enix Collective, it was time to go neo-retro with psychedelic vertical precision 2D platformer, Octahedron. As you aim to escape Veetragoul, you intuitively create platforms beneath you to ascend and surf through gaming’s most mesmerising club scene. “Music has been my life,” said Marco Guardia, the one-man indie developer at Demimonde, “stylistically, the whole aesthetic came from my background in music and sound engineering. By integrating the rhythm components, Octahedron grew from the core idea of a platformer about making platforms into something bigger over time.”

Playing a handful of the 50 stages that will feature in Octahedron, all of our surroundings faded away along with any care or concept of time. With no tutorials, Octahedron is entirely instinctive. The game seeks to draw you in with light, pliant, rhythm based mechanics and its slick 60fps neon-pumpin’ aesthetic. “My main gripe with rhythm games has always been that you have to strictly follow the rhythm continuously, and from there you can’t really move or explore on your own,” Marco explained, “that’s something I wanted to avoid; this is very much a free-form platformer.”

Octahedron features four tracks from Chipzel, who recently remixed the Crypt of the Necrodancer soundtrack, contributions from House and Trance producer Andre Sobota, and Monomirror.

Check out the trailer for Octahedron, and prepare to boogie on down!