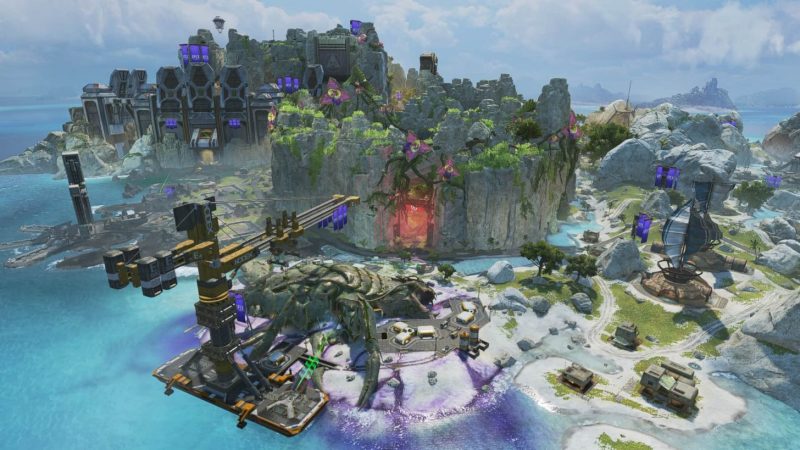 Apex Legends is just coming off one of its best season’s yet in Season 12, and Respawn is looking to carry that momentum into Season 13: Saviors, which begins on May 10, 2022.

We’ve already gotten a couple of trailers, introducing Newcastle, but we just got our first look at some gameplay with the new legend in action.

The trailer showcases Newcastle’s passive ability to grab downed teammates and protect them, his tactical shield that can be thrown up and aimed anywhere, plus it’ll send Mad Maggie’s wrecking ball right back at her.

It also of course showed off his ultimate shield barrage that can be smashed down to give your teammates instant cover.

Besides watching Newcastle in action, this trailer also gave us a chance to spy some things coming in the new season.

We saw some of the skins that’ll come from this season’s battle pass, and got a great look at the new area, Downed Beast.

As legends are bound to do, they’ve made a battleground out of the giant monster that would have otherwise decimated Storm Point, and you’ll be able to fight around, on top, and inside the massive corpse on the beach.

Another new addition to this season are IMC Armories, which can reward players with loot that will enhance the weapons they’re already using, by taking out as many Spectres as you can in 60 seconds.

Thankfully you’ll be locked into the armories whenever you do enter them, so another team can’t come in and third party you while trying to get some good loot.

Along with these big changes, there are changes happening on a smaller scale that’ll effect the gameplay meta in a big way.

Firstly, the R-301 Carbine won’t be ground loot in the new season – you’ll have to craft it in a replicator, and the same goes for the Rampage.

This means that the Flatline and the Longbow are out of the replicators, and back on the ground.

Putting the R-301 and the Rampage into replicators will definitely shake the game up, as both guns are hugely popular amongst players.

On a less meta-changing note, Respawn has brought some changes and adjustments to the prowlers and spiders that inhabit Storm Point.

The developer says the new season includes a “fresh take on the combat experience” when fighting prowlers in a newly added nest.

It’ll be interesting to see what other changes get revealed, as we draw closer to Season 13.