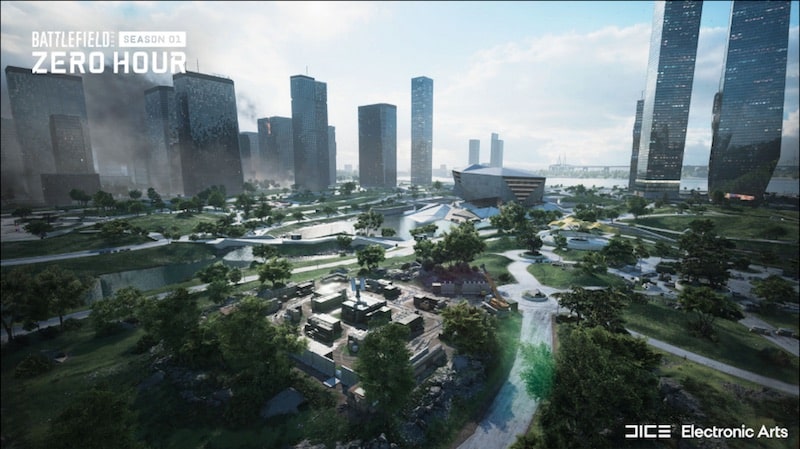 DICE has unleashed the Battlefield 2042 update 1.2 patch notes for your viewing pleasure, which comes with a wealth of improvements including a revamped Kaleidoscope, improvements to controller aim assist, and more.

Earlier this year we had an open discussion with you on map design via our Core Feedback – Maps initiative. Through your feedback, we identified several focus areas for our launch maps where our quality standards could be improved through Cover, Intensity, Line of Sight, Pathing and Traversal changes. As a result, we have been reworking our launch maps to ensure their gameplay is updated to these revised standards of quality.

Reworking maps takes time, and Kaleidoscope is the first map for which we have completed this rework. You can play the improved version in this game update.

We have revised the playspace to add more cover, creating new flag positions, and improved the flow across the whole map.

Cover has been added not only with the placement of new assets, but also in the raising of terrain to help break sightlines and let infantry move more purposefully around the map. Most importantly, these new assets bring more tactical destruction which help to ensure that the map evolves throughout the duration of each round, and provide both Attackers and Defenders with new options when playing in key areas.

We have also introduced new areas onto the map, by adding a Forward Operating Base into the park, with a second command post added close to the Tower. The Data Center has similarly received multiple passes from the teams to help ensure that there are more cover points, and new war torn looks to certain areas that help make the map more faithful to 2042’s setting.

We hope you will enjoy the new gameplay on this map, and we are looking forward to your feedback on how this updated version plays once you have tried it out.

As a reminder, Renewal is the next map we are reworking. That work is still ongoing, and the revised version will be available for play during Season 2.

In this update, we are revising our art direction to ensure Specialists meet your Style and Tone expectations for our world of 2042. You will notice updated Specialist character models to better reflect the intense situations they have experienced.

Here are several examples of those updated models. We would love to hear your thoughts on the new Specialist looks once you have seen them in-game.

Another area of feedback we have heard from you is being able to view your in-game performance and stats. This feature will be in your hands in Update 1.2 through the introduction of the Player Profile.

Your Profile shows your current in-game progress and your performance stats since launch. View information such as your current Rank, XP required towards the next Rank and the associated unlocks, your top Masteries and the unlocks you are next closest to completing.

While on the Statistics screen, you can check out information such as your K/D Ratio, kills, deaths, assists, revives, accuracy, shots fired and much more.

We are excited for you to discover how you have been performing once the Player Profile is in your hands. And of course, we are looking forward to seeing those impressive K/D ratio screenshots coming our way.

We felt that Paik’s EMG-X Scanner was not consistently worth using as an offensive tool as it caused her to become spotted, and thus vulnerable. We therefore removed this self-spotting effect, and slightly increased the spot duration of scanned enemies to make the Scanner more reliable for use.

We felt the offensive capabilities from the MV-38 Condor and Mi-240 Super Hind against infantry were still too strong. We are adjusting their 50mm Cannon to help further limit their impact on infantry, and to put more focus on these helicopters being intended as a means of transport.

We are adjusting the EBAA WILDCAT’s anti-air capabilities to ensure these weapons are more effective in their intended use of dealing with air vehicles.

We felt the Stealth Helicopter 30mm Cannon Pods were too powerful against infantry because they could be fired for extended periods of time and leaving little opportunity for infantry to retaliate. We have therefore increased the overheat speed for these Cannons to limit their impact on infantry.