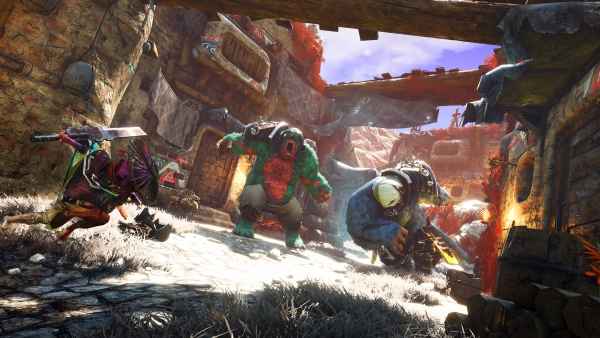 A new Biomutant trailer as well as over 30-minutes of gameplay footage were exhibited at GamesCom 2018 earlier today, giving us our most detailed look at Experiment 101’s upcoming post-apocalyptic, kung fu fable to date.

With highlights including a deeper look at the game’s character creator, versatile combat mechanics, and extraordinarily varied monster designs.

Before we get onto the gameplay, however, it’s worth noting the new Biomutant trailer provides a decent overview of everything covered in the other two videos. Alongside a few, tantalising glimpses of combat and the world itself, the trailer does an excellent job of conveying the game’s seemingly light-hearted and whimsical tone.

For example, in the first 35-seconds alone we see the furry protagonist darting rather clumsily across a precariously-placed high wire, dressed in some rather unique attire; rolling down a hillside in a ball of viscous, transparent liquid that would appear to be one of his/her special abilities; and meeting inventor the fantastically named Whiz Tinkertonker.

All while the narrator updates us on the protagonist’s thoughts and feelings in a suitably charming manner.

That being said, the gameplay footage makes it abundantly clear that Biomutant isn’t all sweetness and light.

Despite the colourful damage indicators, combat looks deep and frenetic. Demanding a high level of skill from its players who, over the course of the adventure, will have to deal with a startling abundance and variety of enemies. Including a handful of hulking, rocket-wielding behemoths (see 6:20 in the Heat demo).

There seems to be an impressive array of locations too. Mountains, desolate wastes, grasslands; there’s even an underwater sequence or two in the newly-published videos, along with a sojourn in the digestive system of a huge beast.

All of which is to say, Biomutant looks set fair to give us one of the most interesting open worlds in a long time.

Sadly, Biomutant hasn’t been given a firm release date as of yet. But we’ll be sure to update you as soon as that changes.