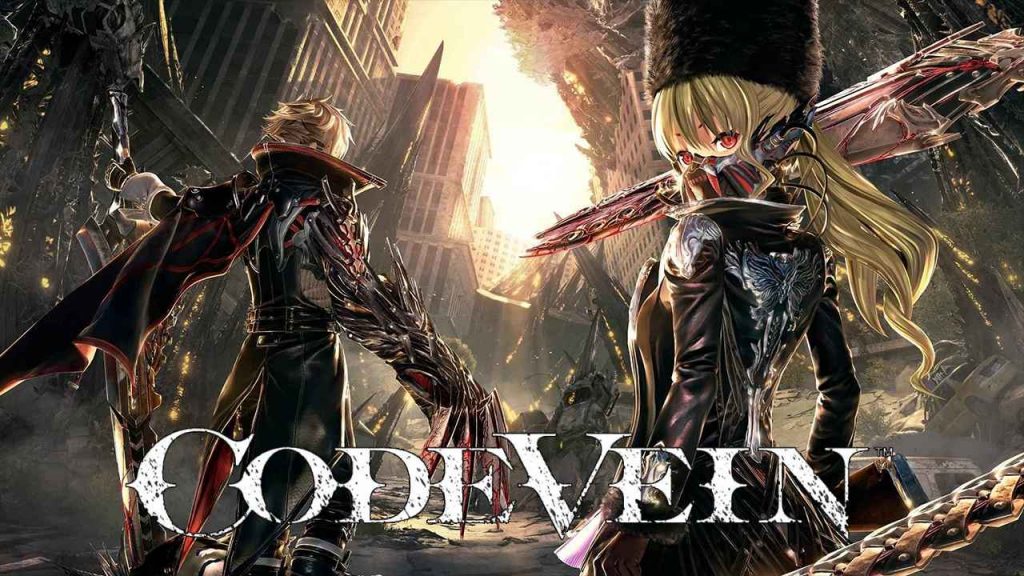 Since its delay ten months ago, we have heard barely anything about Code Vein, Bandai Namco’s latest title that attempts to fuse Souls-like gameplay with vampires and an anime art style.

But, Code Vein is back and I got to play it for two hours a couple of weeks ago. During those two hours, the world and characters stood out as my favorite aspect, as well as the most interesting part of the game. But, as I was playing I felt that something was off about the gameplay. It didn’t feel right as I was slashing down enemies with my sword and I think I have nailed down why that is.

My time was spent playing the opening of the game, which showcases the contorted and destroyed cityscape we have seen before. The game opens with my character waking up, unable to remember anything. Greeted by a character only known to me as the ‘Girl In White’, she takes me to a spring that produces Blood Beads, a way to satiate the thirst for blood that the Revenant vampires of Code Vein have.

Unfortunately, that spring and many like it are going dry and everyone is hunting for Blood Beads. Suddenly, she takes a bite out of my hand and some of my character’s blood falls onto the spring causing it to grow Blood Beads. The Girl in White then ominously states “it is you.”

That opening is quite different from other souls-like games. It is guided and the first ten minutes of the game are almost entirely cutscenes. You are given an introduction into the world of Code Vein, rather than being thrown into it and expected to accept the fact that you have no idea what is going on.

To some degree, you still don’t know what is going on in Code Vein, such as who are the Revenants that capture me right after my blood rejuvenates the spring, for example. Ultimately, I was a big fan of this opening and everything about the world being shown to me was grabbing me. I wanted to know who the Girl in White was? Why are the springs going dry? What happened to the world that caused all the buildings to become ramshackled?

Later on, the world only gets more interesting. After beating Oliver, the boss of this opening area, I pick up a vestige left behind from him and my character’s conscience gets pulled into an area where I can walk around and look at the memories of Oliver. Here I learn that he turned into a mad blood-crazed murderer who would do anything in order to acquire some more Blood Beads.

The idea of getting a clear backstory to the bosses I face and learning up-front why they are the way they are excites me as the game is providing me with all the information I need. I don’t have to resort to Youtube or a Wiki article to learn the lore behind the boss that is only cryptically revealed in a few item descriptions.

The world was what grabbed me throughout my demo and paired with the haunting mix of orchestral music and synthesized melodies. All in all, I was getting a foreboding and ominous glance at Code Vein’s vampire-infested land that I can’t wait to explore more.

When it comes to the gameplay of Code Vein, the first thing that hit me was just how many parallels I could draw between it and Dark Souls. Your character has a bunch of statistics, such as various defense values, resistances to various elements, HP, stamina, and different scaling rates for Magic and heavy and light weapons. You can rest at a Mistle, as well as level up those statistics. There are also a limited supply of healing items – I could go on at length as to the similarities with FROM Software’s opus.

If you are looking for something that is similar to what Dark Souls offered, now that FromSoftware has moved onto Sekiro: Shadows Die Twice, then Code Vein is your game. It takes the micro-managing and build-creation from that series and meshes it with a suite of Gifts (Abilities) that are offered by Blood Codes, allowing you to further expand on how you can fight, beyond just using different weapons like a sword or a hammer.

Blood Codes act as classes or specializations, making drastic changes to your statistics and capabilities during combat. For example, I found the Berserker Code after beating Oliver. This code was geared towards heavy, weapon-based attacks. As a result, my health, defense, and stamina were buffed, but my Ichor Stock, which allows me to use abilities, was cut by two thirds. This change meant that I couldn’t use my Gifts very often and I had to focus on a weapons build.

Each Code offers a variety of Gifts to use during combat. These can range from simple projectiles to buffs for teammates and strong close range special attacks for your weapon. All of these Codes, as well as the different weapons, give you a lot of different ways to play Code Vein. However, doing so didn’t bring me much joy in my demo.

The combat did not feel tight and polished enough to compliment the difficulty of the game and timing needed to take down the foes that stand in your way. My first big issue is that the camera was far too close to my character. This made the game claustrophobic and meant that I couldn’t see the attacks enemies were performing sometimes.

Even if the enemy I was fighting was in front of me and I was a few steps away from them, their weapon would either be out of my view or I had to contort my camera to an uncomfortable angle to see the attack coming. But, upon dodging out of the way I would have to do all that again to stand any chance of doing damage – though this is only a problem for the larger enemies. The flip-side of course, is that it is ultimately unfair and combat simply doesn’t work when fighting these enemies. This part of the game really needs some work as I encountered this issue with every single one of the larger enemies I faced in the demo.

My second big issue is that the stamina meter was far too punishing. I could only get two-to-three hits in before having to back-up and wait for it to regenerate and then do that over and over again. It felt less like I was fighting the enemy and more like I was looking at the attacks it performs for my own pleasure.

Another key issue I found with combat is that some of the close-range sword Gifts are absolutely worthless. During the latter half of my demo, I equipped a Gift that allowed me to teleport a short distance and perform a few slashes with my sword. The problem with this was that the Gift took so long to perform and finish that even if I attacked right after an enemy did I would still get caught in their next attack, taking damage and being punished for using an item in my toolset.

I didn’t enjoy playing Code Vein solo or with an AI partner supporting me. The latter alleviated the issues I mentioned a little; however, they were still present. Playing solo was just a frustrating and messy experience. The game didn’t have the same enjoyable toughness found in Dark Souls and other titles, which is needed for a game of this ilk.

Hopefully, these issues can be resolved. There is nothing inherently bad about the gameplay and I actually found using a combination of weapons and long-range Gifts enjoyable. However, there are important features such as the camera, the amount of stamina you have, and how long Gifts take to perform that still need to be fine-tuned for a game as fast and tough as Code Vein is.

The world the team behind Code Vein have created is an intriguing backdrop that shows a lot of originality and inventive concepts, such as giving us a window into the memories of the bosses we face and learning about them, developing them, rather than simply seeing them as the enemy.

It is a shame that I had such a bad experience with the combat in that world. I hope the frustrations I had are ironed out as Code Vein is a world waiting to be explored and learned about. But, at this point in time, doing so comes with a messy and unpolished combat system.