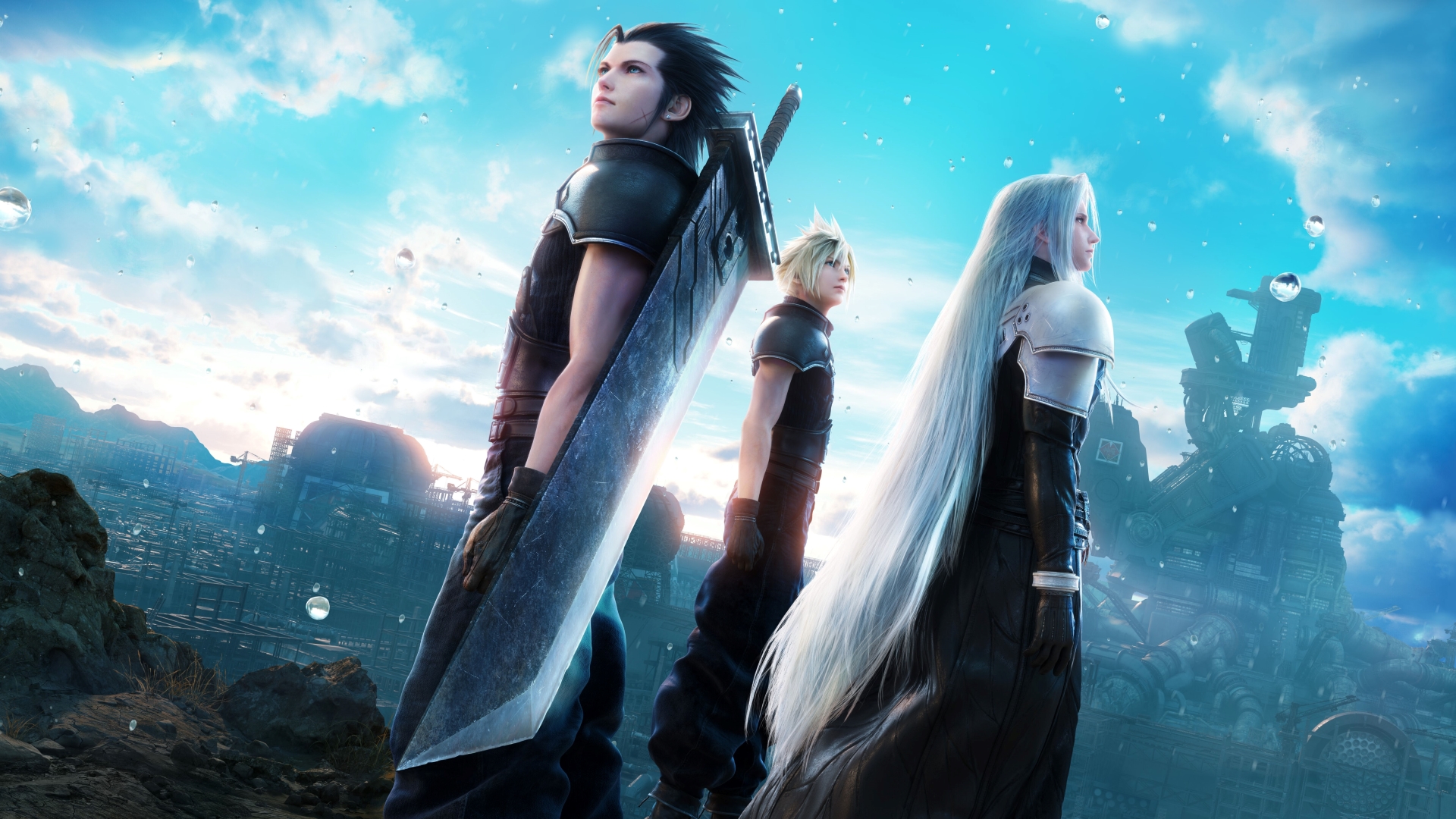 In 2020, in the midst of the early days of the pandemic, Square Enix launched the long-awaited and highly anticipated Final Fantasy VII Remake. It was released to widespread praise from fans and critics alike, and brought about a resurgence of interest in the FFVII series. Thus there isn’t a much better time than now to remaster Crisis Core: Final Fantasy VII, a PlayStation Portable game from 2008.

Crisis Core: Final Fantasy VII Reunion was playable at Square Enix’s Tokyo Game Show 2022 booth, and after my hands-on time with the remaster, I’m looking forward even more to its release.

Crisis Core is an action-RPG taking place seven years before the story of the original Final Fantasy VII. The protagonist is a SOLDIER named Zack Fair who eventually meets and becomes Cloud’s best friend. Along his adventure, Zack also meets various well-known characters from FFVII.That’s actually how my hands-on demo began, with Zack meeting the spirited Yuffie Kisaragi.

Since it’s much earlier in the timeline, Yuffie was not a full-on ninja yet and instead was an extra spunky nine-year-old kid in Wutai. After some humorous banter between the two (like Yuffie declaring herself “Wutai’s Greatest Warrior”), Zack was on his way and my actual playtime began. 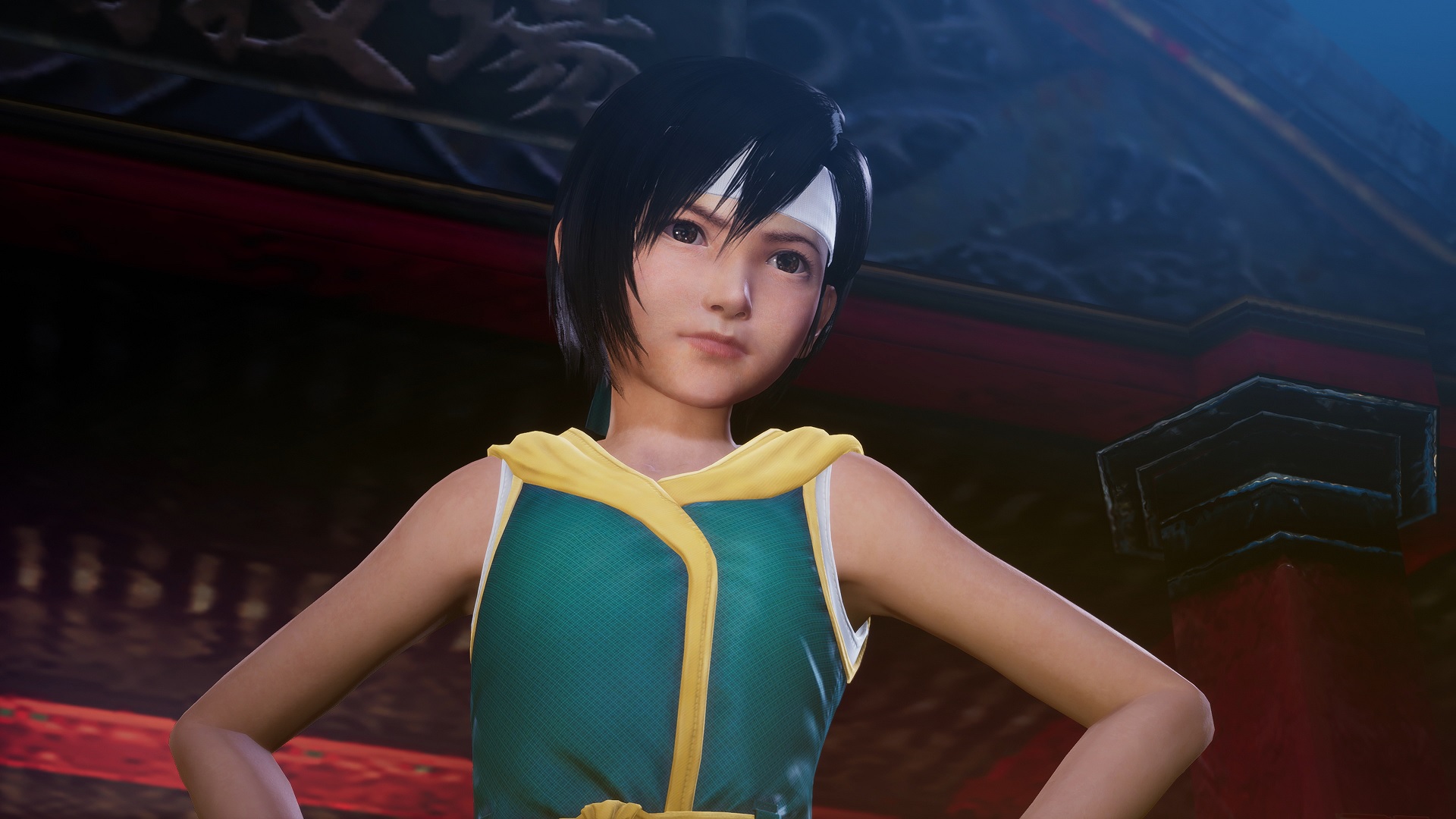 Soon, I found myself in battles against enemy creatures and had my first taste of combat. That’s when the real fun began.

Battle controls have been configured to be extremely similar to FFVII Remake, as well as the menus and the user interface as a whole. For those of you who played FFVII Remake, it should take you no time to get used to fighting in Crisis Core Reunion. Your left analog stick controls Zach’s movement while the right stick moves the camera (a very nice addition, since the PSP had no right analog stick or nub).

As for the face buttons, the square button is attack, the cross button is for dodge moves, circle to use the currently equipped item, and triangle to activate a Limit Break special attack. Pressing the L1 left shoulder bumper plus one of the face buttons activates magic attacks like Fire or Blizzard.

Holding the R1 right bumper allows you to guard while the R2 right trigger is for choosing the currently equipped weapon. For quick and convenient healing, potions can be used simply by tapping the down direction on the D-pad. It’s all pretty intuitive, so I was able to quickly get used to the layout with ease. 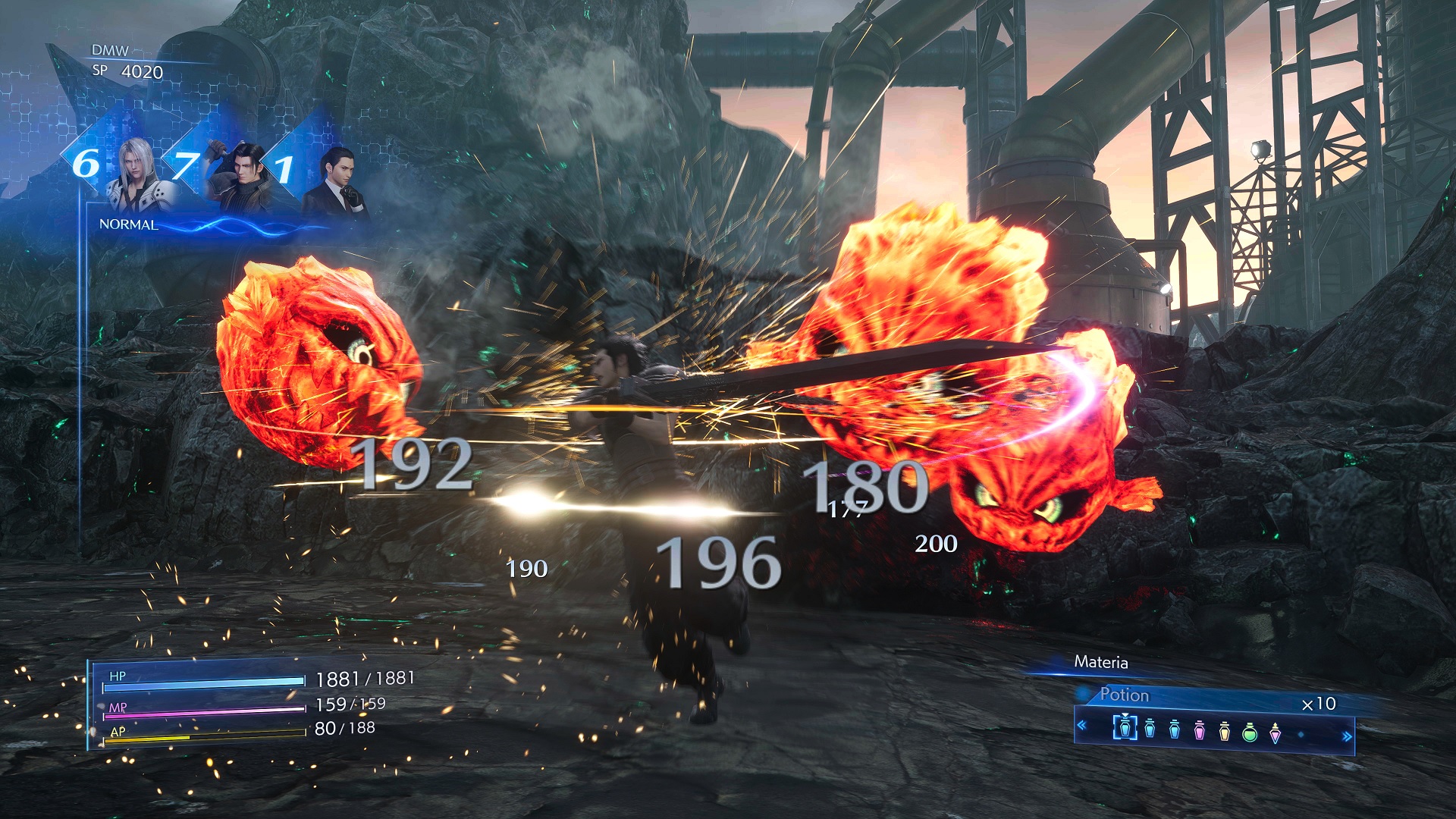 Combat was fast and responsive – it simply felt great overall, especially after playing Forspoken just before. Dealing damaging combos and timing dodges to roll away from enemy strikes was a total breeze.

Limit Break special attacks and Summons trigger cutscenes filled with the kind of powerful imagery as you would expect. Luckily, you can skip those sequences if you’ve seen any one of those too many times.

One of the unique elements in Crisis Core’s battles is the Digital Mind Wave. The DMV shows up as a constant slot machine in the top left corner of the screen. Depending on the slot results, Zack can receive things to help him fight. Winning slots payouts can be buffs or even special attacks, as the DMV is also Crisis Core’s Limit Break system.

Lastly, the DMV slots can sometimes set off flashbacks, to further give backstory and context to the characters and plot. It’s a neat little system that doesn’t break the game, and I found that it adds a fun element of luck to battles.

This wouldn’t be a proper peek at a remaster if I didn’t discuss the new graphics and audio upgrades. With the original Crisis Core being on the PSP, there was plenty of room for improvement for Reunion to fill. And fill it Square Enix did.

Visuals are of course the most immediately noticed and largest improvement with Crisis Core Reunion. The models for characters and background environments received new, overhauled versions. They didn’t look quite current-gen quality, but were around the graphical level of PS3 or early PS4, while looking sharp as it rendered in 4K on the PS5. 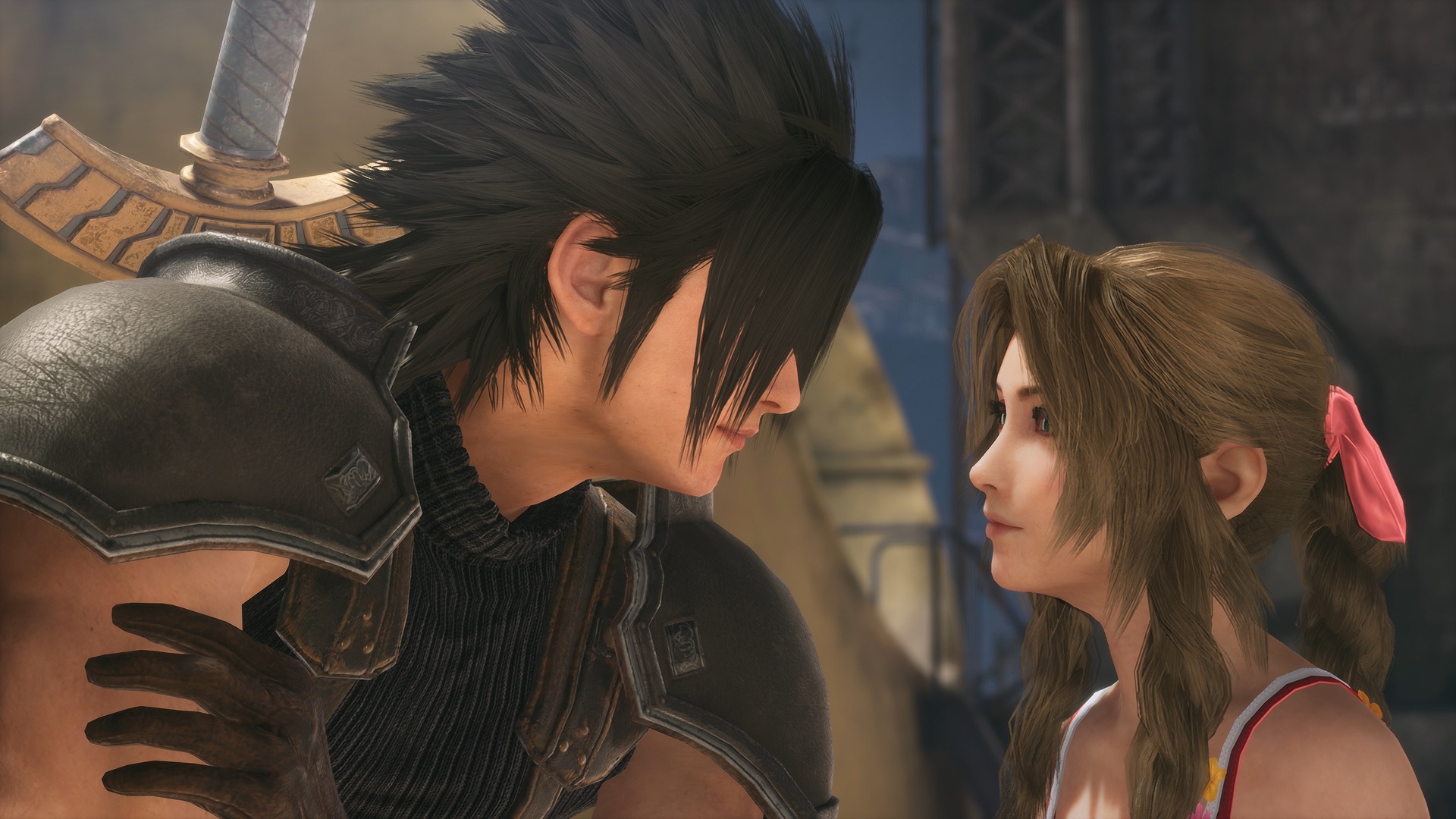 Characters in particular have appearances closer to what was seen in FFVII Remake, yet they do still have a tinge of the more Kingdom Hearts/anime-esque look of the original Crisis Core. It seems to come from the new character model designs retaining a bit of that style along with less “realistic” lighting and more limited animations compared to FFVII Remake.

Many combat and other gameplay animations are new and are much better for making the gameplay feel smoother and more engaging to look at and play. Meanwhile, the cutscene animations appear virtually unchanged from the PSP original. As a result, characters in Reunion still have stiff body movements and limited facial expressions during cutscenes.

Audio on the other hand doesn’t seem to be one area Square Enix took shortcuts with. With the remaster, dialogue is fully voiced, with a number of the English actors from FFVII Remake reprising their roles for continuity.

Likewise, the original’s composer Takeharu Ishimoto returned to make new arrangements of the songs from the original Crisis Core and compose completely new background music, too. During my playtime, Reunion sounded like a modern game from the voice acting, music, and sound effects. No real complaints in the audio department. 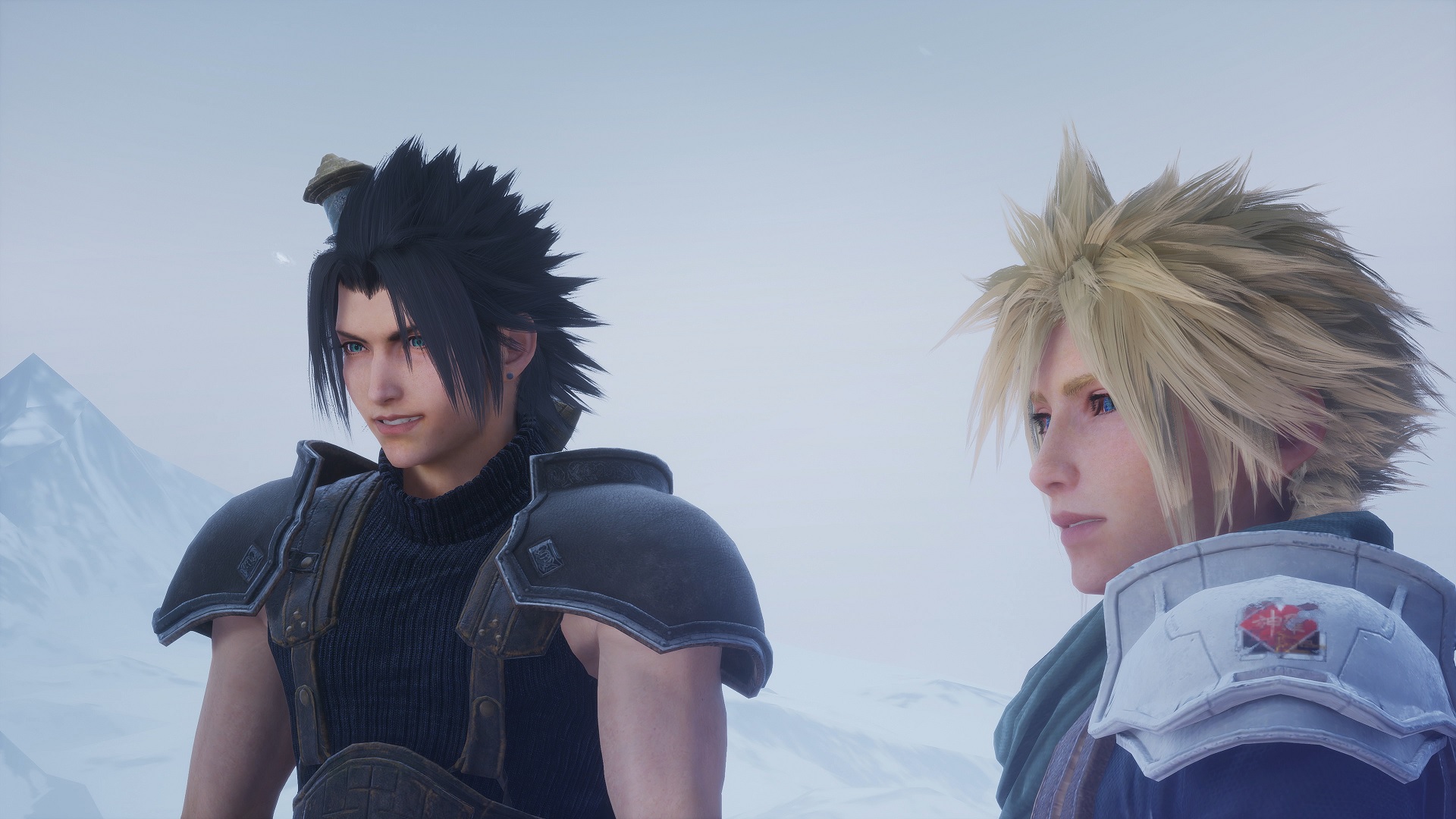 From my demo experience, Crisis Core: Final Fantasy VII Reunion is shaping to be the definitive way for fans new and old alike to go on this fan-favorite prequel adventure. It updates the visuals, audio, and gameplay to bring it to more modern standards.

Furthermore, Reunion looks set to offer a much more accessible way to experience Crisis Core. I came away from my demo more interested in the remaster than I was before and can’t wait to play more.