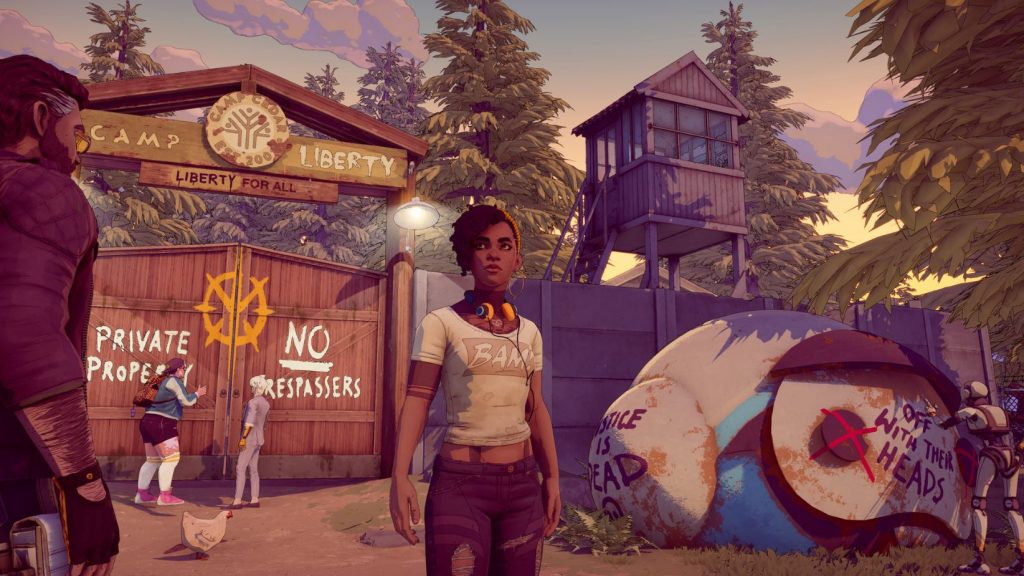 Dustborn was revealed by the excellent Red Thread Games at June’s Future Games Show and it caught my attention right away with its unique style, quirky humor, and charm oozing from every pixel of the trailer. So, when I was offered the opportunity to interview the team and get some more details on one of my most anticipated games of 2021, I couldn’t say no.

So, if you want to hear more about the game, its gameplay, narrative themes, and some of the design processes behind Dustborn, as well as what it has been like to develop the game, then this interview is for you.

Now that you have showcased Dustborn for the first time what does it feel like to have the first trailer out there and appearing at one of the biggest Digital Showcases this Summer?

Terrifying! Fun! A mix of strange and complex emotions! Most of all, we’re just happy that we can finally talk about the game, after keeping it to ourselves for so long. It probably sounds trite, but we’re incredibly proud of the work we’ve done so far, and incredibly excited to share it with the world. Making games is a virtual roller-coaster ride, and lifting the veil on a brand new project is like being at the peak and staring into the dark abyss: it’s exhilarating but also scary, and there’s a feeling it can go very, very wrong. (It hasn’t.) (So far.)

As the reveal trailer for Dustborn showed us, it looks like the game is about a lot of different things and has a number of different themes. So, what is the crux of Dustborn?

It’s about a lot of things. But it’s mostly about keeping hope alive in the face of adversity, maintaining friendships in spite of conflicts, and about the awesome and terrifying power of words. It’s also a story about being different, being an outsider, and being on the run from people who hate what you are.

And robots. Let’s not forget the robots. It’s also about robots.

Where did that idea start out and what were some of the inspirations during the early days of making the game?

For us, it always begins with the characters and the world, followed by the narrative. We generally have an idea of genre, setting, mood and tone, who the protagonists are — and then we build the game around that. Art direction, game mechanics, engine, specific features…all of that follows the world, the story, and (most importantly) the characters. That’s very different to how some studios operate, but Red Thread is first and foremost a storytelling studio. We tell stories using game mechanics and interactivity, and we try to do something fresh and different with every game we develop.

Still, we wanted Dustborn to be an evolution of the work we did with Dreamfall Chapters: a third-person adventure with a strong cast of diverse characters, in a vibrant, deep and original world, with some adventure-game mechanics and lots of branching dialogues and stories. But this time we also wanted to include combat-action, with a narrative twist that stays true to our storytelling heritage. And there’s also a bunch of features connected to the idea of weaponised words, and how words have the power to change the world.

The idea behind Dustborn’s setting and characters was also influenced by a series of political events that deeply affected us all, beginning in the summer of 2016, and continuing until…well, today. As game developers, we wanted to tell a story that felt relevant and thematically timely, with a cast of characters that could more accurately represent our player base and the setting, and to hopefully have some positive impact on the world…in addition to being an entertaining game.

Compared to Dreamfall Chapters and Draugen, Dustborn goes for a cel-shaded aesthetic. What was the decision behind that shift and did the team test out any other styles for the game before settling on cel-shading?

From the start, our approach has been to experiment with a clean and colourful illustrated art style, inspired by graphic novels, rather than traditional cel shading. You’ll see this in the game: it doesn’t look like anything else out there, although of course, the list of inspirations is long. The primary source of inspiration is, naturally, the personal style of art director Christoffer Grav, who has a background in graphic design, illustrations and comic-book art.

And yes, the game went through a series of changing styles and shaders before we settled on what you see in the trailer and screenshots. It’s been a long pre-production phase with lots of tests and experimentation, and the art style will continue to evolve for a while yet. It won’t be completely settled until the game is done!

We saw a brief tease of gameplay during the reveal at the Future Games Show that seemed to show combat, but I wondered if you were able to elaborate a bit about whether Dustborn is a more traditional narrative adventure (Everybody’s Gone To The Rapture, Gone Home) or are there deeper gameplay systems at play?

Dustborn is definitely not a traditional adventure. There are adventure elements here, especially with the branching dialogues and some (light, not too fiddly) puzzles, but the game has a big handful of original mechanics that separates it from more traditional adventure games, such as the narrative-driven combat system. We’re not talking about Wordcraft and Echoes quite yet, but that’s a major part of the game, along with the use of weaponised words in combat, exploration, and conversations.

There’s also a crew system that lets you tap into the talents of your band-members…and a bunch of other things we haven’t shown or talked about. Yet. It’s a hugely ambitious game, our biggest yet, with deep roots in adventures and in our previous games, but with a completely fresh approach to storytelling and story-playing.

When are we likely to hear more from you about Dustborn and see more of the game?

When you least expect it, we’ll be there, waiting in the shadows…

Oh, wait, no, wrong interview. Sorry. We’re about to abscond for the summer, but when we get back to work in August, we’ll start working on the next reveal. In other words: this autumn! Probably!