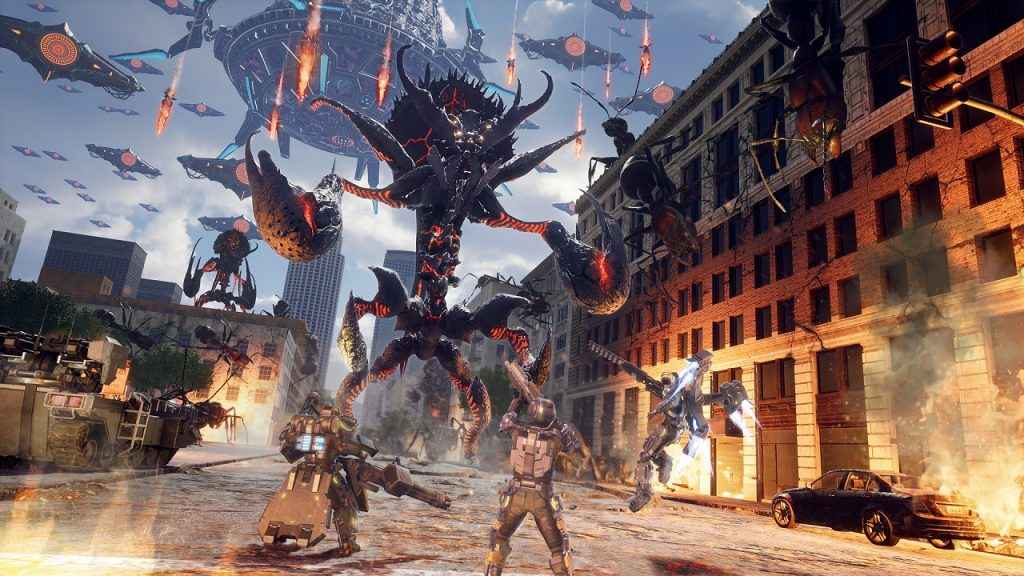 At Tokyo Game Show 2018, I had the pleasure of speaking with Nobuyuki Okajima, producer of the Earth Defense Force game series. Okajima has worked in the video games industry for many years, through many console generations. In my interview, I discuss with him the upcoming Earth Defense Force games, EDF 5 and EDF: Iron Rain, the franchise as a whole, and even touch on his thoughts on the future of games.

What do you think are core, important elements of the Earth Defense Force franchise?

Definitely one is the setup where you are surrounded by gigantic insects and bugs as the enemies. It’s a messed up situation where you’re alone sometimes with so many enemies around you to fight. That’s one of the core pillars of the series.

As you play through the game, you can change your circumstances and beat them all, sometimes pretty easily. That’s a feature that makes EDF unique. We definitely try to set the right balance: it shouldn’t be easy, but it shouldn’t be too difficult either. That balance is pretty important as well. That sense of achievement when you defeat enemies – I think that is the best benefit for players. The contrast between the times when you’re initially swarmed by enemies and then after, when you’ve cleared them all out, instills that feeling of success.

What were the main development and design goals for Earth Defense Force 5?

I definitely wanted to best entry in the series yet. I changed the system a little bit from EDF 4 and EDF 4.1. I wanted to set the right balance for players. I didn’t want to make it too drastically different from 4. At the same time, I wanted to make is so players feel like 5 is slight better and new.

As you may know, Yukes has worked on western titles in the past, including the WWE 2K series. Obviously, the head of their team can speak to me in Japanese. But additionally, all the team members there understand the western audience from their past development experience. I feel Yukes is the best team to bring EDF to a western audience.

What will make Iron Rain unique compared to past EDF games?

First off, IR’s story scenario and setting is very different. This one is set in areas of America, such as San Francisco and Los Angeles. The story is fairly separate from the mainline entries, with no real strong connection to past characters and stories. Another unique element of IR is that players can arm their exoskeleton called PA Gear to get new skills. That’s the big new gameplay feature that will make IR very different and unique.

HD collections and remasters of games have been popular the past several years. Has thought been given to producing an HD collection or remaster of past EDF titles?

A couple years back, I brought EDF 2, a pretty popular one in the series, to the PS Vita and PSP, which aren’t very popular systems in the west. We’re always looking into what we can do to bring older titles into the current generation. However, I am most interested in making brand new games for current consoles, rather than bringing old games back.

What’s your vision for the future of the EDF franchise?

Ah, that’s a tough question! For both EDF 5 and IR, each has its own goals. For the numbered, mainline entries, I want to continue with a similar approach and without changing the theme from past games. That’s what fans want, so I’m not looking to radically change too much there.

But at the same time, I want to better the gameplay and have a different kind of story. So with IR, I can try some new things. I can challenge some of the old EDF staples and add new or different features. And I want to make IR more appealing to the west.

I want to keep the numbered entries in the niche market they’re in and I want to be #1 in that market. With IR, I want to take EDF closer to the realm of a AAA title and perhaps someday make a big AAA EDF game.

What recent games have had an impact on you?

I’ve been working on many titles, not just EDF, so personally I almost never play games to use as references for development. So I rarely take ideas from other games. But some of my designers or team members do and might get inspiration from other games or something else. But for me, especially for EDF, the ideas mostly come from scratch.

Where do you see video games going in the next five years?

First of all, I think, as you know, that the content and number of mobile games will increase even more. There will be a massive amount of games, apps, and entertainment options for the mobile devices. But the games that last and survive will be ones that are unique and offer something special. Getting a player to love your game will be that important. The developers are going to need to understand that and keep that in mind to make their game stronger.

Also, these days there is that dichotomy of the big publishers on one end of the spectrum and the smaller, independent companies on the other side. I believe that rift will only get wider, with the large corporations able to put in more and more money into their games’ budgets. No longer will any mid-range companies really exist. You’re either big or you’re small.

In the past, there was more of a range in the size of game companies. Yet five years from now, the rich are going to get richer and the small guys will stay small.

You know years ago, there was really only consoles as the platform for video games – before mobile came in. But following that era, we saw that rift I talked about occur. It’s already happening and will continue to do so. That will happen.

Yet I think some people may come back to older console games. Fun is not always limited to the latest high-end, high production games. Some players will re-visit or discover older games for consoles and arcade titles. It’s already happening nowadays. Even EDF, while it has games that are on a current console, it has a bit of an arcadey, retro feel and design to it.