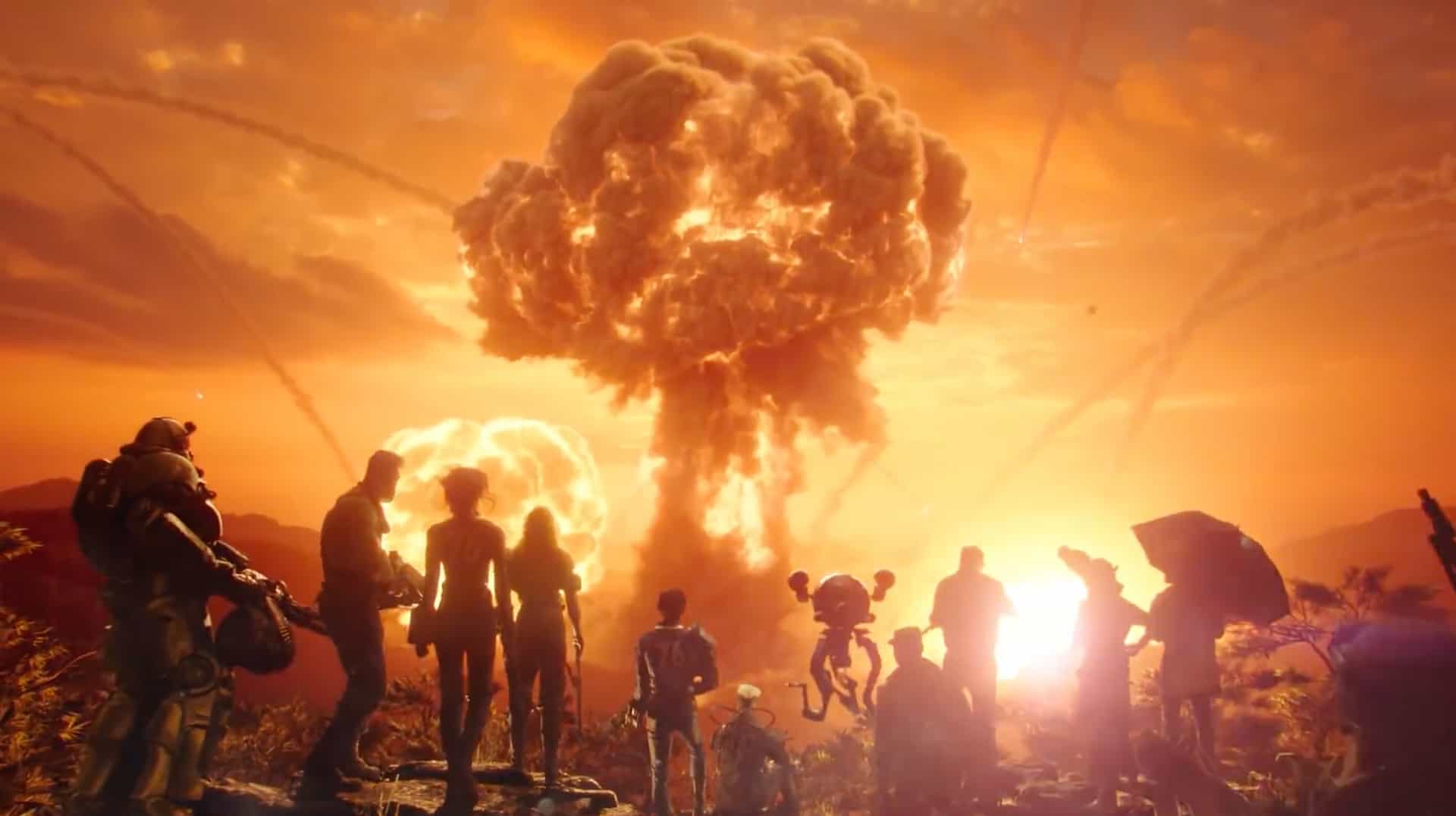 The Fallout 76 update 1.48 patch notes have been announced by Bethesda this afternoon, which you can now download for PS4, PC and Xbox One versions of the post-apocalyptic RPG. The update is pretty bulk and features a host of game fixes, plus Stash increase, the Heart Wrencher skin, and much more.

Read up on the Fallout 76 PS4 patch notes below.

Stash Increase: Hold onto extra gear with a Stash increase! We’ve increased the amount of weight your Stash can hold by 50%, giving you 1,200 pounds to work with.

New Inventory Tabs: We’ve added a few new tabs to your inventory menus so that you can better organize your gear, from your snacks and Stimpaks, to your outfits and armor.

New – This tab will keep track of all the items you gather during a play session, sorted by newest to oldest.

If you already have a stackable item in your inventory, like Steel Scrap, then new Steel Scrap you pick up will not appear in the “New” tab. Instead, it will be added to your existing stack.

Additionally, the “New” tab will reset if you leave your current world.

Armor – We’ve split Armor into its own menu tab so that you can keep your defensive gear separate from your other Apparel.

Food/Drinks – Your food and drinks are now split out from “Aid” into their own “Food/Drinks” inventory tab.

Please note that your Chems and Serums will remain in “Aid.”

Stack Weight: What’s weighing you down? From now on, when you select a stacked item in your inventory, the Pip-Boy will show you the individual weight and the stack weight.

Vending Machine Map Previews: The tooltip that appears when you’re previewing another player’s Vending Machines on the Map will now show the number of 1-, 2-, and 3-star legendary weapons and armor they’re selling. This way, you’ll have more information about the legendary goodies players are selling before you choose to Fast Travel to their C.A.M.P.s.

Additionally, Vending Machine categories that are empty will no longer appear in the tooltip to help you more easily see what types of items players do have for sale.

Atomic Shop: We’ve added a button to each category page in the Atomic Shop that will let you show or hide the items you already own, so that you can browse what’s still available with less clutter.

Build Mode Visual Improvement: We’ve changed the color of the outline that appears when you build objects in your C.A.M.P. from green to light blue, which should be more friendly for our builders who have colorblindness.

This change is only visible when the object you’re trying to place is in a valid location, and invalid placement outlines are still red.

Elder Tier Rewards: In response to community feedback, we’ve adjusted Daily Ops rewards so that you will always receive an item from the rare rewards pool whenever you complete an Op fast enough to reach Elder Tier.

Starting today, and lasting until February 16, you can claim a free “Heart Wrencher” Skin for the Pipe Wrench in the Atomic Shop, and then use it to complete Challenges that will unlock new cosmetic and consumable rewards!

Earn Lunchboxes, Perk Card Packs, and Repair Kits by defeating enemies with your Heart Wrencher every day during the Spread the Love event.

You can also claim outfits, and even a new variation of the Backwoods Bungalow, by completing Weekly Challenges with your Heart Wrencher equipped.

Apparel: Reduced the gap between the Deep Cave Hunter Backpack and the player’s back.

Apparel: The Pip-Boy light no longer shines behind the player in the Brotherhood Recon Helmet.

Apparel: Fixed a texture issue with the Fasnacht Beret.

Décor: The flame on Skull Candles no longer appears offset from the wick.

Lights: Yellow lighting effects no longer persist after the Color Wheel has been turned off.

Lights: Adjusted the lighting on the “Kill, Laugh, Love” Sign so that the word “Laugh” is no longer too bright.

Power Armor: Headlamps no longer shine in an incorrect direction when wearing a T-65 Power Armor Helmet that has a paint applied.

Weapons: Mind over Matter’s visual effects no longer appear to come from the player’s shoulder in third-person view.

Shelters: It is now easier to place structures, like the Seedy Shed, Backwoods Bungalow, and others inside a Shelter, as long as there is enough space to do so.

Stairs: Stairs can now snap to the front of the Brotherhood of Steel Scout Tower.

World: The “Discover Beckley” subchallenge for the “Discover Locales in the Ash Heap” Challenge can now be completed.

Rewards: Fixed an issue that could result in no rare reward being granted if the item the player would have received was a non-tradeable item Plan that they had already learned. Now, players will always receive a reward when this occurs.

Spawning: Fixed an issue causing enemies to sometimes spawn grouped together at an incorrect location.

Apparel: The Feral Ghoul Mask and Cuddles the Clown Mask no longer obscure the Pip-Boy light.

Apparel: The Swamp Camo Hazmat Suit can now be repaired.

Magazines: Fixed an issue causing “Live & Love 8” to cancel out the Very Well Rested bonus from a fourth Lunchbox.

Magazines: The “Astonishingly Awesome Tales 3” bonus has been changed to allows the player to breathe underwater and regain health while swimming.

Mods: Weapons with mods that add fire damage, like the War Glaive with the Flaming Blade mod, now work with the Friendly Fire Perk.

Plans: Fixed an issue that caused players to unlearn Plans for Lawn Flamingos and Wooden Desks.

Weapons: Fixed an issue where certain weapons that shoot multiple projectiles were taking too much condition damage.

Weapons: The Crusader Pistol Reflex sights no longer appear distorted when the Pyro receiver is equipped.

Weapons: The Stabilized Bull Barrel now correctly counts towards mods learned on the .44.

Weapons: Baton that have a paint or skin applied can now be changed back to their default appearance.

Weapons: Crossbows can now be changed back to their standard frame.

Weapons: Players can now correctly reapply the Wounding mod to a Bone Club after switching it to No Upgrade.

Brotherhood: Brotherhood of Steel Hopefuls and Initiates will no longer take damage when nuked.

Brotherhood: NPCs will no longer say hello to the player while they are talking to Russell Dorsey.

Putnam Brothers: Now have appropriate dialog if neither were recruited to Fort Atlas when the player revisits them.

Scribe Valdez: No longer comments on documents players have already collected during Mother of Invention.

Scribe Valdez: Valdez’s clipboard will no longer clip through her while in a downed animation.

Vendors: The Flatwoods Vendor will no longer sometimes appear invisible to players.

Client Stability: Fixed multiple crashes that could occur during combat.

Client Stability: Addressed a crash that could occur while scrolling the Notes tab in the Pip-Boy.

Connectivity: Fixed an issue that could cause PC players to receive a “Disconnected due to modified game files” error during normal gameplay and kick them from their current world.

Server Stability: Addressed an issue that could cause a server crash.

Performance: Addressed an issue that could cause the game client to hitch while viewing the Aid tab in the Pip-Boy.

Performance: Addressed an issue that could cause the game client to hitch when sorting the Pip-Boy by spoil.

Performance: Fixed an issue that could result in framerate drops inside Fort Atlas.

Dodgy: Now has a 2 second cooldown on AP drain. The damage reduction is still active during the AP cooldown. This prevents players’ AP from completely draining when hit by high rate of fire weapons.

Friendly Fire: The health regeneration effects from Friendly Fire no longer stack, but heal faster. This makes it so all weapons heal at the same rate.

Disarming Discovery: Dagger will no longer attempt to talk to the player if they are in the shed.

Disarming Discovery: Dagger’s Key will now longer reappear on her corpse after logging out and back in if the player has already looted it.

Dogwood Die Off: Fixed an issue where the quest target does not appear correctly on the trunk.

Fasnacht Day: Addressed an issue that could cause the Master of Ceremonies to spawn outside of the event area.

Fasnacht Day: The Robotics Expert Perk can no longer be used to Hack the Parade Marcher bots.

Field Testing: The Putnam parents are now more visible during the intro scene.

Field Testing: Fixed a rare issue that could cause the player to see a blank dialogue box when speaking with Paladin Rahmani.

Please Note: Technical Data can no longer be dropped, traded, or Sold.

Mother of Invention: The Mysterious Component now remains a quest item after relogging.

Mother of Invention: The bag of dirt in the Ultracite Battery housing will no longer disappear when the player returns to the instance.

Mother of Invention: Addressed an issue that could cause Scribe Valdez to not fight back when attacked by enemies.

Mother of Invention: Addressed a lore continuity issue in Rahmani and Shin’s dialogue regarding Paladin Taggerdy.

Over and Out: The animation of the transmitter getting destroyed no longer plays prematurely.

The Best Defense: A quest target now correctly points to Paladin Rahmani after being directed to speak with the Brotherhood upstairs.

The Best Defense: Fixed an issue that could cause more enemy waves to spawn than intended during the quest’s final encounter.

Scoreboard: Entering the Scoreboard quickly no longer causes the sound to disappear.

Atomic Shop: Once owned, the Brotherhood of Steel Icon now correctly appears in the Player Icons page in the Atomic Shop.

Fast Travel: Added an error message when trying to fast travel to a C.A.M.P. that the player is too close to.

Map: Fixed an issue where the map could be opened while viewing a terminal.

Map: Fixed a rare issue that could cause item counts in a player’s Vending Machine preview on the Map to mismatch the number of items in that Vending Machine.

Notifications: Fixed an issue where fanfare would sometimes not play after completing a timed challenge.

Perk Coins: Fixed a visual issue that could cause the player’s Perk Coin total to display an incorrect number of Perk Coins after scrapping Perk Cards.

Pip-Boy: Items with long names are no longer cut off in the Pip-Boy.

Quests: Fixed an issue causing the “Forging Trust” objective tracker to remain on the screen after the quest was completed.

Teams: The Team UI will no longer flash while repairing items at a workbench.

World: Fixed several locations in the world where players could become stuck.

World: Fixed several locations where players could view out of world