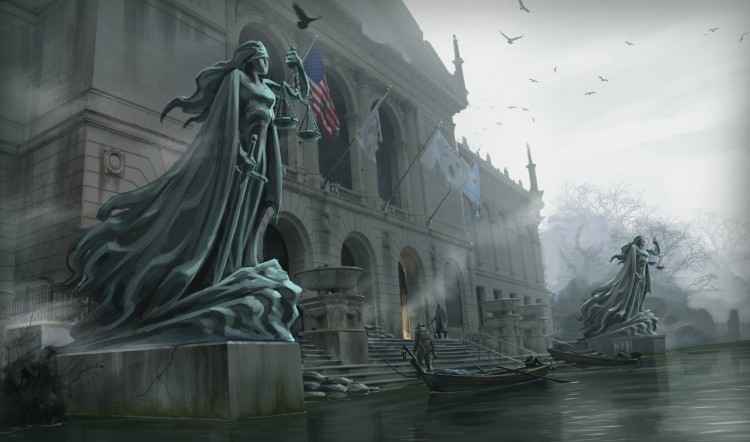 The Sinking City Trailer – Frogwares, developer of the Sherlock Holmes games, has released a new trailer for its upcoming HP Lovecraft-inspired mystery game The Sinking City.

The wonderfully grim, dank, mind-bending trailer isn't overly long or informative, unfortunately, serving rather as a public service announcement letting excited fans know the developer will be providing more details at this year's E3. Is a release date too much to hope for?

Releasing on PS4, Xbox One, and PC sometime later this year, The Sinking City is “a game of investigation and mystery taking place in a fictional open world inspired by the works of H.P. Lovecraft” - hence the enigmatic tentacle beast shown in the final stages of the above trailer - set in a fictional version of 1920's Oakmont Massachusetts.

Described as “a city trembling on the brink of madness” following “unprecedented floods of clearly supernatural origins”, players are put in the shoes of an unnamed private investigator sent to untangle the mysterious chain of events that led to the city's demise, all whilst trying not to succumb to the insanity that surrounds them.

From the looks of it and based on what we know, The Sinking City looks to weave together sleuthing (much akin to their Sherlock Holmes games) elements and action aspects to create a title that taxes the cerebrum as much as it does the trigger finger, all the while binding together the whole experience with deeply disturbing psychological horror.

Sounds great if you ask us!

You can catch The Sinking City trailer below:

We had the chance to sit down and chat with Frogwares about The Sinking City, among other things, back in August 2016. Be sure to set aside a few minutes for our full interview if you're interested in learning a bit more about the creative process behind the game, the developer's inspirations, and the history of the Sherlock Holmes franchise.