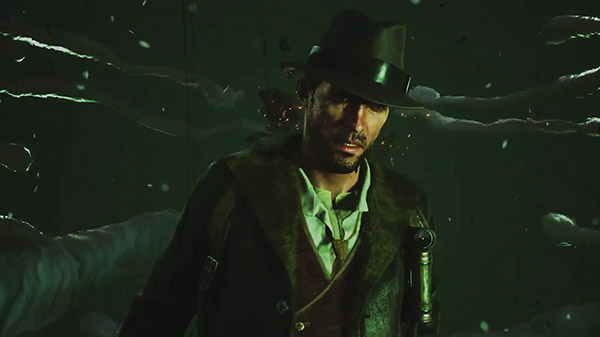 The surreal works of H.P. Lovecraft have long been a source of inspiration for video games, leaning heavily on terrifying players with his brand of eldritch horror and elder gods. Frogwares’ new game, The Sinking City, sets out to remind us that the Cthulhu mythos holds more than shambling, impossible terrors that haunt the night. It offers a slow accumulation of tension, inflicting an atmosphere of cosmic dread on those who would dare to seek the forbidden knowledge of the Old Ones.

As with all such ventures however, eventually one must ask if they were perhaps better off not knowing.

The Sinking City Has Hidden Depths

The Sinking City is an open world action game, set in the mysterious Oakmont, Massachusetts, devastated by floods and cut off from civilization. Thrust directly into the action, players take on the role of war veteran turned private detective, Charles Reed, who has been investigating a rash of mysterious disappearances. The victims have who complained about horrific visions before feeling overwhelmingly drawn to Oakmont, and then never to return. It isn’t just a job to Reed either, for he too suffers from nightmarish visions that weakening his grip on sanity, and feels the inexplicable call of Oakmont drawing him in.

From the moment he arrives in Oakmont, Reed finds himself a pawn in the machinations of factions and powers that control the city. From the petty schemes of smugglers and thieves to the byzantine plots of Oakmont’s Grand Families, the societal elite that pull the strings from behind the scenes. There will be many twists and turns as you unearth the truth behind the mystery of Oakmont, and the choice of who (or what) to trust is entirely upon you.

The Sinking City’s central mechanic revolves around gathering clues and solving mysteries. Every case usually has multiple outcomes, each of which may divert you onto a different path towards one of the game’s multiple endings. All the characters you talk to are very well voiced, and share the same stylized haunted look as every other character in the game.

The dialogue is well written and manages to convey exposition without hitting you over the head with it. In fact, one of the best features of The Sinking City is the fact that it does not hold your hand. You have to pay attention, review your clues, and make the best decisions you can about the truth of a situation usually based on not much more than your gut instinct.

The focus on investigation is interesting, and causes even side cases to put a greater focus on your familiarity with the major characters and events of the storyline. However, the application of the mechanic becomes time consuming and repetitive. Frequently you must scour a location for clues that you can interact with, some of which remain inaccessible until a specific clue is gathered causing you to have to survey the location again from scratch.

Granted, this can be alleviated by reducing the investigation difficulty setting, but this merely makes a repetitive task take less time to complete, not more engaging. Some objects must be rotated to a specific orientation to be able to pick them up or trigger a vision using Reed’s Mind’s Eye ability, a form of psychometry that you will rely upon multiple times throughout the game.

Reed also has the ability to piece together evidence at a crime scene using Retrocognition, which is presented as a ghostly after-image version of the detective vision seen in Batman’s Arkham series. At some locations when enough information has been gathered, a ‘tear’ will appear in the world which allows Reed to step through and catch glimpses of events and the people involved. By placing the events in the proper order, Reed gains a unique viewpoint on exactly what happened, opening new lines of thought and information about his cases.

Again, the theory is more interesting than the application here, as no real deduction goes into ordering the events, and there are no consequences for being incorrect.

Lastly, and most problematically, when the clues alone are not sufficient to provide you with a lead, you can do further research in several archives of information available at the Police Station, University Library, local newspaper, City Hall and others, depending on the type of information for which you are searching. Unfortunately, this can result in a lot of backtracking and frustration as not only do you have to choose the correct archive, but you also have to select the three specific search criteria that will produce the desired result.

This can cause a lot of confusion as some of the archives cover similar areas of expertise, several of the criteria are very similar (such as ‘Citizens’ and ‘Citizen Records’), and some searches that should be applicable to the desired results do not work because they aren’t the ones the game wants. To top it all off, you might be looking in the right location with the right criteria, but not turn up any useful information because you haven’t selected the correct clue to research, or accidentally changed the clue by hitting the d-pad while entering the desired criteria.

Moving back and forth between these archives and other case locations, you will travel back and forth across Oakmont multiple times to gather clues and information, to the point where it seems intentionally punitive. To be fair, there are a fair number of fast travel locations available, with several in each district to limit the amount of sprinting necessary by the player, but even using them all the time you begin to realize how much of your game is spent just running from place to place in an unnecessarily big, effectively empty, city.

Even something as simple as picking up items is made more difficult than necessary, with some allowing the player to pick them up with a single button press, and others requiring the button to be held for a few seconds to produce results. Considering how scarce ammunition and resources are throughout the game, and with no way of replenishing them beyond searching new areas and completing cases, you will approach Fallout levels of scavenging without even a commerce system to supplement your inventory in times of need.

This is especially a problem on all but the lowest combat difficulty setting, as the ungodly creatures that will shamble forth to end your life are ridiculous bullet sponges. Virtually every encounter will leave you dry on ammunition, and the creatures themselves do not carry any loot to provide a return on your investment. If not for the fact that wiping these abominations out provided experience towards your skill tree, I would have avoided combat entirely throughout the game, and even the few bonuses given aren’t hugely impactful to the flow of the game.

Combat itself is serviceable, if uninspired. There is a limited variety of creatures present in the game, with a few human(oid) antagonists thrown in from time to time, to mix up the flow. You can tell however that combat was not the developer’s first priority, as weapon variety, effectiveness, enemy AI and player control all feel like afterthoughts added to an adventure game late in development. Don’t be too concerned however, as death carries with it no penalty whatsoever, as you will respawn at the nearest fast travel location with all of your spent ammunition restored and full health, completely removing the tension from any combat encounter.

Regardless of these issues, The Sinking City is still a very interesting exercise in character development and world building, and might still have been considered a hidden gem if not for some of the glaring technical issues at launch. NPCs frequently clip through the floors of locations or objects in their hands might carry over into a conversation cinematic with semi-humorous results.

Enemy creatures often clip through walls, objects and doors, further affecting your combat enjoyment. Most egregious of all however is the constant screen tearing present in the game even when on a PS4 Pro, especially in indoor locations during your investigations. Almost every time you turn, you can expect some amount of screen tearing ranging from a slight hitch to multiple tears that almost induce motion sickness. I am hoping this issue is addressed with a future patch because it had a major impact on my enjoyment of the game.

The Inability of the Human Mind to Correlate All Its Contents

In closing, The Sinking City seems to be a victim of its developer’s own lofty ambitions. With so many great pillars in the game, it pains me to see technical issues and minor complaints mar what could have otherwise been a shining new addition to the video game arm of the Cthulhu mythos.

While some can be addressed in future patches, many of the problems with the game are a result of the developer’s reach exceeding their grasp. I will certainly be first in line for a sequel however, assuming that Frogwares can apply some of the lessons learned from The Sinking City’s faults.

The Sinking City review code provided by the publisher.

The Sinking City is a flawed gem, marred with technical issues and repetitive gameplay. The interesting worldbuilding and story elements are insufficient to carry the game in the face of poorly applied mechanics. The Sinking City could have benefited from an additional delay and a tighter game play loop.