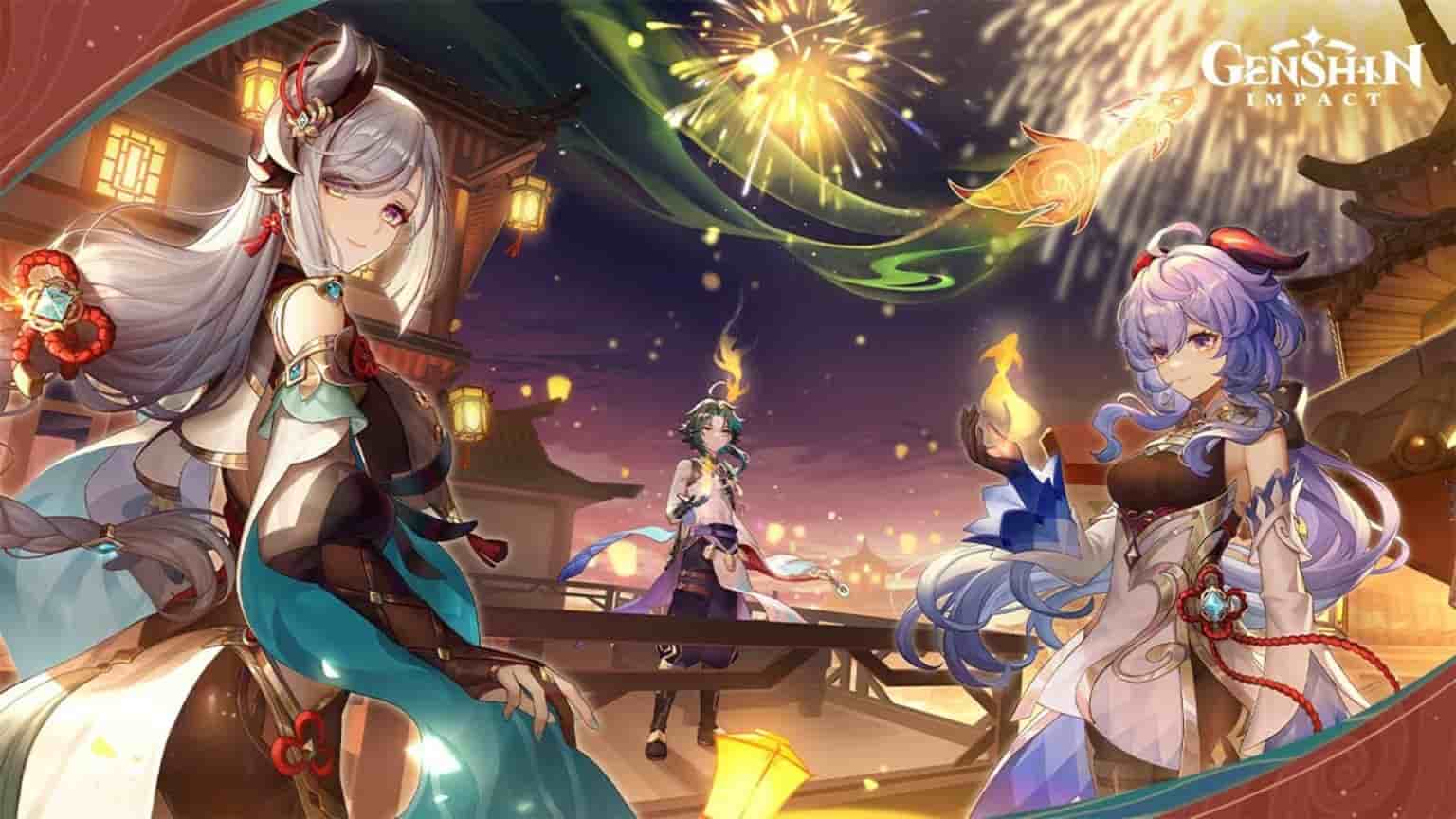 ◇ An adepti disciple with a most unusual air about her. Having spent much time cultivating in isolation in Liyue’s mountains, she has become every bit as cool and distant as the adepti themselves.

◇ A renowned Liyue opera singer who is skilled in both playwriting and singing. Her style is one-of-a-kind, exquisite and delicate, much like the person herself.

The now-awakened Enkanomiya calls out to a hero. Beneath the still waters lies a new realm.

◇ After the Version 2.4 update, Enkanomiya in the Inazuma region will be available.

During the event, log in on 7 days in total to receive Intertwined Fate ×10 and other rewards!

Reach Adventure Rank 5 or above

“Fleeting Colors in Flight” Event: Take part to obtain Ningguang’s outfit and a 4-star character from Liyue of your choice

During the event, complete all the conditions for “The Moon’s Comely Brow” to obtain Ningguang’s outfit “Orchid’s Evening Gown.” Complete four themed challenge quests to obtain Affluence Talismans, Immaculate Talismans, and Conquest Talismans. You can exchange them at “Prosperous Partnerships” to obtain a 4-star Liyue character of your choice or they can be exchanged at the Event Shop for rewards such as Crown of Insight, Fireworks, or the event-exclusive Lantern Rite Furnishing Blueprints.

Reach Adventure Rank 28 or above

Complete the Archon Quest “Chapter I: Act III – A New Star Approaches” and Archon Quest Interlude Chapter: Act I – “The Crane Returns on the Wind”

◇ Keqing’s formal wear. Amidst the beautiful dawn of the Lantern Rite, the threads weaved by days of hard work intertwine into a light yet magnificent appearance.

◇ Ningguang’s formal wear. The long cyan skirt traces her elegant curves, and the butterfly wings at her ankles lend the outfit a touch of light grace.

Archon Quest Interlude Chapter: Act I – “The Crane Returns on the Wind”

◆ After completing specific quests or fulfilling certain criteria, the above commission quests may be triggered.

◇ A predator that lies in wait within the pitch-dark watery depths. It appears to have adapted to some unknown power out in the deep seas such that it can use elements other than Hydro…

◇ A monster of the Abyss Order who sings of the warmth of the dark flames.

◇ High elemental concentrations have resulted in the creation of this floating creature.

2. New Achievement categories such as “The Light of Day,” and additions to the “Wonders of the World” and “Memories of the Heart” categories.

5. New feature in Serenitea Pot for creating sets. Travelers can create and customize their own sets, add or remove Furnishings from those sets, and move and rotate them together as one.

Note: Custom sets will not be saved to the Sets tab. The set will be canceled after all the Furnishings within it are stored.

9. New display of consumable materials for Weapon Enhancement Materials on the Forging page.

10. New Mail Box function: some important mail such as birthday wishes will be automatically transferred into the Gift Mail Box after you have collected the rewards.

Mail within this Box will not expire over time.

11. New shortcut wheel customization function. You can customize the shortcut wheel’s system function access on “Settings > Controls” (This feature will be available after you reach Adventure Rank 20 or higher).

14. After completing the Story Quest “Lupus Minor Chapter: Act I,” Rifthound Whelps will appear in Mondstadt’s Wolvendom and its vicinity.

Updated the monster lineup on Floors 11 – 12 of the Spiral Abyss.

• Certain opponents in this challenge possess the Honed Spirit effect, which grants them 10% Physical and All Elemental RES. When opponents with Honed Spirit take hits from attacks that are considered Normal Attack DMG, they will lose 3% Physical and All Elemental RES. A maximum of 30% of each may be lost this way. The RES lost this way will be reset every 20s.

Starting from the first time that the Lunar Phase refreshes after updating to Version 2.4, the three Lunar Phases will be as follows：

When the active character hits opponents with attacks that are considered Normal Attack DMG, there is a 50% chance of unleashing a shockwave at the hit opponent’s position, dealing AoE True DMG. One shockwave can be released in this way every 0.3s.

(a). Adjusts the height of the central stage disc in all levels on Floors 9 – 12 of the Spiral Abyss.

(b). You can view enemy details on the Party Setup page while continuing your way through the Spiral Abyss.

(c). When challenging the Spiral Abyss, if there is an Abyssal Star that has not been obtained, the hint text on the left will be grayed out.

2. Adjusts the animation of some claymore-wielding characters when holding their weapons.

1. Enemies will no longer be regarded as targets when they are defeated and thus will not block attacks from bows or some catalysts.

2. In Mona’s Story Quest, “Astrolabos Chapter,” the English voice actor for the NPC Huai’an is changed to David Goldstein.

3. In Diona’s Hangout Event, her English voice actor will be Dina Sherman once again (in previous versions, the voice of Diona in English was temporarily provided by Jackie Lastra).

1. Optimizes the sorting displays for Crafting and Forging menus.

2. Optimizes some operating experiences for using the World Map.

3. Adjusts the claiming rules for the purchase of Gnostic Hymn on different platforms. The rules are as follows:

4. After being redirected to the corresponding Domain from the Source section of Weapon Ascension Materials or Talent Level-Up Materials, the Domain for said materials will automatically be selected after entering.

5. Optimizes the UI style of some buttons and interfaces.

7. Due to the addition of new World Quests, the position of some enemy camps and scene objects near the Teleport Waypoint near Liyue’s Lisha area have been adjusted.

8. Reduces the combat difficulty of the World Quest “Fang of Watatsumi”: decreases the total time required to defend the Ley Line Monolith.

9. Optimizes button control experience of the controller when holding down a button to skip.

10. The Version 2.4 update will start on 2022/1/5 06:00 (GMT+8). At the same time, we will make changes to the application providers of Google Play and Samsung Galaxy Store. After this system maintenance, COGNOSPHERE PTE. LTD. will be responsible for the release of Genshin Impact on the Google Play and Samsung Galaxy Store platforms. The application provider of Genshin Impact in the Apple App Store will also be changed to COGNOSPHERE PTE. LTD. in the near future.

Please rest assured that the new publisher will not affect the quality of the game and its services, so you may download/update and play the game with peace of mind.

*This is a work of fiction and is not related to any actual people, events, groups, or organizations.