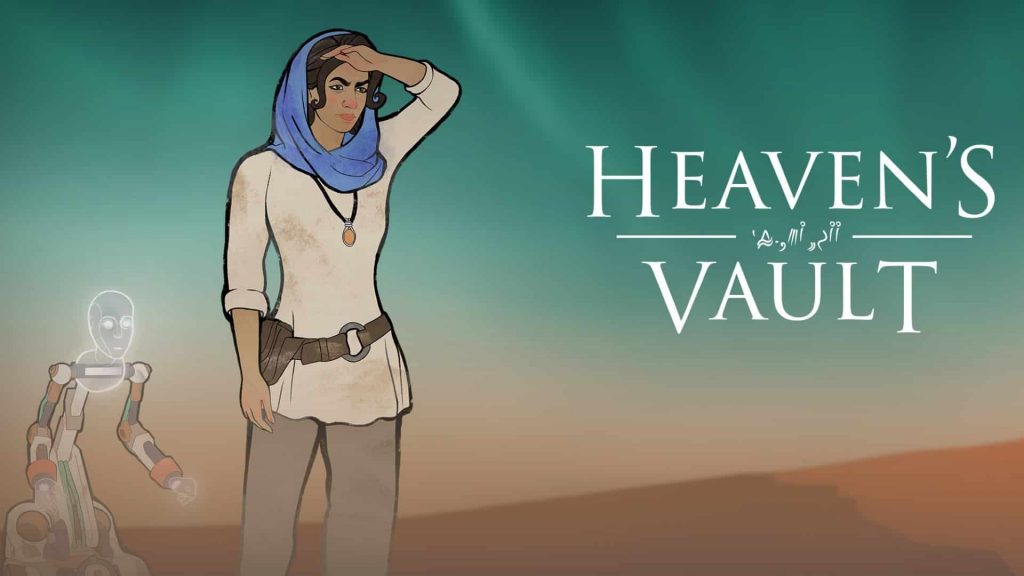 There have been no shortage of archeologists on PlayStation. From the likes of Nathan Drake and Lara Croft to lesser known explorers such as Adam Venture, the platform is deeply familiar with folks who like to rummage around dusty old ruins in search of the past. Heaven’s Vault’s main protagonist Aliya is one more name to add that list, but unlike her contemporaries in the field, Aliya’s weapons of choice are language and history, rather than a pair of face-blasters and some well-worn fisticuffs.

A science fiction adventure quite unlike any other, players take control of Aliya Elasra, an archaeologist who, with the aid of her dry-humoured robot Six, must explore a mysterious region of space known as the Nebula to track down a missing colleague.

A departure from the action-tinged archeology adventures that have been on PS4 so far, Heaven’s Vault is a combat-free odyssey that instead places a premium on exploration, dialogue and language. Viewed from a third-person perspective, as Aliya, players must navigate their way around the environment, picking up clues, striking up conversation with various individuals and translating ancient dialects in order to track down the wayward academic.

Inkle Studios penchant for multi-branching narratives (as amply evidenced in their current magnum opus, the superb mobile effort 80 Days) is on full display in Heaven’s Vault even this early on, as Aliya can converse with a number of different folks about any number of subjects which in turn drives the story down different avenues as people react to her in a variety of different ways. Multi-branching dialogue hasn’t felt quite this good (or this well-written) since the early days of pre-EA Bioware.

At it’s very core, Heaven’s Vault is akin to a detective title where through research, discovery and conversation you can accrue clues which in turn lead you closer to your goal. The difference however, is that Inkle Studios have fleshed out the deep history of a number of different intergalactic civilisations, which makes finding out more about them all the more compelling to do.

Ultimately, Heaven’s Vault is a meditation on the power of words and how understanding and learning their meanings and translations can open up the door to forgotten, and even forbidden knowledge. As an expert in history and ancient languages, you must decipher inscriptions on objects and in the environment by trying to work out the texts and meanings of the dialect at hand.

How this is accomplished is by matching a phrase word from a selection to the writing at hand. By using the context of the words available to you, you can work out which sentence sounds the most accurate, and if you’re correct, those translated words become known to you for the future and can be used to aid you in translating future texts later on.

Whether you’ve just spoken to someone notable, discovered a fresh clue or translated a new part of an alien language, an event is triggered which is then put into an extended timeline for you to view, adding a real sense of place and history to the proceedings as you track your interactions with people, clues and different places.

Speaking of places, to travel to other locations, players can board Aliya’s ship, The Nightingale, whereupon a course can be set and followed to the next planet, moon or other point of interest that you wish to visit. From here, you are required to steer the ship through space streams (think water rapids in space), until you reach your destination. Luckily, if you go off-course you can reset easily enough – though ultimately these sections are less a test of a skill and more of a way for Aliya to lay some good old fashioned monologues down to flesh out her state of mind.

It isn’t until your reach your first destination outside of the starting area of the University of Iox that you realise how clever Heaven’s Vault is when it comes to navigation and traversal of its environments. With no radar or waypoint driven UI in place, you must simply find your way to your destination by tracing landmarks and key points of interest – all of which is achieved from speaking to the local inhabitants, and, you guessed it, translating the local dialect to make sure you’re on the right track.

From a visual standpoint, Heaven’s Vault is quite the curio. The jerky turning animations of the various characters are touch jarring at first, and seemingly owed to the fact that sprites are used rather than full 3D models, but the initial awkwardness of this artistic choice is soon forgotten as Heaven’s Vault’s cast of characters reveal themselves to be beautifully hand-drawn creations that are super easy on the eyes to say the least.

Likewise, the environments, though less geometrically complex than that seen in other third-person adventures, are clean and stylish affairs that are bursting with character and crucially, evoke the sense of place and the history of the civilisation that they are supposed to represent with aplomb.

So far, so good then. This latest offering from Inkle Studios looks to be an effervescent celebration of discovery, history and the power of the written and spoken word and I for one, cannot wait to unearth more of Heaven’s Vault when it launches sometime later this year.

Published and developed by Inkle Studios, Heaven’s Vault is set to release on PS4 and PC sometime in 2019.