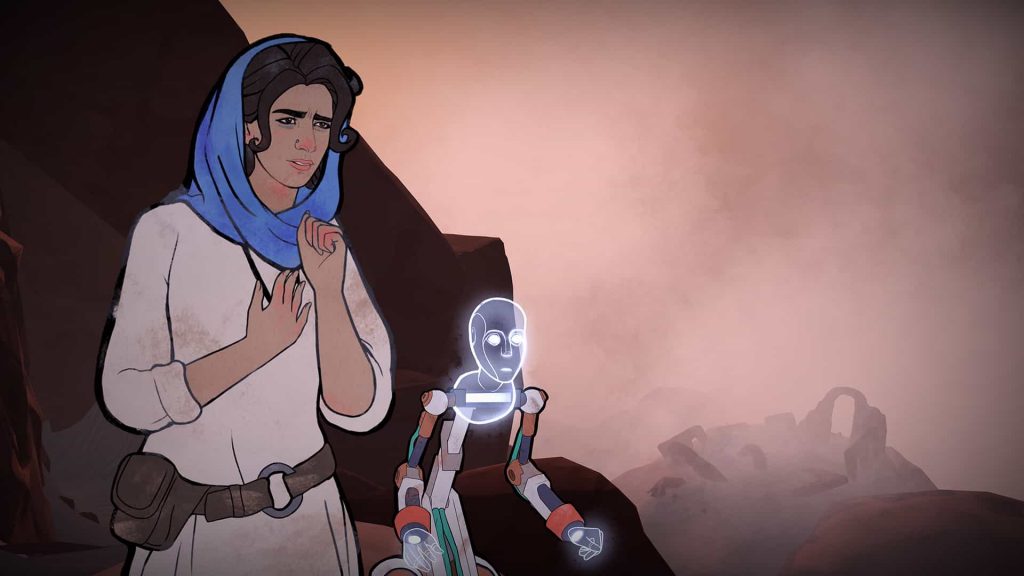 Language isn’t just about being able to understand and convey to others the particulars of contemporary events. The words and phrases that provide the sum of any language also serve as echoes in time when viewed retrospectively; passages of dialect that don’t just reflect their topic, but also shed some light on the author behind their formulation.

A rip-roaring novel made pixel, Heaven’s Vault from 80 Days developer Inkle Studios is a third-person adventure which zeroes in on this concept with laser-like precision and delivers with aplomb one of the most engaging adventures the PS4 has seen to date.

Heaven’s Vault is a masterpiece of storytelling

Everything about Heaven’s Vault strikes as unique, from the spellbinding beats of its story to the marvelously layered and delicately detailed universe in which its narrative machinations unfurl. As Aliya, a talented linguist and archaeologist, players are thrown into the deepest depths of a massive galactic enigma called the Nebula as they search for a missing colleague from the University of Iox; the seeming center of all ‘cultural’ civilization in the known cosmos.

Accompanying our wayward explorer on her cosmic odyssey is Six – a delightfully written, track-driven robot whose numerous retorts, rebukes and matter of fact statements are generously infused with withering amounts of biting, acerbic sarcasm. An intergalactic road trip of sorts, Heaven’s Vault feels initally like National Treasure meets Sherlock Holmes with a generous dollop of the sort of point and click goodness akin to something seen in the Broken Sword games or The Secret of Monkey Island series. It is, of course, so much more than the total of such surface (and possibly lazy) comparisons.

At its heart then, Heaven’s Vault plays out akin to a detective show or a sleuth novella, wherein the key evidence and smoking guns are represented, almost entirely, through the written word, or hieroglyph, depending on your level of understanding. As Aliya and Six travel through the Nebula, landing on various moons, planets and ruins, they encounter a broad swathe of characters who in turn find themselves enveloped in the mystery of the missing academic.

Much more than merely shallow NPCs who blatantly exist to solely serve the story and the advancement of the player through it, each and every individual that Aliya encounters and interacts with in Heaven’s Vault is very much a fully-fleshed and written entity; with their own beliefs, ethnicity, physical traits, personality and quirks that separate them from everyone else. Refreshingly, Heaven’s Vault’s cast of characters are a varied lot who actually feel like they exist because they are part of something larger, something deeper, rather than just being around the serve the whims of the story.

How you interact with these characters is also something which is neatly threaded through into Heaven’s Vault overarching non-linear design, too. With multi-branching dialogue and characters that actually remember what you’ve said to them and how you’ve treated them in the past, it all comes together in a deliciously dynamic whole that provides Heaven’s Vault with significant replayability beyond just a single playthrough.

When you’re not rooting around in far-flung locations for clues or chatting with a swathe of helpful or unhelpful locals, you’ll be taking Aliya’s ship The Nightingale, along the space rivers of the Nebula – tracking down ruins and moons from which you can excavate new artifacts, trinkets and clues in order to further your investigation. Representing a break from its point and click design beats, these ship flying sections are a touch fiddly and hardly groundbreaking; though they do provide ample time for Aliya and Six to chew the fat road-trips style and engage in idle banter about a great many things; reinforcing Heaven’s Vault superbly organic storytelling in the process.

As a linguistic archaeologist, Aliya finds her seeking out hieroglyphs of ancient, long-forgotten dialects in order to piece together clues as to where her missing colleague, Renba, could have wandered off to. Such symbols can be discovered practically anywhere too – in books, on artifacts or even stitched into clothing. It’s in the magic of translating these dialects however, that the core of Heaven’s Vault reveals itself.

Every passage of text boasts a range of symbols, and from that selection you’ll soon come to realize that some symbols repeat themselves in other passages and strings of text. For each word that requires translating you are given a choice of four possible meanings as to what it could be, however there are some visual clues about each symbol that can hint towards the correct translation; three lines going down might indicate light, for example.

Luckily, Aliya and Six aren’t alone when it comes to translating these dialects as the former can opt to return to the university and lean on her learned colleagues for help in trying to verify the inaccuracy of her comprehension – with translated words being used, in turn, to aid in the translation of other new words later on. Pointedly, it feels like you’re putting together a linguistic jigsaw, with words and symbols connecting you to people who lived hundreds or even thousands of years ago.

The key thing here, is that it is entirely up to you in regards to how you go about comprehending these ancient languages. You don’t have to return the university and like-wise, you don’t have to explore every ruin or location that you stumble across either – this is your mystery to solve and by proxy, this is your game to play, making Heaven’s Vault a far more open and approachable prospect than some might assume it to be.

Beyond its superlative investigative adventure gameplay and enrapturing plot stuffed with intriguing characters, Heaven’s Gate acquits itself commendably well elsewhere too. Visually speaking for instance, the game is a kaleidoscopic platter of eye-stroking delights.

Beautifully hued planets, moons and locations give way to cleanly, though simply detailed environments rife with color while the character models themselves are in fact cel-shaded sprites, rather than full 3D models, whose faded legs and ghostly previous steps suggest an impermanence – that we are just travelers in time for whom only the written word is a constant.

Your ears also receive a sensual treat in the form of the game’s soundtrack. An ear-tingling marriage of violin strings and wider framed orchestral beats, the composer/performer/vocalist ensemble of Laurence Chapman, Leos Strings and Hayley Glennie-Smith respectively have all outdone themselves here; producing a musical score that not only perfectly accompanies whichever location Aliya finds herself in (the melancholy strings of the Nebula are especially affecting), but one which also lingers long in the memory once the controller has been laid to rest.

Another nice touch that developers Inkle have wrought with Heaven’s Vault is that every time you play you are greeted by a ‘story so far’ mini-synopsis that brings you bang up to date to all your progress so far. It’s a small thing ultimately in the grand scheme of things, but one which is very useful in getting reacquainted with the game after a time away; akin to revisiting a bookmark stuffed between the chapters of your favorite page-turner.

Some technical quirks aren’t enough to meaningfully tarnish the experience

Though Heaven’s Vault notably excels in a wide variety of areas, there is something to be desired in the technical performance side of things. Frame rate issues crop up at various points during the game, and it’s an issue which becomes obvious early on when Aliya and Six visit Maersi, a densely detailed moon that abounds with all manner of flora and fauna.

Though it never becomes or approaches anything resembling unplayable, it is difficult to ignore and is perhaps reflective of the fact that Heaven’s Vault represents the most ambitious project for Inkle to date, for whom toil in the past has been restricted to largely two-dimensional efforts on mobile and PC platforms. That said, though a touch frustrating, it’s nothing a good old fashioned patching couldn’t address.

Developer Inkle Studios are expertly practiced hands when it comes to crafting mesmeric stories stuffed with characters equal to the task and Heaven’s Vault, its debut PS4 title, continues the studio’s lofty caliber in this regard. A deeply meaningful meditation on the written word and how such writings generate a connection between the author and the reader across the ages, Heaven’s Vault weaves a tale like no other.

Boasting a highly intelligent, beautifully written story that smartly lays mysteries on top of enigmas and slowly unwraps them for you based exclusively on your own approach, Heaven’s Vault stands as an astonishing monument to superb storytelling and intelligently framed adventure genre beats meaningfully entwined to create a sum without equal.

Heaven’s Vault is available now on PS4, PC and Xbox One.

A totally unique odyssey that immediately envelops the player in a richly detailed universe ripe with intriguing lore and some of the finest storytelling on PS4, Heaven's Vault is an essential odyssey for all to embark upon.