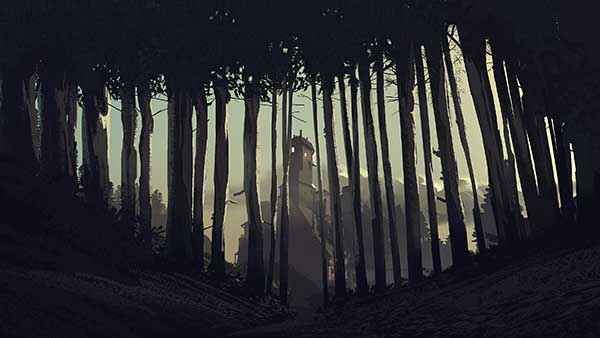 The following article was written in conjunction with our What Remains of Edith Finch review. Such was the effect of the game on our Senior Editor, Tim Nunes, he wanted to share more about his experience with this compelling narrative adventure. It contains some SPOILERS.

Edith Finch is a young woman, on the precipice of societal adulthood, exploring questions that no one can answer. The Finch family, dating back to the late 19th Century, has stood against a family curse, an almost genetic predisposition for disaster. What takes place in What Remains of Edith Finch offers up a glimpse into the world of a family wrought with something they cannot control. It’s not a mystical force, and it’s certainly not a curse. The Finch house, set out in the middle of the woods in upstate Washington, is unsettling and disorienting in its shape and construction, but nothing about it screams corruption. All the components to a house are there: kitchen, living room, entry way, bedrooms, even a library. What makes the Finch house so disorienting, apart from creaks and groans and peculiar architectural additions, is how just under the façade — the home’s habitable surface — lays a labyrinth of cubby holes and crawlspaces that lead into all the sealed-off and locked rooms in the house.

All these secrets were constructed into the house by the first Finches to make it to the mainland, the keys and pathways all hidden in plain sight, but the Finch’s curse was a part of the family well before the house, and it built its way into the foundations. As I said before, the Finch’s curse is nothing mystical. It’s very real. From the beginning, the problem with the Finches took hold, and whether each member of the family has the same illness or not began to no longer matter. The house, built with a mind mis-wired by illness, became just the environment needed to keep making things worse. Piles of books sit stacked in the kitchen. Walkways around the house run jagged paths through bramble and over tree branches. The pet cemetery and the family cemetery reside just off the porch in between the house and the ocean view. The remains of the old Finch house peek out just above the water out in the bay, a small red light slowly blinking evermore. Everything on the property is a reminder that something is historically wrong, and no one along the way has broken the mold affixed to the Finch name; these problems are too established to face alone, and everyone copes on their own.

There is an inherent charm to What Remains of Edith Finch that is imperative to embrace. Each family member has his or her own life, and each life is explored just enough to embody their individual tragedies; one eats fake fruit out of imagination-driven hunger, one holes up under the house in paranoia, one swings too far on a swing set in pursuit of flight, and one just wishes to elongate a magical bath time. Each story is unique, and each story has its own gameplay element tied into it that makes each stand out in both inspired and tragic ways. All of these familial delusions are so rout with grandeur and humanity that it becomes such a struggle to see them end. Each end is not a separation from the delusion, either. In fact, the untimely demise of each Finch plays a part in their individual delusions, never breaking ambiance. Thus, the tragedy is made tenfold. None of them realize they are facing their imminent end, and they embrace it all in ways only their minds could muster.

The very real Finch curse is a bona fide illness long left unattended, and this resonated with me. Plenty of hints of what the illness might be are hinted along the way, but none of these illnesses should be fatal. In modern times, most of these problems can be treated or managed for normal lives, but too much of the Finch family perished at its own hand before mental illness was recognized as it is in modern days. At the same time, the family was so caught up in their curse hyperbole that they never bothered to try and help each other. In a way, it was solitude that killed them and not their illnesses. This is made apparent in how everyone was alone in their final moments; ironically even Edith, who pursues the answers hidden in the Finch house that no one dared to find.

What makes What Remains of Edith Finch such a memorable spectacle is its conclusion. Edith is faced with the option to pass onto the last remaining Finch the interpretations she has learned from the delusional perspectives of her family. To her, there is no option. She wants to tell her child these stories so that the Finch curse, if it were to surface, is not handled in the same way that it has for the past century.

She has realized that the Finches have been struck by mistreated and ignored mental illness, and letting her child go unaware of what might happen is a game of Russian roulette that she, and the Finch namesake, cannot afford to play anymore. Edith gives control to her child, a secret key hidden away among all the Finch odds and ends that no one took the time to use. Unlike the Finch legacy, Edith paves a way to seek help rather than offer up the same cyclical path that over and over leads the Finch curse back to the Finches. Edith is the first Finch in a long line of Finches to try another way. Like them, she is only left with the option to leave behind her truth in a notebook, but instead of hiding it, she leaves it in the child’s possession so that the way she began to pave can be continued rather than hoping the child will seek it out.

What Remains of Edith Finch puts such an importance on remembering that you cannot handle everything on your own, and I needed something like this. There is a major stigma looming over mental illness in today’s society that keeps those of us with issues from seeking help, from wanting a better life, from finding that state of mind that gives us satisfaction and success. Edith Finch shows the aftermath of that kind of thinking. For the better part of a decade, I pursued psychology in hopes that answers to questions in my family would magically fall into my lap, but they didn’t. I was scared of the schizophrenia and bipolar disorder that plagued my father throughout my entire childhood. I watched him throw away help over and over, and I feared I’d get caught in the same stubborn loop, causing the same kind of delusional harm to those around me. Hell, I’m still scared.

While I’ve seemingly avoided schizophrenia, as it generally arises during brain development, small signs of bipolar have begun to take the foreground over the past couple years–signs that have always been there–that I have ignored for too long. I’ve recently begun paving a path that my family never took so I can get out of these uneasy highs and debilitating lows, a journey laden with traps and holes, and Edith Finch crossed my path at the exact time I needed her; another step in the right direction.

The signs are always there, like the keys and secrets hidden in the Finch house, and they must be understood before we can move forward.