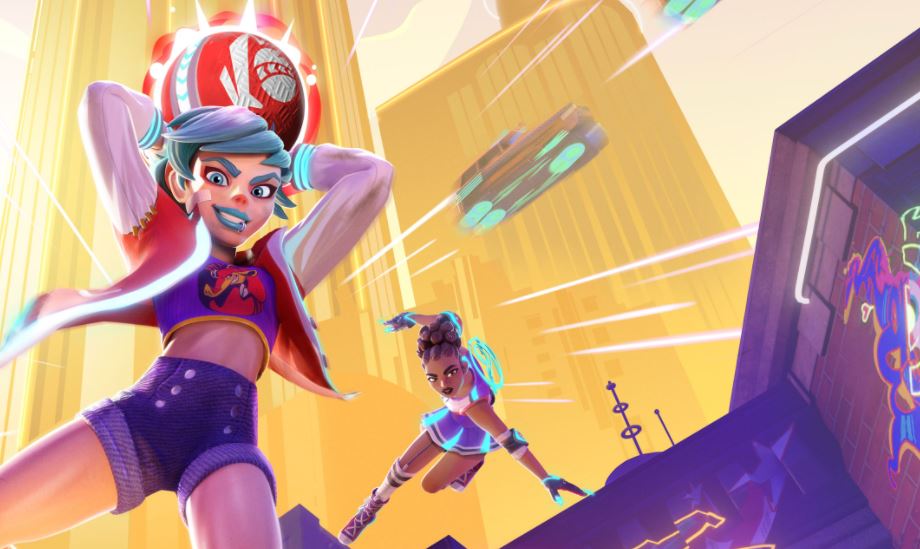 Knockout City PS4 Hands-On Impressions – Multiplayer games are hard to make these days, jumping into an oversaturated market that is fighting for everyone’s limited time. But whilst many titles have failed to capture a percentage of the market, EA’s latest original from Velan Studios, Knockout City, has the chance to break into the market and capture its own audience, thanks to quick, snappy gameplay and its unique mould of team-based dodgeball mechanics.

Fitting Into The Crowd

If you spend 10 minutes looking at Knockout City you will get the impression I did when watching the presentation I saw earlier this week. My main thought and likely yours too will be “oh it’s another one of “those”. Another multiplayer game, with a battle pass, cosmetics, daily challenges, etc.” And honestly, you would be right. Knockout City is as much of a live service as the dozens of others that we have seen in the last couple of years alone.

At this point the formula should be enshrined in the Oxford English dictionary as Knockout City is on the surface not doing anything particularly special; in fact, it is eerily, eerily similar to last year’s Rocket Arena, which EA also published under its originals label.

But unlike a lot of these liver services, Knockout City isn’t a hero-action game. Nope, Velan has made the core of the game about its gameplay and the matches you play, rather than building a deep narrative-focused universe, with a dozen characters that each play differently. 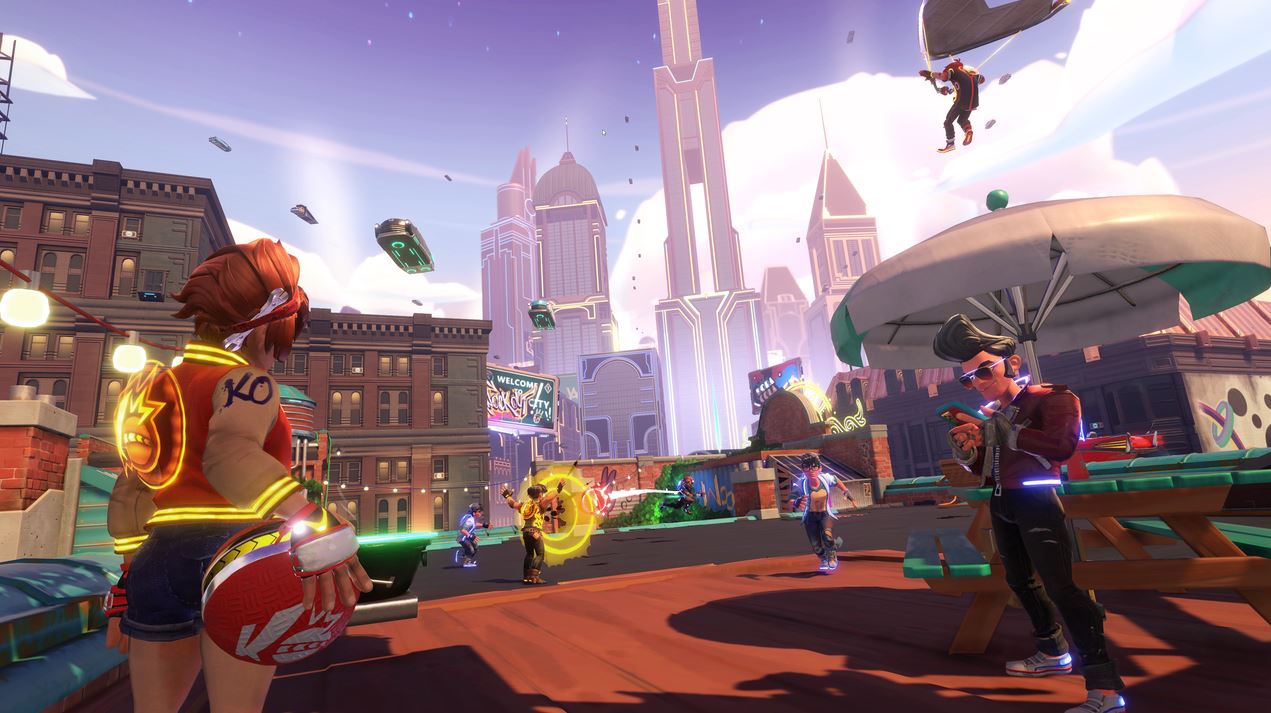 A story does exist here, but the narrative complexities you would find in something like Rocket Arena, Lawbreakers, or anything else similar have been taken out in favor of creating a deep and enjoyable core loop that is a lot of fun. This was even highlighted in our presentation with CEO Karthik Bala saying that when testing character abilities they found it to be a layer of complexity too much.

So, what is that gameplay core? Boiled down to its simplest form, Knockout City has you run around a small, but multi-storied map picking up dodgeballs and lobbing them at your opponents to deplete one of their two hearts, at which point when both hearts have been destroyed they will die and respawn. Rinse and repeat. That is the core combat loop of Knockout City, which is deepened through the ability to catch balls thrown at you, return them for extra damage, and also charge your throws.

This is then added to even more, by the ability to pass balls to teammates, moving it around an arena and finding an opening that is best for you and your teammates. You can also enter Ballform as your character at any point, which allows you to roll around the field and be picked up by both friend and foe and used as a weapon whilst none are around. You can even land a super move at this form by charging a teammate up and launching them into the air for an ultimate smash attack on the ground. 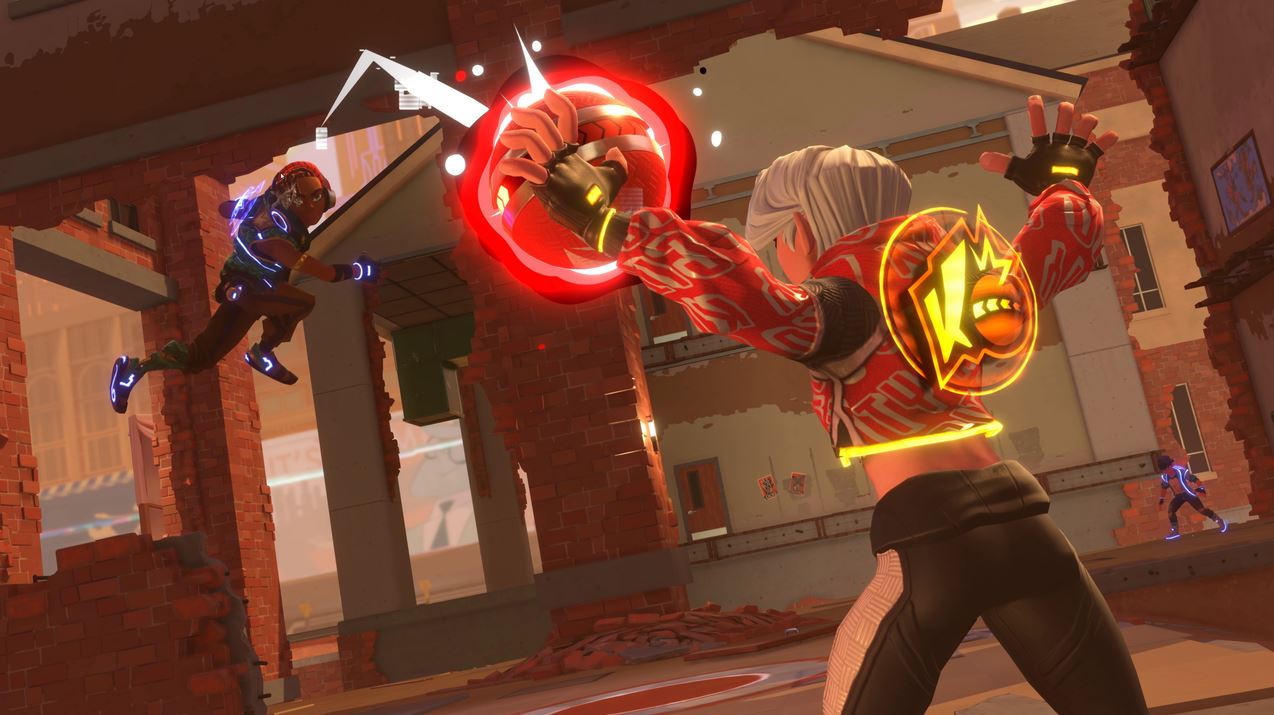 It’s actually quite a deep and complex system and adds a risk and reward aspect to the gameplay, with the choice to throw a teammate into the action, risking their lives, while being able to take out an enemy in the process. Combine that with the respawning balls and the fact that ammo (balls) is never really expended here as upon death the ball just bounces onto the floor and you have a multiplayer game all about scavenging the battlefield for resources while keeping an eye on the combat.

Variation is subsequently added through the use of Special Balls, of which there are six at launch, that offer special abilities like being able to float like you’re on the moon, or trapping an enemy within them and forcing them to roll around and break free. My favourite was the massive bomb ball, that would explode after a while upon being picked up.

This whole dynamism and the atmosphere of a constantly changing battle felt incredibly polished and grabbed me instantly, far more than a number of other live services have done. With around 85 developers at Velan Studios and talent from the Skylanders team, you can really feel the polish and love built into the gameplay, art, and music of Knockout City and it really captivates you once you try it out due to how snappy and responsive combat and controlling your character feels. 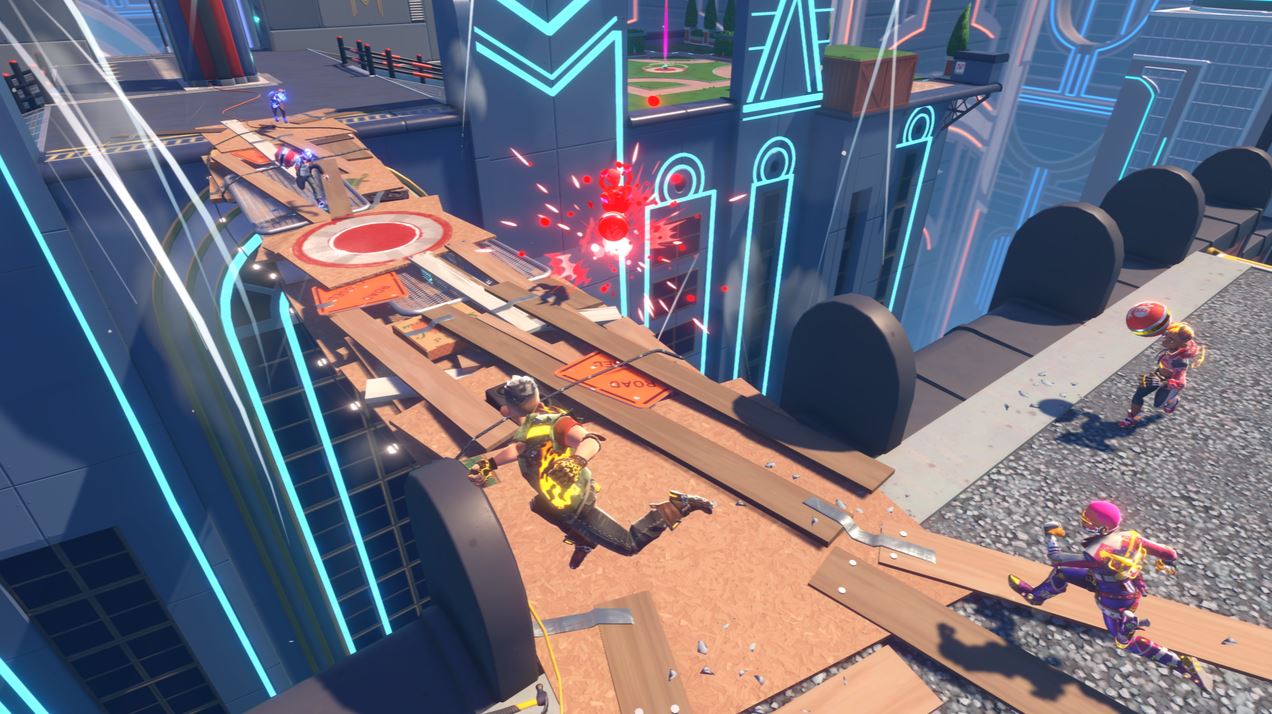 Support Being Done The Right Way

As with any live service, the future is just as important as the launch. Knockout City looks to have the right idea when it comes to long-term support and keeping people engaged.

The launch of Knockout City will come with five maps, five modes, six Special Balls, hundreds of levels in the Street Rank progression system with hundreds of cosmetics along with it, competitive League Play, Private Matches, daily contracts with currency rewards, and a 32-player clan system called ‘Crews’. This all runs on dedicated servers with skill-based matchmaking.

That is a lot for launch, but Velan has promised that seasons will arrive after launch, running for 9 weeks and introduce new Balls, playlists, and cosmetics with fun twists. The time length of these is short enough that it provides a nice snappy post-launch plan and ensures that seasons won’t run for half a year or more and players end up getting bored with the current offering.

Cosmetics are also done really, really well here. Microtransactions will be in the game, but the currency used to buy them can be earned throughout play (seemingly at a steady rate from what I could tell in my two hours playing). Contracts have the currency as a reward and the second currency, which is rarer is used for color swaps, but as far as we were told is only earned in-game. 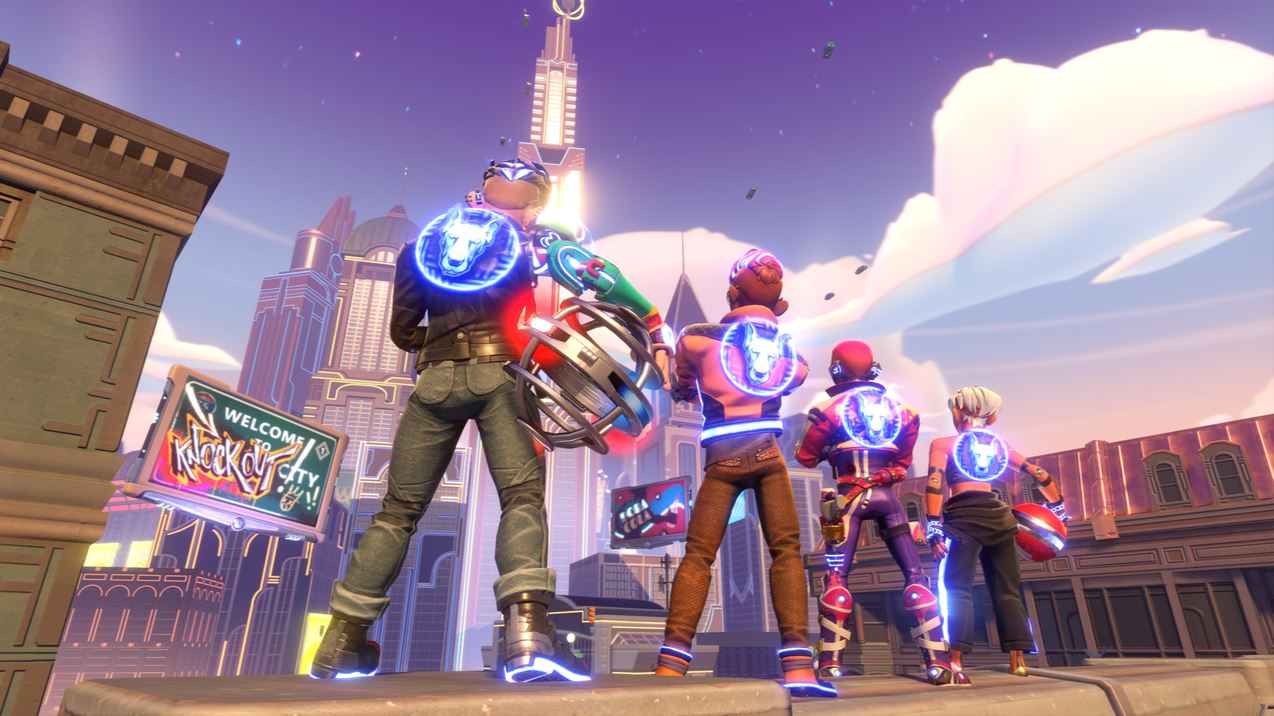 Design-wise they are also impressed with the rarer cosmetics we were allowed to try out feeling special and looking incredible, with unique flashy effects like animated patterns. Color swaps do exist, but the cosmetics you can earn in-game are worth grinding for as they will definitely help you stand out as you customise your brawler, changing their look, gender, design and more to help differentiate you on the battlefield.

Whilst I did really enjoy my time with Knockout City I have a few lingering questions and concerns, mainly that although the game will be free for everyone at launch (via a free trial), I don’t quite know if there is enough complexity, variation, and support lined up for Knockout City to continue thriving months, maybe even years after launch. I do think it will last longer than a number of other live service games, however.

Finally, the game could do with some better telegraphing to players, specifically when it comes to which ball you are holding and where enemies are planning to crash down with their ultimate moves. Right now both teammates and foes ultimate smashes are signified by a giant purple splodge on the ground which moves. However, it isn’t clear whether a crash will be from a teammate or an enemy. But hopefully, this can easily be changed by the launch in May. 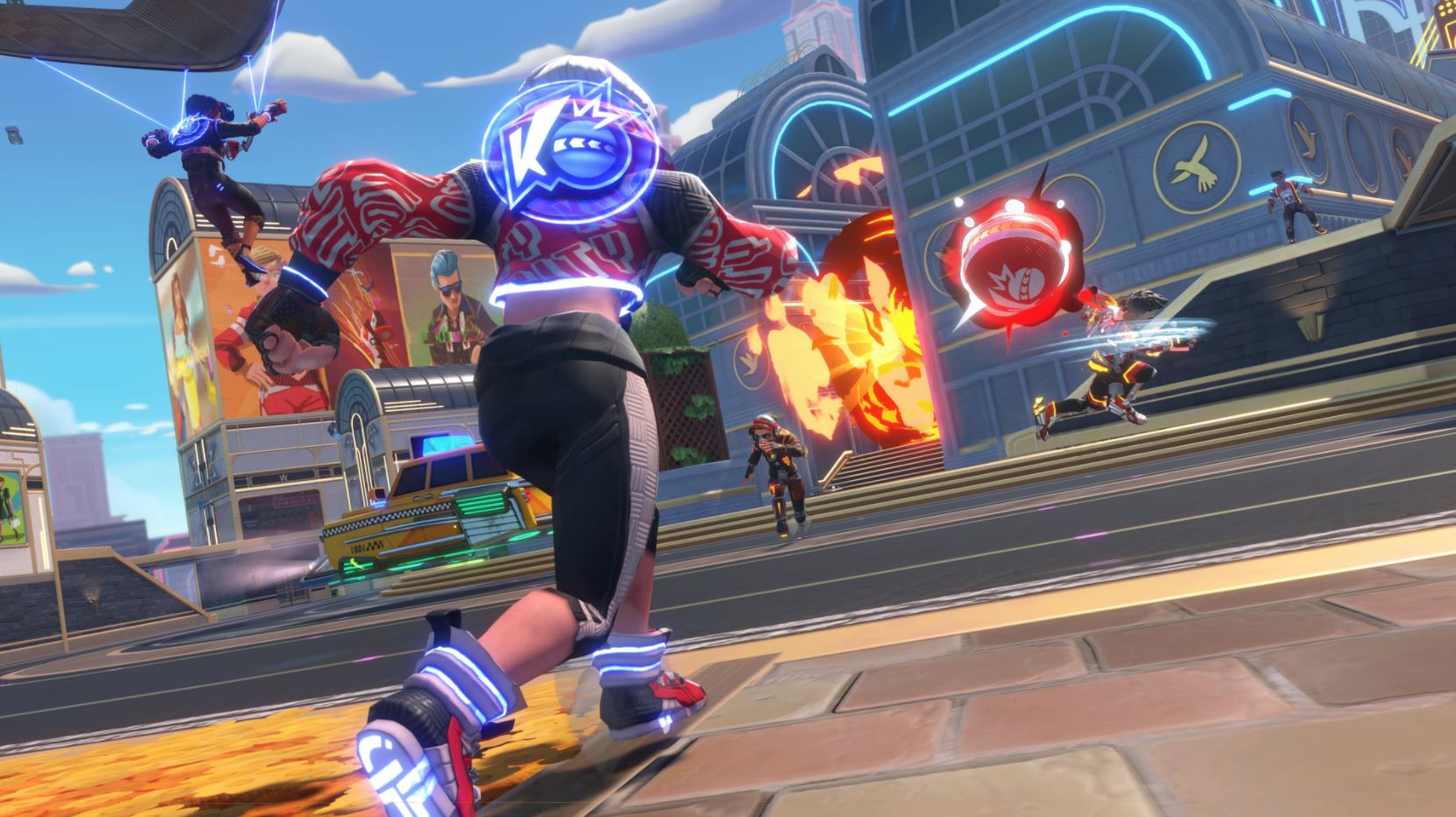 Knockout City should be a game you keep a close eye on. It has reached a lot of its potential already and it felt like a polished, ready-for-release game. Colors pop, the music and art style are fantastic, and the gameplay is simple to pick-up but deep in complexity.

Some small tweaks are needed, but Velan Studios could be onto a winner with Knockout City and I am excited to see more of it, its post-launch support, and content which hasn’t been showcased to the public yet.

Knockout City releases for PS4 on May 21, 2021, and will be playable on PS5 via backwards compatibility.

Preview build of the game for PC provided by publisher.