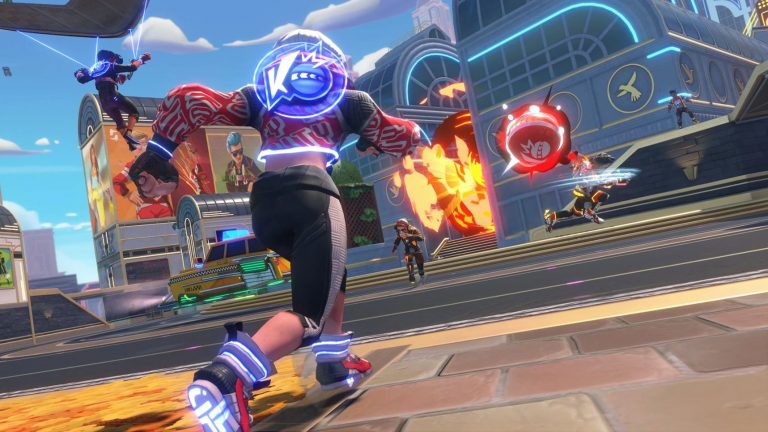 Velan Studios has announced the full list of Knockout City update 3.01 patch notes for your viewing pleasure, which brings a fresh batch of content to the table alongside the usual dose of bug fixes. Read up on the latest Knockout City patch notes below.

Dev Note: This was a tough one to implement in time, but we’re thrilled to bring you a fully operational Brawl Pass, complete with Deep Space Dispatches with lore about the DJ and Z3R0. We’re really excited to share this with all of you.

Dev Note: It feels strange just listing these features as bullet points, because there’s so much that went into each one of them, from creation to implementation. My favorite is pairing the Z3R0 voice with the [REDACTED] motorcycle. Let us know what you think!

The Brawl Shop now has even more new items up for sale. Now, where players once saw empty store slots in Daily Items, they will now see XP Boosts, Energy Drinks, and Style Chips. Go spend those hard-earned Holobux. The Brawl Shop will also no longer try to sell items that players had already purchased in Bundles.

Dev note: Z3R0 must have hacked the Bundle store’s records and made them available to the Daily Items. Change your passwords regularly, brawlers.

Dev note: With Season 2 we introduced Leaderboards, a highly requested feature from our top players who wanted to see how they stacked up against other top players. Once players reached the top tier, Diamond, we used their Skill Rating to rank them within that tier. But we got a lot of feedback about how Skill Rating was calculated and changed after matches. Now, Skill Rating will always go up for wins and down for losses, adjusted by how well-matched the game was for each team. We will be watching how Season 3 progresses and tweaking some values behind the scenes, so please continue to give us your feedback.

Improved visibility of the Danger Zone in Face-Off mode by making it taller.

Balls thrown to teammates will no longer add overcharge past the first level when perfect catching, bringing this in-line with the way passing works

Fixed a case where the, “You left voice chat,” notification could remain stuck on screen if you were disconnected due to lack of activity

Fixed some cases where a player joining a group that was starting either Training or a Private Match could end up by themselves in the Hideout, or be put into a Private Match when the Group Leader canceled matchmaking at the last moment

Fixed a scrolling issue with League Leaderboards where scrolling to the top sometimes didn’t show the top entry properly.