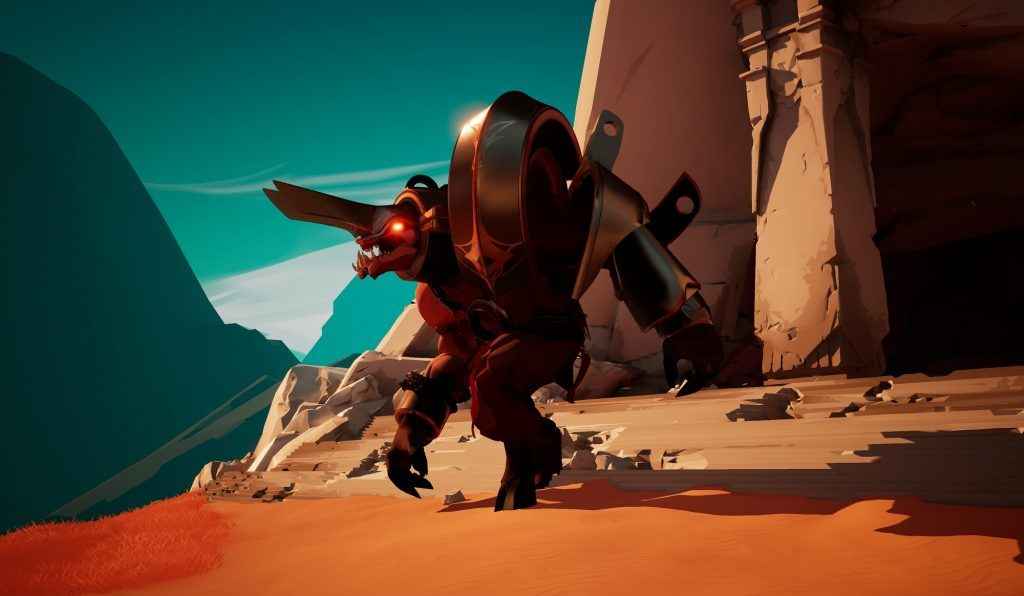 The open beta for Disruptive Games’ new PS VR shooter has been ongoing since Tuesday, November 13th. We took Megalith for a spin this weekend and were deeply impressed with what we found.

While many in the media are comparing Megalith to Overwatch, Megalith has much more MOBA DNA coursing through its veins. Once you dive in, the differences between Megalith and Blizzard’s titan are striking.

Megalith strikes us as an almost mini-MOBA, with players teaming up for 2v2 battles. While we didn’t see any way in the beta to team with friends, one can assume that matchmaking options will be bolstered in the final release. As it is, players are paired up randomly. During our time with the beta, we had no problem getting into matches in less than a minute.

Easy to grasp, fun to dominate

Leaving the chat function engaged is recommended, as this is a game that thrives on cooperative strategy. Like most MOBA-style games, partners start at their own base and set forth down a fairly linear path towards their opponents’ base. Walking along with players are some cannon-fodder minions.

The opposing team has the exact same stuff as you do, and the beta is only using one map, so it’s pretty easy to get the lay of the land. Each team has a set of automated towers in the middle of the map that rain down fire on the opposing team. The first objective is to wipe out the opponent’s minions, while allowing yours to draw the tower fire so you can in turn take out the towers.

This is easier said than done, because your opponents will be trying to do the same thing to you. The outcome of these early skirmishes is critical, as getting rid of the defensive towers allows you to push further into enemy territory.

The next order of business is to take out your opponents’ siege inhibitor, which is a big block-y thing that is laying off to the side of their base. Doing so will unleash a giant siege monster, who will lumber forth and start wrecking shop on your opponent’s hopes and dreams. From there, its just a matter of following along with the monster, wiping out opposing minions and keeping your opponents at bay while you ransack your victims’ base.

All of this is laid out so clearly that we immediately grasped the concepts in our first match. Megalith is highly accessible, and offers a great deal of strategic fun. Communication is key to success, as there are just enough side paths and branches in the map to allow for flanking.

Taking out both opponents gives your team a twenty second window to do damage on enemy structures unhindered, which is deeply satisfying. When your opponent was fighting you in the middle of the map and they respawn to find themselves facing the giant siege monster, the cackles of glee become downright evil.

There are five Titan characters available during the beta, with each participant having random access to two of the five. Pre-ordering the game opens up all five Titans (and grants a sixth upon full release). Literally every player we teamed up with indicated that they intended to pre-order, which we considered a good sign for the game’s long-term viability.

We played the beta with two Move controllers, and while the control scheme was unique, we had little difficulty getting accustomed to it. The move buttons on each controller allow for incremental turning, while the trigger button on the left controller will move the player forward in whatever way they are facing.

This manner of locomotion was highly comfortable, and we had no motion-related issues. Attacks, including your ultimate, are mapped to the right controller’s face buttons. The only thing we struggled with was the need for a button to back away from enemies without needing to turn, which we hope will be addressed before final release.

Visually, the game is very attractive, with a distinct character style for the titans and an ominous, cavernous feel to the map and menus. Tracking is rock solid, and we never had any problem with the game losing track of our Move controllers.

While the beta is somewhat limited with only one map available and just a couple of characters at a time, it gives a good view of what the final game will be like. We liked what we saw quite a lot, and would encourage any PS VR owners with a slight amount of interest in Megalith to download the free beta and take it for a spin. We think you will like what you find.