It takes minutes to see where the divide could be with opinion on Mirror’s Edge: Catalyst, the long-awaited sequel/reboot to the much-loved (by those relative few who played it), much-flawed, free running gem Mirror’s Edge. Catalyst instantly feels more fluid, easier to understand, and generally far more player-friendly than its predecessor. As such, there is bound to be some groans from some of those who have waited nearly eight years for this latest entry, based on their love of the original, flaws and all; but despite how it may seem, developer DICE (they of Battlefield and Battlefront fame) is not toying with the fanbase—it’s trying to expand it. If anything, it looks like it could succeed in keeping almost everyone who might have an interest in Catalyst happy if my time with the preview build is anything to go by.

The preview begins at the very start of the game, with the original title’s heroine Faith Connors leaving prison to return to her old life in the sickeningly clean-looking city known as Glass. Just before she’s about to leave, a man calls to her from a doorway, asking that she come with him. It turns out the man is called Icarus, and is a member of the group of free running couriers Faith used to be a part of before her jail stint. These couriers smuggle packages and info drops around Glass by using the rooftops, doing so in rebellion against a totalitarian conglomerate of corporations that hold the city in its collective vice-like grip, headed by a man named Kruger and his swarm of henchmen. Icarus removes a homing device from Faith, which soon alerts the authorities. It might be a little early to judge the story, but from my time with the game, it’s standard ‘rage against the machine’ stuff, which works at least. From here you are thrown into the game proper and anyone familiar with Mirror’s Edge will feel right at home with what they see. Stark shades of white architecture against the blues of the sky above, and the brilliant red of a dumpster that indicates ‘you can do some parkour off that’. As I draw nearer the dumpster, a prompt appears on it telling me to press L1, which is Faith’s general purpose button for clambering around. Here it is used to jump up off the dumpster and onto the nearby building’s roof. You’re tasked with a simple run at this time, with the game gently introducing your basic move set throughout it. L2 slides Faith underneath obstacles and softens higher drops with a tactical roll, while holding down L1 on certain jumps springs Faith higher to reach greater heights and distances. Movement in Catalyst is already greatly improved from the original, and is indeed better implemented than the only other first-person title with parkour in it, Dying Light.

Contextual movement plays a big role in Catalyst, as it did in 2008’s Mirror’s Edge, but here it just flows so much more naturally. The redesigned ‘Runner Vision’ leaves red trails to give you a basic GPS route to objectives, and it is super useful for getting to grips with the control scheme and by the time I’d completed that initial opening mission, I felt pretty comfortable with it. Fret not fans who fear casualisation of the game’s core; it is literally only there as an aid, as you can take whatever route you wish without even using Runner Vision. Something the game does actively encourage now as the city of Glass is open world, and ripe for making the most of Faith’s urban exploration skills. Even in this preview build, I was able to clamber around a decent chunk of the map in the Downtown area of the city. It keeps that flowing theme that Catalyst hangs its identity upon embedded into the very design of Glass. 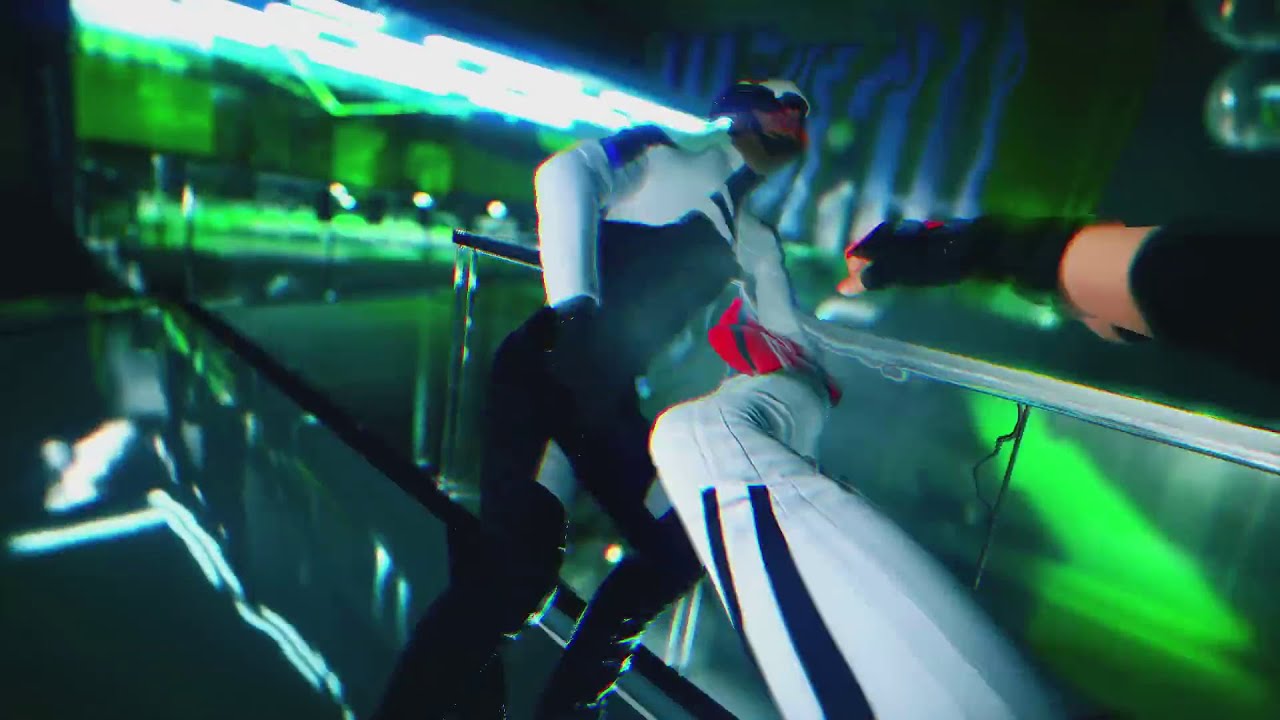 An example of this fluidity is that the only load times I found in this preview were from having Faith plummet to her doom. The 2008 game was boxed into levels that had limitations needed for a game of its time and budget, which was as much a positive for concentrated free running purity as it was a fundamental drawback for fully utilising that ability. Catalyst though, allows its parkour the freedom of the city, giving you a bigger, better toolset to do your own thing with instead of simply finding the best path within a very linear level. Even the indoor sections I played here were rife with opportunity, letting you switch between swift attack and strategic escape swiftly and without issue. You can still find the self contained routes with something the game calls ‘Dashes’, effectively time trials that implement aspects of EA’s Autolog system found in Need for Speed titles to challenge and compete with others playing Catalyst. It’s a rather pleasant addition, especially with the tighter controls. Friends and other players can set their own routes for you to best as well.

Impressively, combat, easily the weakest part of the original, also blends into Faith’s movement more. Presses of Triangle or Square when a run is blocked by an enemy can knock them down and allow you to keep running with barely any break in your stride, keep your stride up consistently enough and you can enter a ‘Focus Mode’ that allows you to avoid gunfire and non-retaliatory blows whilst running. It makes Catalyst all the more interesting to watch and more of a joy to play. Once you have to stop running however, that’s when combat gets a bit awkward and begins to jar with the fluid nature of the game. Of all the things I had to learn in Catalyst, regular combat was the hardest to grasp. Currently it feels a little unwieldy and confusing, and most importantly it feels at odds with the sleek pace the rest of the game exhibits. It is fairly cool to see the finishing moves where the camera switches to third-person and shows you Faith kick ass in a stylish manner, but that’s pretty much the highlight of regular combat. Perhaps with practice and upgrades it may become more enjoyable, but it was easily the least pleasurable aspect of the preview, and the most disappointing given that there are improvements to combat elsewhere.

So, Mirror’s Edge: Catalyst is looking like an improvement on the 2008 model in many ways, but it does still have some potential issues going forward. While the rooftops and vistas are genuinely gorgeous in a minimalistic way, the ground below often looks a bit off. Some areas have a lack of depth to them as a result, but this could be something that’s a work in progress, but it does take you out of the atmosphere of what is otherwise a well-designed cityscape when it feels like you can touch the ground hundreds of feet below because the art design looks a bit unfinished.

Longevity was my other concern going into the preview. What is there beyond running? Thankfully the exploration, challenges and various side-missions provide you with plenty of distractions, it seems. It’s just a shame the collectables aren’t a bit more inspired than the usual audio logs and ‘find x amount of this thing,’ but hey, it won’t matter so much if the game itself continues to be as fun to explore and play around in as I found it in these early missions. I got to try out the skills system as well, and again, it’s nothing we haven’t seen before, and probably not all that necessary, but I suppose that if it does keep drip-feeding you new ways to play then it could well be the right decision. Time will tell with that.

I came to Mirror’s Edge: Catalyst not expecting a lot. It’s had a fairly quiet development cycle and I personally wasn’t all that enamoured with the original beyond the admittedly cool concept and the pedigree of the developer behind it. I come out of it pleasantly surprised, and intrigued by what the full game can offer should a few of its current quirks get smoothed out.

Mirror’s Edge Catalyst is due out on PlayStation 4 in the U.S. on June 7 and in Europe on June 9.