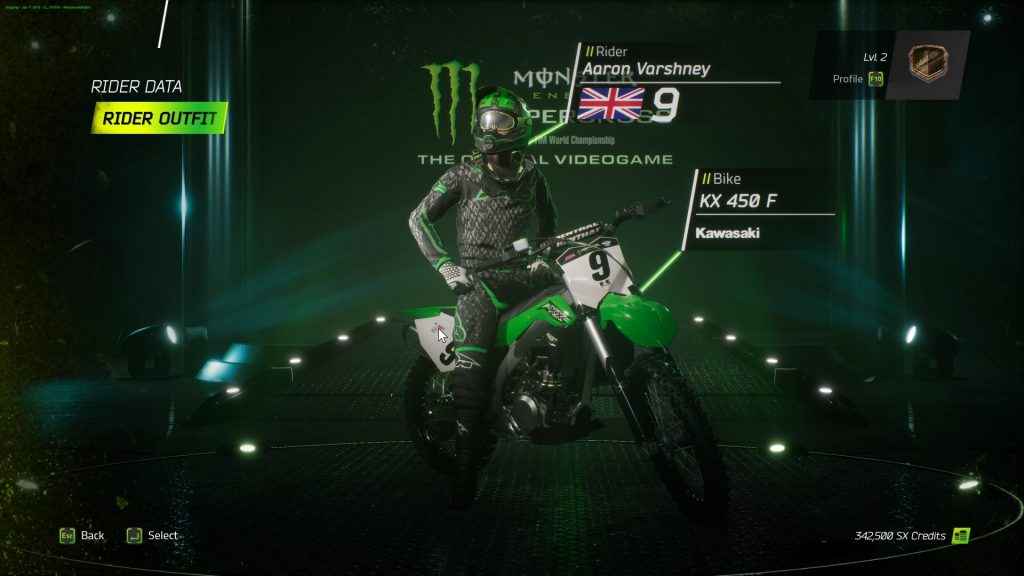 Monster Energy Supercross is a brand new licensed IP for Milestone, and the Italian studio has taken its experience with MotoGP and Valentino Rossi to the next level by incorporating stadiums, obstacles, and tight-knit racing. While their past experience is certainly not in the vein of off-road dirt bikes, what was on offer in the preview build was beyond my imagination.

Milestone is well known to incorporate a plethora of content in their games and they certainly don't skimp in the slightest here. While the choice of character faces are few and far between, the customizability – of, not just your avatar, but your bike – is phenomenal - essentially the bike is your new avatar.

When customising your character you can change your face with a few presets, the suit you wear, the boots, gloves, helmet, goggles, safety harness, and a nice touch of adding the butt patch that's very reminiscent of most bike racers. But, with the addition of adding the customizability of your bike, you now have the ability to change the handlebars, the bike's colour, look, handles, decals, and much more. It's an in-depth feature that will be one for the collectors.

The on-track action in Monster Energy Supercross is carnage. If a rider ahead falls down then you can expect a pileup, the initial first corner is an almost certain mound of people and bikes, but that just adds to the tension of wanting a good start to avoid such excursions.

Weaving and jumping over various obstacles is a challenge, especially with the way the game handles the bikes. It's far from easy, but that's where the fun lies. My initial impressions were realising that I just couldn't turn at all well, I struggled around the corners and could never catch up with the AI. Once told to manoeuvre the right analogue stick, I finally was able to make these tighter turns, as well as control, jumps better - I was essentially transferring weight on the bike. It makes a huge difference to the action on the track as well as balancing around corners and landing.

Even when learning how to turn properly, it was still a brutal game that even on the easiest setting I struggled against the AI, but with more practice, I was improving rapidly.

Unlike Gravel, Milestone’s other upcoming racing game, Monster Energy Supercross is set within the stadium in every race, the details have been souped up and the dirt on the track looks phenomenal. As each bike passes over the surface, the terrain seemingly lightly deforms to the tyres pushing at it. Whether this is geometry or textures, it looks splendid. But what blew me away wasn't the graphics, the racing, nor the customisability, but the track editor!

When I heard about a track editor being included I was expecting a basic grid based layout where creating the tracks would be a matter of 45 or 90-degree bends and a few jumps. What Milestone has accomplished provokes your creativity to come up with a highly customisable track layout that you can add a multitude of jumps and even bridges. You can take these created tracks and race against the AI and even upload it to the cloud so that others can download and play your track too, or perhaps you can play it with others in a multiplayer session.

Unfortunately in the preview build of Monster Energy Supercross there was no multiplayer and we could not test uploading the map, but we could save it locally to test against the AI. While there are areas where you can break the AI by setting up certain jumps, the overall experience and ease of creating your track is going to give this game oodles of longevity.

With a release date rapidly approaching on February 13, 2018, keep an eye out for our review of Monster Energy Supercross.