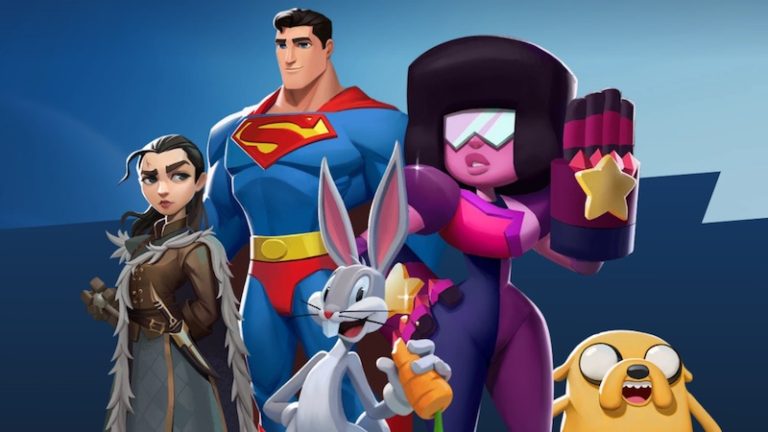 Multiversus Impressions (PS5) – Since Super Smash Bros. hit the Nintendo 64 back in 1999, a handful of developers took it upon themselves to create something equally special. Sony even attempted it with PlayStation All Stars, which didn’t exactly set tills alight with around 400,000 copies sold. Clearly, it takes more than big characters to make a game like this succeed.

Still, the gaming scene has changed a great deal since the days of the N64. The likes of Fortnite, Rogue Company, and Genshin Impact hold significant time slots on practically all devices out there.

On the surface, Multiverse presents itself much like what you expect from the Super Smash Bros. franchise: a bunch of different characters beating the hell out of each other King of The Hill-style. This presentation even comes down to the vibrant colors and animations used when combatants fall off the map. The intentions behind Multiversus are far from cloudy.

At the same time, WB’s collaboration of its properties takes what makes its IPs special and drops them all in a pot. Shaggy pelts people with a pastrami on rye, Tom flings a fishing line around the field, and Jake takes on the shape of a horse and runs through chumps. 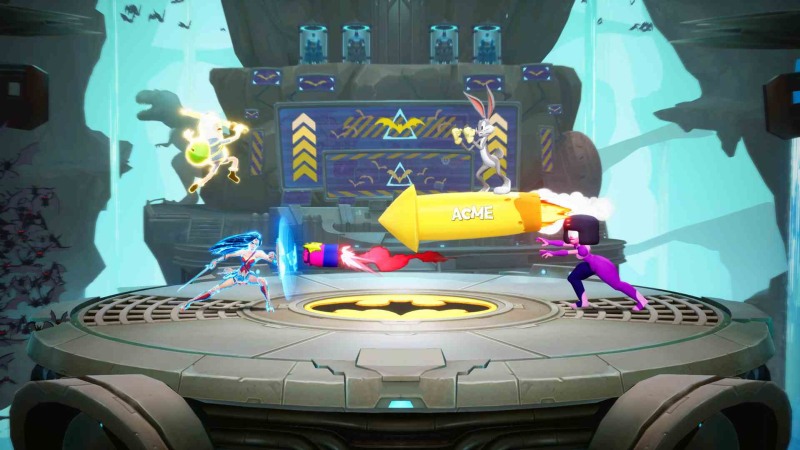 Also, character combinations play into the formula much more than I would have guessed! The Velma-Shaggy combination, after just one match against them, makes me perpetually nervous and consider quitting. They synergize so well between constantly healing and bolstering each other. By the time you get any damage in, they’re already knocking you out.

Keeping Balance In A Pool Of Very Different Universes

This skill has since been nerfed, with more reworking to come, but it still plays a significant role in gameplay. Equally so, everyone has a counter, even Taz. In that aspect, Multiversus succeeds. Combinations mix up all of the strengths and weaknesses for each character as well.

Balancing is still very much in the game’s future, but it’s only the beta. Several characters generally have advantages over most of the roster, like Iron Giant just because of his size and reach, but a little technique and practice can see you victorious with just about anyone. 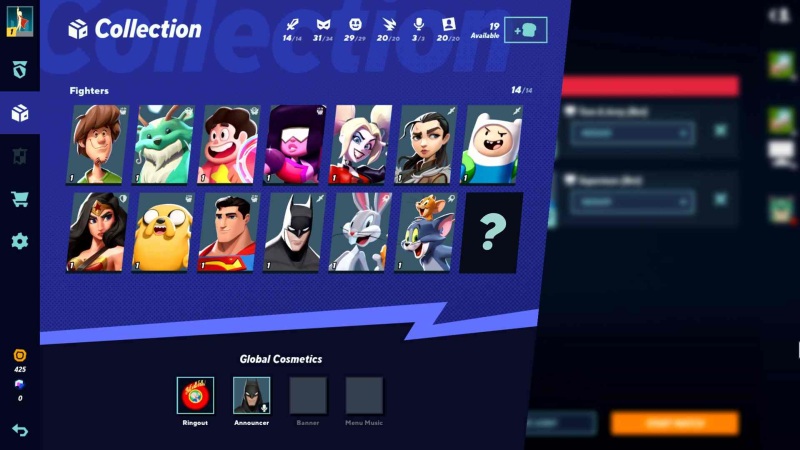 Taking Notes From Other Competitive Genres

Another aspect of Multiversus that you will undoubtedly recognize is the Battle Pass. It looks exactly like what you find in Fortnite. It also functions the same way, unlocking new skins, currencies, and banners as you level up.

Fortunately, these offerings don’t change the way you play the game or affect how well you play. These just help to make it easier to level your characters and make you look more flashy on the loading screen before each match. You know, the important things in life.

One thing that comes from the Battle Pass is Toast. Toast acts as a sort of in-game currency to “like” another player at the end of a match. It’s a goofy usage and play on words, but it works well in the cheeky atmosphere that Multiversus creates.

For free-to-play gamers, Multiverse follows the formula found in games like Rogue Company and cycles through different characters each week. It might take some time, but you can just wait until a character is in the free rotation to try it out before you unlock it permanently. 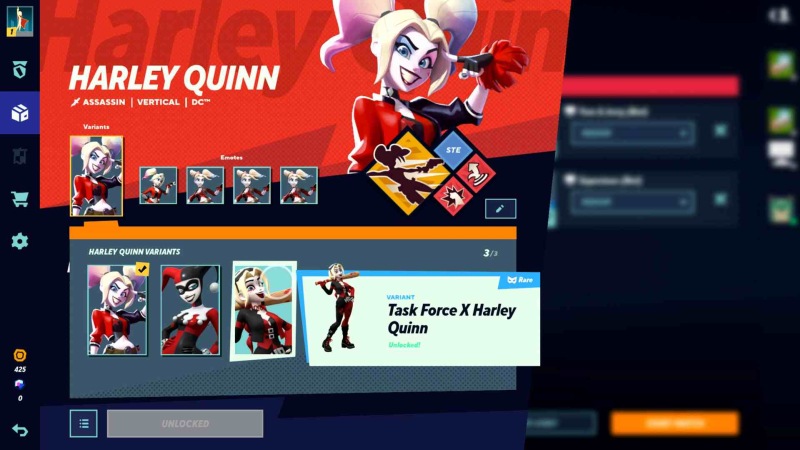 On that note, the general time it takes to unlock a character through free-to-play means, which excludes any benefits from the Battle Pass, is a little over a week of steady playtime. In the early days, that grind time is shorter due to the rewards that come from leveling up each character. Either way, unlocking new characters as a free-to-play gamer takes patience and understanding of a character before purchasing one.

Get Perks To Enhance Your Skills

As I alluded to above, each character levels up something called Mastery as you spend more time playing with them. They have their own unique cosmetic unlockables, but they also unlock beneficial perks that enhance their attacks and movements.

These are where the real game-changers come from, and everyone has to earn them. They cannot be unlocked with any currency. They don’t overhaul how characters play by any means, but they help make things a little easier. 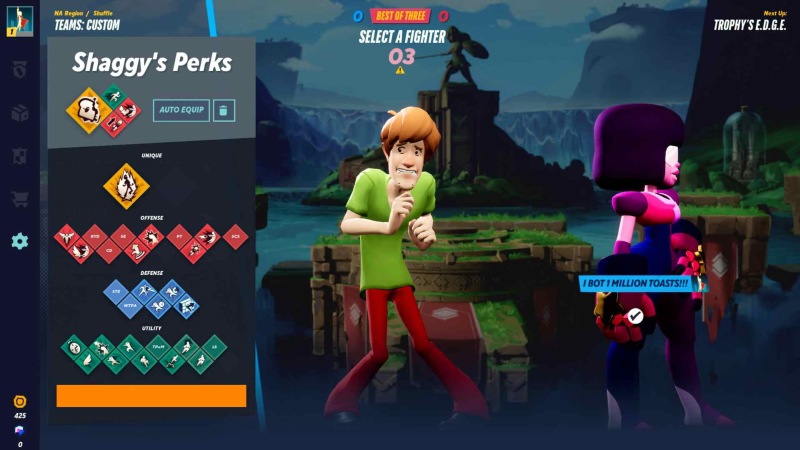 For instance, Harley Quinn unlocks a triple jump after you level her up. Without saying anything else, you already see the advantage of a third jump. Another example is Wonder Woman, who can activate her Signature Perk, which activates her shield when she dodges. Taz can get increased knockback, which is already strong.

You can also use gold to level up your perks after you reach Mastery 9 with that character. This is where the power creep comes in. You benefit heavily from exploring this part of your character if you plan to play it for any length of time.

A Real Hit of A Brawler

Multiversus is seething with personality. Each character brings to the game its own unique combat style, fun references, and goofy quirks. I’ll never forget how hard I laughed when I first heard Velma scream “Jinkies” as she flew off the map. It’s those kinds of things that keep the game fun, even when you get demolished by a skilled opponent.

With more and more characters announced, Multiversus has plenty of room to grow. Balancing is a bit of an issue right now, but there’s enough here to make any opponent approachable. I don’t tend to stick with competitive games for very long, but Multiversus stays in my mind all day everyday, and it keeps me coming back for more.