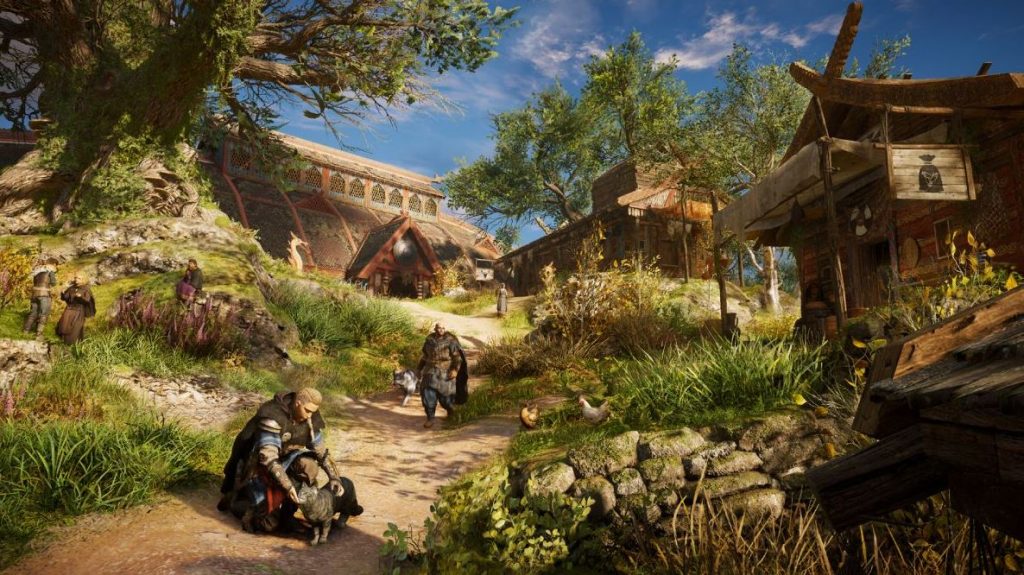 A chunk of new Assassin’s Creed Valhalla details has been revealed in previews for the game, mostly focusing on the game’s various towns, vendors, and the game’s settlement, Ravensthorpe, which grows over the course of your journey.

Ravensthorpe will be the game’s core settlement and you will help grow it from a shack in a clearing to a bustling community, filled with vendors, families, and cats and dogs to pet. But, the most important part is you get to choose which buildings to add and in what order. There is a room for Eivor and a War Table-style room where you can choose where to head next before riding out from your settlement. Raiding will then provide the resources needed to build more shacks and huts.

Other vendors include Rowan, who will sell you mounts and mount paint jobs. Mounts can also be trained to increase their stats, like their ability to leap or their endurance. Trading Posts allow you to purchase new resources and cosmetics like Tattoos, which there are apparently a lot of. There is also a building called the Hidden Ones bureau staffed by a proto-Assassin named Hytham and has a board of targets for you to find around the map and kill. All of this is in level one of your settlement.

Later levels will include a Hunter’s Hut for exchanging animal part, a fishing hut to catch aquatic species (yes there is fishing in the game), a tattooist, a shipyard, a brewery, a cartographer, a museum, a Seer’s hut, a graveyard, farms, and individual houses for key characters. There are also statues you can customise. The Seer’s hut will be where you will seemingly access the mythological elements of Valhalla.