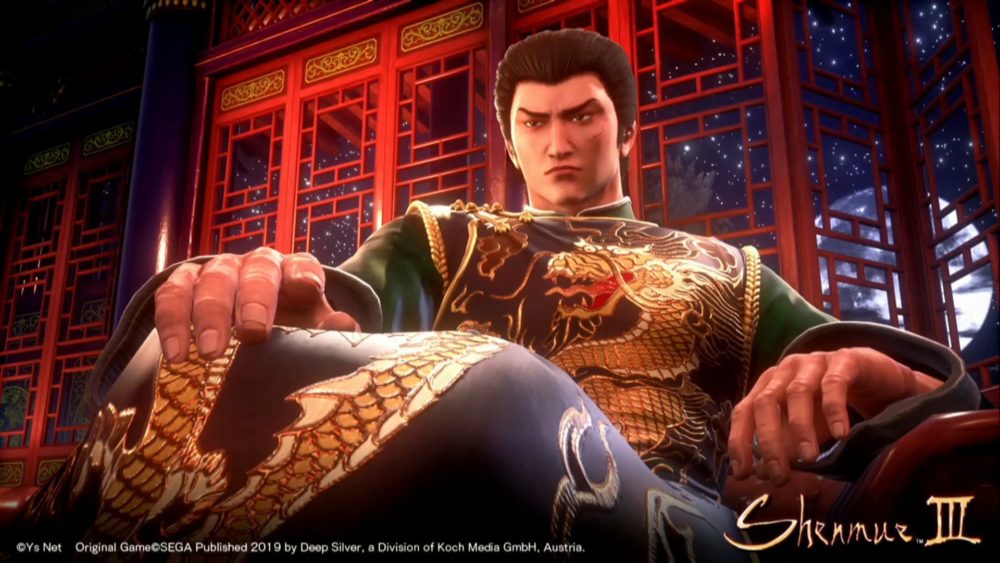 Ys Net boss Yu Suzuki has revealed a batch of new Shenmue 3 screenshots during the Japan Expo in Paris, offering a glimpse at some familiar faces in the upcoming martial arts-driven epic. In particular, we’re given a look at two major villains returning for the game, one of which is a bit surprising considering he was thought long-defeated in the first Shenmue.

There’s also a shot of an arcade, presumably confirming players will be able to try their luck at a handful of classic Sega games much like in the original Shenmue titles.

One of the characters seen in the latest Shenmue 3 screenshots is Lan Di, the enigmatic Chinese martial artist that murdered Ryo Hazuki’s father, Iwoa. Ryo has been attempting to track him down all this time, and came close during the events of Shenmue II. Will the pair finally face off this time? Fingers crossed.

The other character shown is Chai, who apparently didn’t take kindly to taking a beating from Ryo at the end of Shenmue, so he’s back for revenge. He’s a weird chap, almost Gollum-esque in his appearance and no-one really knows anything much about him, other than he’s obsessed with rising through the ranks of the Chi You Men.

Check out the new Shenmue 3 screenshots below. The highly anticipated sequel is scheduled for release on PlayStation 4 and PC on November 19.

Creator Yu Suzuki has been waiting over a decade to make Shenmue 3, with the series going on a lengthy hiatus following Shenmue II’s release. He finally got his wish in 2015, when Sony allowed Suzuki-san to launch the game on Kickstarter from its E3 2015 press conference. The game went on to raise over $7 million.

Shenmue launched on the Dreamcast in Japan back in 1999, and originally started out life on the Sega Saturn. The game coined its own genre, FREE (Full Reactive Eyes Entertainment), and sold 1.2 million copies worldwide.

Shenmue II followed in 2001, although it was only released on the Dreamcast in Europe and Japan due to the demise of the Dreamcast in the US. Instead, Sega ported the game Xbox for that region in 2002.