It doesn’t feel that long ago I was dreading how far the latest instalment of Pro Evolution Soccer would drag the series away from the core of what made it so bloody wonderful in the first place. The last console generation was the fall of a footballing giant, steadily declining whilst showing the odd glimmer of that old spark. Since the ‘experimental’ PES 2014 arrived however, sporting a new engine and more than a few teething problems, the series has risen from being an also-ran in the yearly title race with FIFA to being the champion-elect. In fact last year’s PES 2016 could really have kicked the twenty-year-long franchise into the stratosphere, but the immaculate outfield play was hampered by zen refereeing, greasy-palmed keepers and most regrettably of all, a disastrous fiasco regarding the roster update that cost the game a lot of the goodwill the fans and critics had built up for it.

The structure is there to rectify that with this year’s edition though, and from my time with PES 2017, I’m feeling confident that the whole package is already on the way to outstripping last year’s game. If 2016 was an almost Fernando Torres at Chelsea-esque arc of daft failure marring the undeniable quality, then PES 2017 could be the series’ Luis Suarez at Barcelona, swatting away previous misdemeanours to become one of the best, but never without that concern that something reckless could still occur.

The early version of PES 2017 we playtested consisted of just the four teams (I was assured the playable demo out nearer release would be something a bit more substantial this year) to choose from in a Regular or Superstar difficulty exhibition match. Two club teams in Champions League Finalists Atletico Madrid and a newly-licensed Arsenal were available to select from and two international sides in France and the World Champions Germany. Four sides diverse enough tactically-speaking to get a decent grip on this year’s changes. Naturally, as the majority of my time with PES 2016 has been with Arsenal, I started as the Gunners against Atletico.

The first thing that struck me was the obvious graphical improvements and overall presentation. The stadium under the lights on a clear summer’s night looked beautiful, making great use of the FOX Engine’s impressive lighting. It straight away had that atmosphere of an evening kick off nailed down, I can already imagine how effective that’ll be for the Champions League matches going forward. Player models are a step up also, the magnificence of Olivier Giroud’s suave hairdo and neatly-trimmed beard are almost fully-realised, while Paul Pogba’s bog brush zebra of a barnet looks so good I almost forgot how bloody awful it actually is as an actual hairstyle.

The way players move has had a similar upgrade, with even more of the players being visibly distinct just by watching the way they move from a distance. I could spot Theo Walcott’s signature half-hearted dash for a stray pass with just a glance at the screen. There’s an aroma of hot, buttery-smoothness to the overall play that wasn’t entirely there last year, and even at this early stage, PES 2017 in undeniably a better-looking game by far. Amusingly, there was the odd animation glitch that saw players fall in some eye-wateringly painful positions that no man, nor woman, should be able to bend. Still, there’s plenty of time to fix that happening so often, but in a way, I’ll still enjoy their weird, excruciating contortions if they show up in the final build. 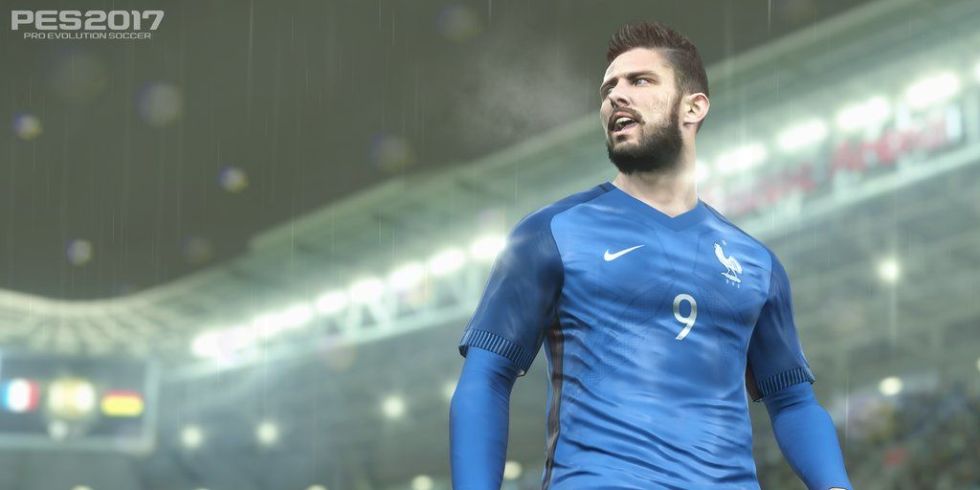 The presentation has received a much-needed facelift as well. Menus are still a bit plain in some places, but there’s a more rounded, design to them that finally does away with the underwhelming static grey boxes in certain places. During matches the small touches all add up nicely. The slight zoom out of the camera upon kick-off, the revised replay system that takes on a more televisual style, the snazzy triangle-patterned transition ident and plenty more help give PES 2017’s front end more of a personality.

From the kick off it was also quickly apparent that the already-solid passing of 2016 has been tweaked further to produce an even more responsive upgrade this time round. It keeps the pace of the game a bit quicker, and thus, a bit more engaging for the player. Soon after that I discovered the next big change.

I chased down a loose ball near the opposition penalty area and clattered into the defender, hoping to barge my way to goal like I have so many times before in PES 2016 and the referee blew for a foul against Giroud. I’d barely clipped the defender, but it was enough to be considered a foul. Throughout the day, fouls seem far more consistent than the previous two editions, the little nips and barges registered as fouls more often, but the referee tended to go easy on the cards in these situations, only saving them for persistent offenders and the more sloppy/cynical hacking. This is a blessed relief, having this consistency creates far less frustration than the warped systems of 2015’s Red Card Bonanza and 2016’s blurry-eyed officiating. Of course there are still questionable decisions now and again, but it’s rarely as comically wrong as it could be in recent years.