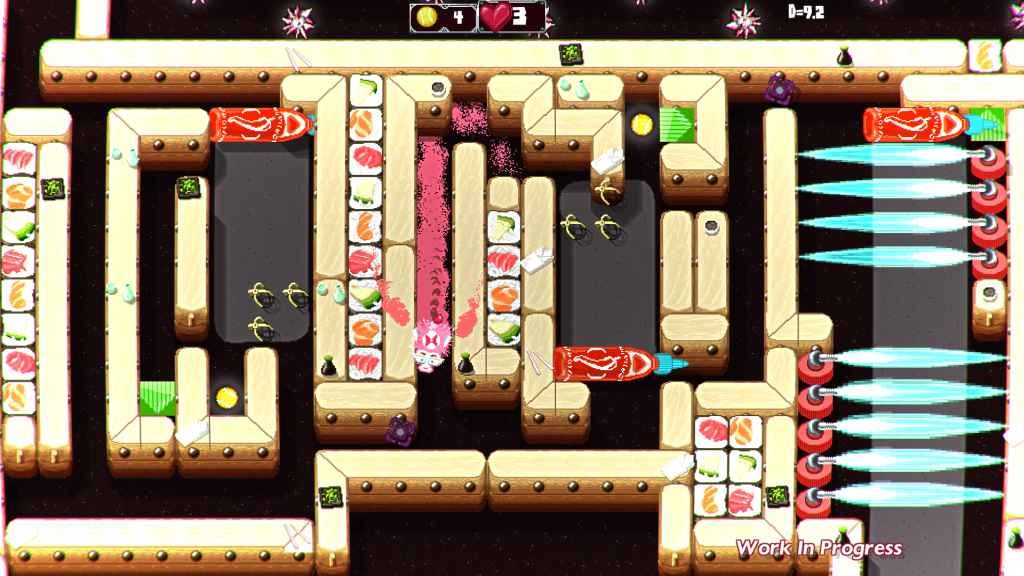 Mommy’s Best Games, the indie development company behind such titles as Serious Sam Double D XXL, Shoot 1UP, and something called “Finger Derpy” recently announced via Twitter that Pig Eat Ball, its latest mind-bendingly strange title, will release on October 18 for all major consoles.

Playing as the titular pig, players are tasked with meandering around levels, vacuuming up balls and solving puzzles. The twist is, the more balls the pig sucks up, the larger it becomes. As the various levels require the pig to squeeze through some fairly tight spaces, the pig must then vomit the balls back up, sending them bouncing around the environment like little half-digested-slops missiles.

I know, I know, it sounds gross, but somehow head developer Nathan Fouts has found a way to keep Pig Eat Ball from even remotely resembling “potty humor”. Through some magical alchemy, Fouts has mixed such strange and bizarre imagery in Pig Eat Ball that the vomiting pig actually seems like a perfectly okay thing.

I played a bit of Pig Eat Ball on Steam last year, and was hugely surprised by how much fun I had. I don’t want to go on and on, but suffice it to say that I found the game to be surprisingly charming and engaging for a game about a pig princess chomping down balls and then barfing them back up.

“King Cake, the dessert-headed monarch, has decided it’s time for his daughter to get married, but she other plans! The King has devised “The Royal Games” in which the winner will marry Princess Bow. Since she can’t talk her father out of it, Bow decides to put on a disguise and enter the competition herself. Along the way, she discovers a nefarious plot that threatens all life aboard the Space Station Kingdom. Can she get to the bottom of things before it’s too late… and win the Royal Games at the same time?”

With a rollicking soundtrack, clever and rewarding puzzles, and great arcade-y gameplay, Pig Eat Ball is definitely a game to keep an eye on. I’m guessing that with the extremely dead fall game season upon us, there probably aren’t very many games that readers are looking forward to over the next couple of months. Keep an eye on Pig Eat Ball, it may just get you through the annual winter gaming dry spell.