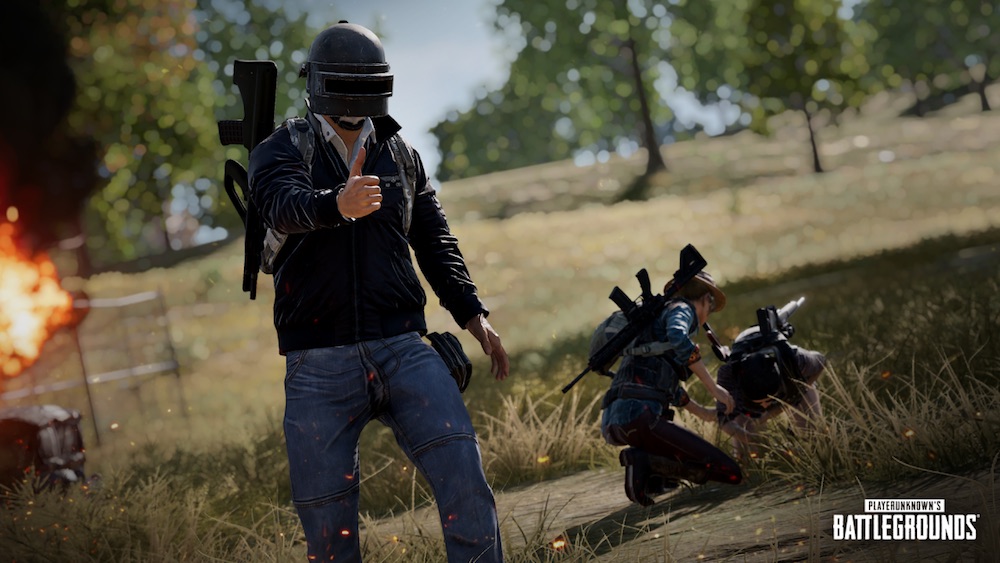 The PUBG update 1.60 patch notes have been confirmed for PS4 and Xbox One versions of the game, which arrives with extensive new content including a fresh vehicle in the shape of the Coupe RB and a new Reputation System.

Read up on the PUBG patch notes below.

Are you ready for the new PGI.S? The PUBG Global Invitational.S sets teams from around the world against each other in a week-long tournament. Teams will battle for placements in weekly tournaments and rack up prize money as the overall tournament goes on. There’s a new Pick’em Challenge available as well, giving you a chance to earn sweet PGI.S gear for predicting the winners. This will be a tournament unlike any other, so tune in, pick’em, and win!

There’s a new roadrunner in town. Introducing the Coupe RB, a vintage sports car with a blazing top speed of 150 km/h, making it second (on land) in speed only to the Motorbike. The Coupe RB won’t carry your whole squad, but it will get you to where you need to go fast. Try out the Coupe RB on Erangel, Miramar, and Sanhok!

Keeping in-game interactions healthy is important to us. We know passions can run high on the Battlegrounds, but toxic behaviour is never justified. To help keep things more civil while you kill each other, we’re introducing a new Reputation System to PUBG. This system will assign you a Reputation Level from 0-5 depending on how you treat your fellow players. Your Reputation Level will be displayed in the Team Finder, giving players searching for a group an idea of what kind of teammate you’ll be. Your Reputation Level will naturally increase as you play games, as long as you are not exhibiting toxic or otherwise disruptive behaviour. We hope this helps everyone have a better time on the Battlegrounds!

New reputation level will be displayed next to the players IGN.

Reputation level is affected by the following:

We’re updating Ranked Mode penalties to allow for a certain amount of safe time if your team never fully formed. You can check out all the details around the system and how it works below.

Leaver penalties should be waived for players who leave within 5 minutes after the plane takes off if the player:

If a player qualifies to have their leaver penalty waived, then the match is considered to be competitively invalid for that player. This means:

Only available in TPP.

For the first Arena Mode, we received feedback that players with the default P1911 pistol did not stand a chance against players with purchased weapons. As such, we’ve replaced it with the P18C, which comes with an auto-fire mode.

Adjusted the amount of ammo given when purchasing a weapon.

Increased helmet price, which is now higher than the vest.

Starting from Round Four, weapons purchased from the loadout store will include attachments.

Players on a winning streak will earn bonus rewards accordingly and the teams who don’t lose any chances before the final round will be rewarded with an upgraded loadout store which has the following items:

Special consumables like Adrenaline Syringe and the First Aid Kits.

Pistols and shotguns can now be found under the same category.

Reduced end of round points earned (both win/lose).

Since squads with fewer players are at a disadvantage, they will earn more kill points depending on their squad size.

Considering player feedback on how hard it is to win the next round after losing your items upon defeat, you’ll now get a small bonus to help you rebuy the gear you need.

To help reduce confusion during combat, we’re disabling kill feed messages from the other arenas, so now only events within your current arena will be shown.

There were quite a few players leaving the game after losing their first chance, thinking the game was over. We’ve added a message to let players know they’re still in it!

When starting a new round, map features such as zoom option and markers will revert to default.

Addition of the reporting system

Players in spectate mode can now report other players for cheating or behaviour that goes against our Rules of Conduct.

And you thought flips were cool. Now you can trigger random stunts while mid-air on the Dirt Bike to really style on your enemies. There are a total of 6 new stunts available and best of all, they’re easy to perform. Simply hold down the L3 while in the air on a Dirt Bike and watch how cool you are.

New Stunt emotes exclusive for a dirt bike has been added.

The Stunt Emotes are triggerable only mid-air on a Dirt bike – and when the player is not about to hit something.

Please note that the Horn functionality has been replaced with the Stunt Emotes for the Dirt Bike.

The reload animations adjustments are a follow-up to the Balance tweaks to the 556 guns in the 9.2 November update.

To maximize PUBG’s strategy and the core fun of the Battle Royale, we continue to make improvements, including reducing the steps of unnecessary controls in console PUBG gameplay. The ‘Auto Attachment Options’, ‘Controller Preset C’ and ‘Custom Key Binding’, which were updated in the past, are good examples. We hope that the ‘Inventory Improvement’ will also be an update that will satisfy the survivors.

Of course, we don’t want this change to give a negative impact on the UX experience that has already been learned, but to improve the inconveniences. Please, continue to send us your feedback!

You can navigate around the inventory from right to left and top to bottom with the D-pad and R-stick.

(Tap) R-stick will function the same and the select(A) key.

You can quickly adjust the number of items you wish to pick-up/drop by using the R-stick.

Swapping from main weapon 1 to 2 can easily be done by selecting the new ‘Weapon slot change’ key.

Displays all attachment slots regardless of weapon type, and intuitively displays the availability of specific slots.

Button guides are displayed at the bottom of the inventory in the same location and content.

The tool-tip visuals have been improved to enable intuitive information recognition.

L-stick/D-pad can move the selection on the menu.

Pressing button A can enter a menu(news, notification, system menu)

Pressing the Option button/button B closes the called menu

When acquiring an item or a currency from out-game event etc. will toggle a notification.

The time displayed in Stadia’s Notification System is not the player’s local time, but Stadia’s machine local time.

A message will be shown on the notification centre in case of item or currency is soon to be expired.

New ‘move to store’ button has been added when browsing empty item category in customize tab.

Optimized hitching and fps drops occurred when loading maps (when entering and manoeuvring the world).

Reduced the hitch occurred when updating a character.

Fixed the issue where some pass missions could not be accomplished in Haven.

Fixed the foliage clipping through a vehicle while in FPP mode in certain maps.

Fixed the case where character’s body equipping a ghillie suit could be invisible to others.

Fixed the issue where players could change perspective to TPP when spectating other players in FPP game mode.

Fixed the awkward POV when viewing a kill cam of a character equipped with a ghillie suit.

Fixed the issue where the deaths in Blue Zones were recorded as suicides.

Fixed the issue where the two characters collide after going prone in a moving ferry, they receive fall damage.

Fixed the issue where the headshots were not reflected in the Career page.

Fixed the issue where the AI pillar guard positions are rendered in wrong locations.

Fixed the store issue where it only displays the loading screen after purchasing an item or requires a long loading time for the item popup to be displayed.

Fixed the issue where the completed missions were displayed in the System Menu’s Mission List.

Fixed the issue where sending a cross-platform invite to another player in a custom match causes abnormal behaviour.

Fixed the issue where players are able to use the emergency parachutes while in a DBNO state when falling from non-fatal heights.

Fixed the issue where certain bots would constantly walk around.

Fixed the issue where “Enemy Spotted” ping would function while navigating through the inventory when it is bound to the RB/LB buttons using the custom key binding feature.

Fixed the issue where the message ‘Invalid Season’ is displayed when checking out the profile of an invited friend.

Fixed the issue where you cannot navigate either GNB, LNB after pressing the Options button two consecutive times.

Fixed the issue where the character’s wrist is bent too much when equipped with certain weapons in preview.

Fixed the unclear sound of UMP45 if another player is firing from a distance.

Fixed the duplicate click sound played when clicking on the preview button in the customize screen.

Fixed the issue where players could clip through a certain building in Abbey, Vikendi.

Fixed the issue where enlarging the minimap while flying in the helicopter, makes the minimap glitch.

Fixed the issue where the last Blue Zone was set as a non-playable area in Haven.

Fixed the issue where the vehicles collided with the land when driving over low hills.

Fixed the issue where it was hard or impossible to enter certain buildings in Georgopol of Erangel.

Fixed the issue where inappropriate RP changes were displayed in the match history section during placement matches.

Fixed the issue where starting plane’s seat UI were sometimes displayed as empty.

Fixed the issue where some pages of the store page not loaded when entering store page after restarting a lobby.

Fixed the issue where profiles of players located in ‘Unassigned’ ‘Observer’ section of custom match session cannot be loaded.

Fixed the issue where centre pointer not displayed in replays.

Fixed the issue where the earned/lost RP was displayed in the Match History in Ranked.

Fixed the issue where the currency and system UI are not displayed when returning after completing the TDM.

Fixed the issue where the visor of Mad’s Motorcycle – Helmet (Level 1) is not displayed when equipped by a male character.

Fixed the issue where the nose of Killer Clown Mask could clip through when equipping face-covering helmet items.

Fixed the issue of the clipping issue when Gas masks and Helmet skins are equipped at the same time.