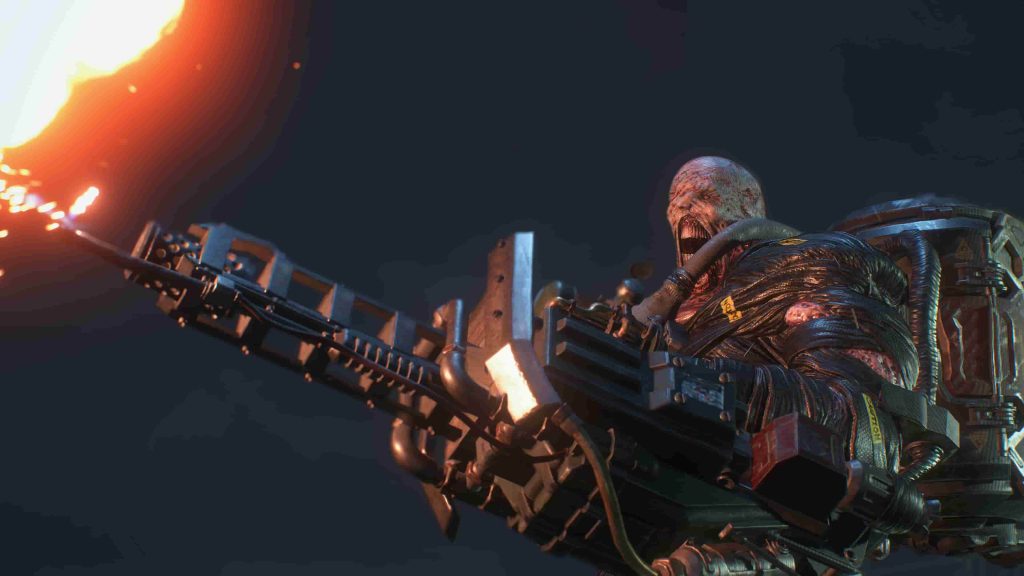 Let’s face it – Capcom was always going to remake Resident Evil 3: Nemesis. The game is intrinsically linked to Resident Evil 2 in terms of setting and time frame, taking place 24 hours before and after Leon and Claire’s zombie-busting antics in Raccoon City.

You couldn’t have one game remade without the other. In many ways, they’re both one side of the same coin, so to speak.

Our hands-on session with Resident Evil 3 kicks off as heroine Jill Valentine exits a Subway station and onto the chaotic streets of Raccoon City’s downtown area. Almost immediately, I was impressed with how Capcom has managed to sell the setting. Simply put, Raccoon City has never looked more beautiful in all its bloodstained carnage.

Wrecked cars litter the streets, bodies are strewn about the place, shops are ransacked, and police radios emit static punctuated by panic-striken voices. In the distance, gunshots and screams fill the night air; the atmosphere is superb, and you really feel like you are trapped in a city slowly on the brink of collapse.

Jill’s objective is to power up the subway car so she and the surviving Umbrella Biohazard Countermeasure Service members – including Carlos Oliveira and Mikhail Victor – can escape the area. To do this, we need to acquire a couple of key items (nothing which we’re going to mention here, naturally) to access deeper into the streets.

One of the first things I notice is that, while Resident Evil 3 plays very similar to the remake of the second game, there’s a few new wrinkles. You can now dodge by hitting R1 and X in the desired direction, which really helps you out in a pinch if you time it right (pleasingly you can’t just spam the move and evade everything – it requires timing).

Armed with a standard pistol (although I later grab a Shotgun and Grenade Launcher), I venture through bloodstained streets and wrecked shops, methodically dispatching zombies and soaking up the chilling atmosphere. The shooting feels just as solid as it was in RE2 remake and functions in the exact same manner, although you’ll still need to save ammo where required as it runs dry pretty quick.

Like its predecessor, RE3 incorporates ammo mixing with gun powder, so you’re able to cobble together various bullets depending on the type of gun powder you acquire. Typewriters and save rooms also return, complete with the familiar tune present in the original, albeit with a little twist. It oozes nostalgia while still remaining fresh – a testament to Capcom’s ability to cater to both new and old players.

Eventually, we progress through the war-torn streets and into a power station, where we’re set upon by a familiar foe – the Drain Deimos. These insect-like creatures are pretty nimble and cause us more than a few headaches as we have to restore power to the area, requiring some dexterous finger work to eliminate them. They look fantastic too, and skitter around like giant arachnids on the ceilings and grime-ridden floors.

The biggest baddie by far is Nemesis himself, who pops up and proceeds to batter us senseless after busting through a wall. He’s not armed, but his meaty fists are more than enough to give us a few ‘You Are Dead’ screens. Unlike RE2’s Mr. X, Nemesis can move at blindingly fast speeds, and is capable of leaping great distances and knocking unsuspecting zombies out of the way if they happen to be in his path. Nemmy is also able to use a tentacle-like appendage to snag us from afar, so running away isn’t necessarily going to win the day.

You can knock him down to his knees, but eventually he’ll get back up again, ready to resume the chase. Make no mistake: this incarnation of the S.T.A.R.S killer is the most brutal and fearsome yet, and he looks fantastic – wonky nose and all. At this point it’s too early to tell if his appearances are scripted or more dynamic; however, from what I’ve seen, he makes Mr. X look like Scrappy-Doo.

Once power was restored, I had to tackle a classic Resi riddle to get the subway car’s route in place, and I also noticed a couple of other puzzles that put a different spin on some of the original game’s brain-teasers. Much like the RE2 Remake, this latest outing is clearly looking to keep veteran fans guessing, with not so much as a whiff of a copy and paste conundrum in sight. Brilliant.

Elsewhere, I noticed a couple of cool nods to the classic games. Haunting chimes of ‘City of Ruin’ from the original soundtrack could be heard in the streets, and the Donut shop played the thumping bass and guitar licks of Resident Evil 2’s B scenario credits theme over the PA, much to my utter delight.

Eventually, I venture down into the sewers after attempting to lead Nemesis away from the Subway and its occupants, which brings us up against perhaps the biggest surprise of the hands-on – Hunter Gammas. These frog-like creatures were in the original game, but here they’ve been completely revamped. They’re roughly twice as big, and have huge mouths capable of swallowing Jill in a single bite.

The Hunters stalk us through the sewers as we have to figure out yet another conundrum to exit the area, recalling those classic tense, claustrophobic Resi moments. Once we make our escape, Nemesis attacks again, and… that’s a wrap. Our demo ends, and left us more than impressed.

The biggest compliment I can give Resi 3 so far is that I couldn’t recognize much of the areas and story beats from the original game. The basic premise was there, yes, but everything had been given a refreshing shot in the arm. Clearly, this is more of a reinvention than a remake, and one that’s shaping up in spine-chillingly good form.

Outside of playing the Resi 3 campaign, I also got to test drive Resident Evil Resistance, the multiplayer-based side offering that comes with every copy of the remake. I played on the Casino map, which is depicted as you would imagine; a maze of slot machines, gambling tables, vibrant colours, and tight corridors.

I got to step into the Mastermind’s shoes during my hands-on, plumping for wrinkly Resident Evil overlord, Ozwell E. Spencer. His trademark ability is a massive red laser wall that stops anyone in its tracks — ideal for blocking key items and exits. While there’s a lot of micromanagement to be had that’s a bit overwhelming at first, playing the Mastermind is great fun once you get he hand of things.

You’re able to view cameras of each room (providing they haven’t been hacked by a survivor) and plan ahead, planting all manner of traps and T-Virus critters at key choke points and areas where you think survivors are going to go. Tight corridor ahead? Shove a mine there. Need some damage done? Throw down a couple of zombies or infected dogs. Hell, you can even hit up one of the cameras and install a machine gun or rifle and gun down the survivors as they tumble into view.

Survivors also have certain abilities depending on who you choose. I went for Tyrone, the tank of the group who is able to deliver a meaty kick when things get tough. However, everyone plays their part, and teamwork is paramount if you’re going to hunt down the key items in each area, solve the puzzle, and make it to the next round.

After taking a battering, I switched to the hilariously-named Martin Sandwich (Resi aficionados will get the reference), who is more of a passive character, able to plant flash bombs of sorts to disorientate foes.

Things can get pretty tense when you have a Mastermind who is able to unleash something like Mr. X or Birkin on the group, forcing you to work together to take it down or risk being picked off one by one.

You also have to carefully think about how to spend Umbrella credits, which are used at item boxes at the start of each round. There’s healing items, ammo, firearms, grenades, and other stuff available, but you need to think about what’s best for your character and prioritize items.

Resident Evil Resistance definitely feels like the most successful multiplayer-focused Resi title to date, and despite some frame rate hiccups and instances where things get a little bit messy on screen with so much going on, it was an enjoyable and – dare I say it strategically rewarding experience.

Resident Evil 3 is released on April 3 for PS4, PC, and Xbox One.