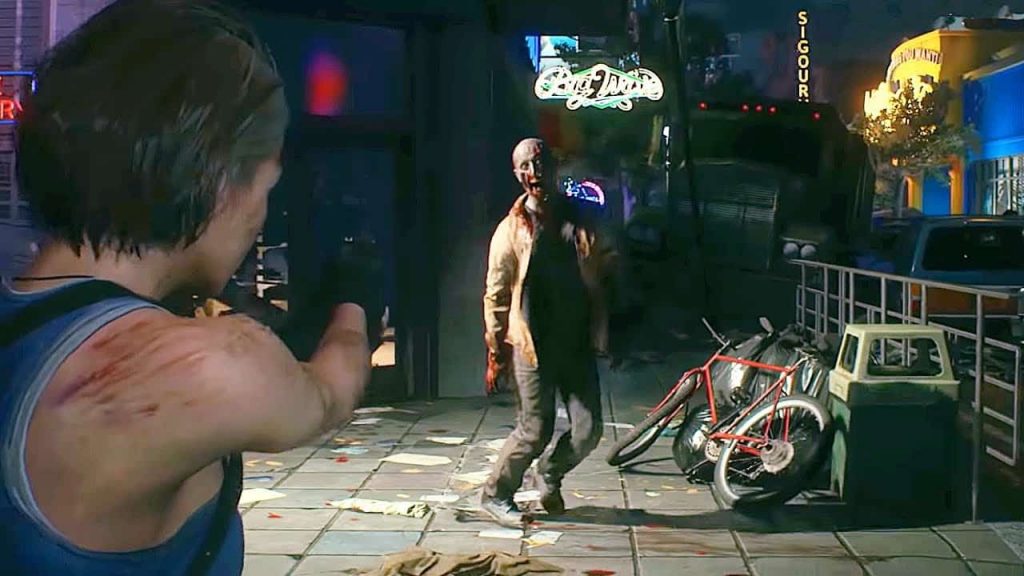 Want to survive Resident Evil 3 remake? Then you’ll need some serious firepower. Sure, ex-S.T.A.R.S. member Jill Valentine is as tough as they come, but being stalked by a seemingly invincible bio-weapon really complicates matters; she’ll need more than a basic handgun to make it through Raccoon City alive.

Fortunately, we’ve got our grubby mitts on every weapon in the game and their accompanying upgrades, so be sure to follow our Resident Evil 3 weapons location guide and you’ll be splattering zombie brains across the walls in no time!

The first weapon part in the game is for your standard handgun, and enhances the aiming capabilities of the firearm. It’s found in the safe in Downtown in the storeroom where you’ll also find the journal. See our guide for the code.

What’s a zombie apocalypse without a Shotgun? Exactly. Jill can find this in Downtown, in the Subway Office’s second room in wall cabinet that’s been padlocked. You’ll need the bolt cutters to retrieve it.

At Redstone Street Station, the weapon part is located in the gem puzzle next to the statue of the Clock Tower. You’ll need to insert two gems into the mechanism so it’ll give you access to the Tactical Stock. This steadies the aim of the Shotgun so that you are able to fire a little faster with reduced recoil.

This can only be obtained from the Nemesis, during your encounter after the Power Station section of the game with the Drain Deimos. As soon as he smashes through the wall, hit him with a grenade or a powerful weapon to get him to his knees. He’ll drop a case which contains the weapon part, allowing your handgun to hold more rounds.

Once again, you’ll have to fight off the Nemesis to obtain this weapon part. After he spawns on your way to the Subway Station, dispatch him a second time and he’ll drop another case containing the Moderator.

The Grenade Launcher is found in the safe room in the sewer area, not long after you first enter the area. Take the right-hand path when you are given the option, and go up the ladder to find the room in question. The Grenade Launcher holds four types of ammo: Acid, Explosive, Flame, and Mine Rounds.

This one’s easy. The upgrade is located in Gun Shop Kendo on a shelf, much like Leon’s upgrade was in Resident Evil 2 remake.

Once you’re in control of Carlos, head to the waiting room on the first floor of the RPD (opposite the shutter that you go through in Resident Evil 2). There, you’ll find a case on the bench that requires a S.T.A.R.S. ID card to open, so use the one you got from Brad Vickers’ corpse to open it and retrieve the scope.

This is again only obtainable when playing as Carlos, and can be found in the courtyard of the hospital on the first floor. To get to it, jump down from the second floor over the first balcony you come to, and you’ll find it on the floor.

This will be waiting for Jill once she regains consciousness in the hospital after contracting the T-Virus. It’s found on the desk, and allows the user to fire three shots in quick succession.

The final weapon in the campaign, the Magnum is one of the most powerful handguns in any Resident Evil game, and the Lightning Hawk is no exception. When you regain control of Jill in the hospital, head back to the 2nd floor and you’ll be able to squeeze through some rubble that Carlos was unable to do earlier. Once you’re through, you can jump down into the 1F courtyard and locate this powerful weapon in the metal case.

This can be found in the Umbrella underground storage area, before venturing down into the labs during your fuse hunt. It’s just after you find the Charlie Doll on the shelf after squeezing through the gap, and can be found by operating a lift panel allowing you to cross over a large gap and snag the Shell Holder in a box.

The final upgrade in the game is for your Magnum. Jill can find this in the surveillance room where Nicholai was watching over you, after collecting all three fuses and riding the elevator up. It’s found in the box next to the window.