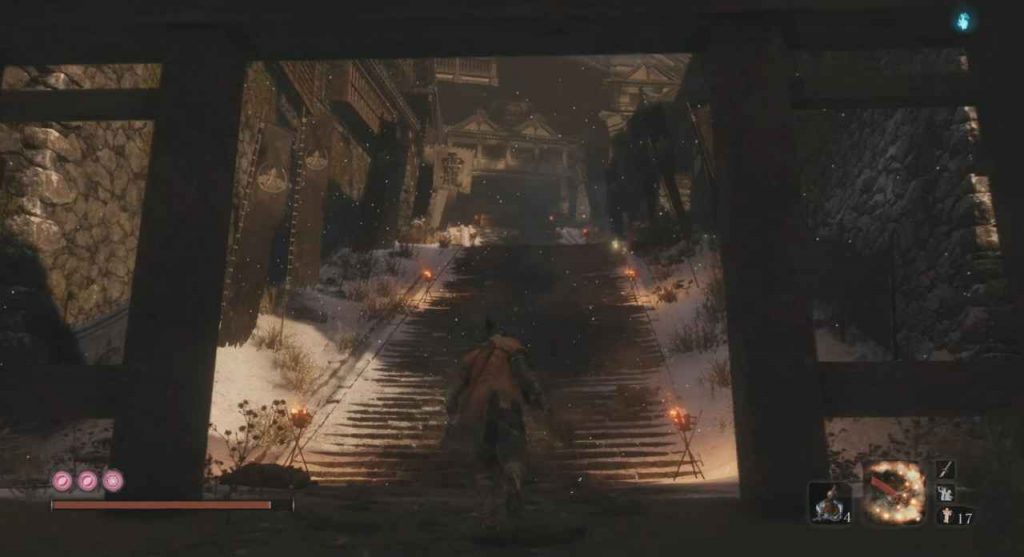 After completing the Ashina Depths area, the Ashina Castle will have changed quite a bit. You will not be able to travel to any of the Idols apart from the Abandoned Dungeon Entrance. This walkthrough will show you all of the items, enemies and every hidden secret in Sekiro: Shadows Die Twice.

From this Idol you can head back around to the start of the Ashina Castle. On your way out you will see an enemy sitting down. Kill him and jump over the gate ahead. You can face off against the bell enemy and three wolves; however, it is more hassle than it is worth.

If you hop over the gate and onto the bridge you will notice that an enemy comes out chasing one of the grunts from earlier in the game. Well, it turns out Ashina Castle has been invaded by the Shinobi.

The Shinobi are tough fighters, who relentlessly attack with their swords. Therefore, engaging in combat with more than one of them is not advised. You are introduced to them fairly easily though. You will want to deflect the majority of their attacks. Only attack when they finish combos or after they perform their jumping attack, which you can dodge. Their Perilous thrusting attack can also be dodged by stepping sideways.

If you head through the next set of Gates you can speak to another grunt and pick-up some Pellets behind him. The bridge from earlier is no longer there. Therefore, we will need to head down to the Ashina Reservoir Idol. Take a right after heading back out the gate, hop down and go straight ahead until you reach the Idol. Rest to reactivate it. Now, head up behind the Idol and head down the left path. You now have the ability to swim underwater; so, hop in the water and swim under. Head through the opening and follow the path around. On the right, you can find a Treasure Carp Scale. Head back up to where you jumped into the water.

Head back inside the building and head out the other door. Outside you can find another grunt and another Shinobi. Head back to the bottom of the stairs and activate the Sculptor’s Idol on your right.

We are going to take the right path before we head up ahead. If you grapple up to the small wall and then the roof above, you will avoid the enemies noticing you. Jump down onto the enemies below and kill the couple of them in this section. After you kill them, you will be ambushed by another Shinobi. After killing him, head to the tree on the right and pick-up some Oil. In the back corner, you can find some Black Gunpowder. To the left, in the middle of the area, you can find three more grunts.

Hop onto the roof ahead and grapple up to the building above. On this building, at the top, you can find another troll to kill. Up here is some Scrap Magnetite. If you look across to the roof in the middle of the area, you can find five more trolls. You can kill them, but they don’t give you anything. The goal will be to grapple up to the rooftop above. Firstly, we will go back to the main path. Along here you can pick-up some oil and talk to a man on the ground.

At the top of the stairs, you can find three more Shinobi. Through the door at the bottom of the tower is some Adamantite Scrap and some Oil. The door ahead is locked.

Now, head back to the top of the right tower and grapple up to the rooftop above. Across this rooftop, you can find one of the purple-armored enemies. He will whistle for a wolf as the fight starts. The goal here is to whittle down his health a little as he is recovering from attacks.

Around this corner, you can find a bunch more of those enemies. Jump across and loop around the buildings, killing the wolves up on the far left one. Run back to the rooftop where you fought the first enemy and kill the one who is following you. Finally, head up to the back left building and stealth kill the enemy.

Beneath you, you can find two more enemies patrolling. Kill the first one with a jumping deathblow and then kill the other one in combat. Watch out for the two wolves. Drop down to the lower level and pick-up the Antidote Powder on the floor. Now head through the window at the end of that balcony and reactivate the Sculptor’s Idol.

From the Idol, hug the wall in front and kill the enemy as he comes around the corner. Just outside the door, you will see one of the purple enemies standing on the bridge. You can sneak next to the railing on the right and get a stealth kill on him from behind. Ignore the room ahead. Instead, go into the room on the right to find one more purple-armored enemy, as well as two enemies with Katanas. You can get these enemies to attack each other doing some of the work for you. When that has finished, kill the last one.

If you grapple up to the ceiling and head along the path you can pick-up some Pellets. In this room, you can find a grunt which you can jump on. Behind you is a woman you should kill before taking on the Katana enemy. Around the corner, you can find two more Katana enemies.

Break down the paper wall next to them. If you head down the stairs, walk forward until the enemy starts fighting the Moonjar enemy. Once he defeats him, head back up and wait for him to return to his original position. From there, you can sneak up behind him and kill him. At the end of the corridor, go upstairs and talk to Ishiin. To the left, on the balcony, you can collect a Black Scroll from the chest.

Head back to the room where you killed the two katana enemies and head up the stairs. You can find some Adamantite Scrap. Reactivate the Idol. Before heading forward, we are going to go back down a floor and jump into the gap in the middle. Grapple to the beam and shimmy along until you are above the Ogre below. Perform a falling Deathblow on him to make this fight easier. Fighting him in this room is a bit of pain, due to how cramped it is. Nevertheless, use the same tactics as before. You will mostly have to dodge his attacks in this fight and get some hits in as he is recovering. Once he is dead, you will get a Prayer Bead and the Shinobi Medicine Rank 3 skill, which will increase the amount of health healing items restore.

Open up the door to the front of the tower, pick up the Adamantite Scrap on the centre altar, and then head out the back.

We are going to head across the bridge to the left first. Here you can find another grunt and another purple-armored enemy. On the bridge, there are some Ceramic Shards. Continue on down the path to find some Yashariku’s Sugar by the gate. At the bottom of the grass-filled area, you will find three wolves. Kill them before heading up the stairs. Up the stairs, there is another mini-boss: Lone Shadow Masanaga the Spear-Bearer.

Do not fight him up here; instead, bring him down to where you killed the wolves. This guy has all the same attacks as the other purple-armored enemies. The only thing is, he can occasionally do a Poison-based punching attack, which you should dodge out of the way of. Other than that, just keep defecting and getting hits in after his Perilous kick and any jumps he does.

Once he is dead, you will get a Prayer Bead and some Yellow Gunpowder. In the room where he was standing, you can find a Dragon’s Blood Droplet. Reactivate the Idol and head back to the Old Grave Idol.

From there head back up to the Upper Tower – Ashina Dojo Idol.

In this room ahead, you can find a mini-boss. However, before you go charging in. You can sneak around and kill the enemy that is hiding on the left side of this room. Lone Shadow Vilehand is an exact copy of the mini-boss you faced down at the path near the Old Grave. Therefore, use the same tactics on him. Once you defeat him, you will get a Lump of Fat Wax and a Prayer Bead. Head back outside the window to talk to the Man.

Head back up to where you fought Genichiro for a cutscene.

I will update this guide once I play through the game again and choose this option.

If you choose to stay loyal to Kuro you will fight the Great Shinobi – Owl. You can see our boss guide on how to defeat him.

Once you have taken him down, you will get the Memory: Great Shinobi and an Aromatic Branch. You can reactivate the two Sculpter’s Idol’s here.

Finally, talk with Emma and Kuro. Kuro will tell you that it is time to head to the Divine Realm, a place called the Fountainhead Palace. Head back to the palanquin at the end of the Ashina Depths area. That covers it.

We will have our guide up for the Fountainhead Palace in a few days. For now, check out all of our Sekiro coverage here.