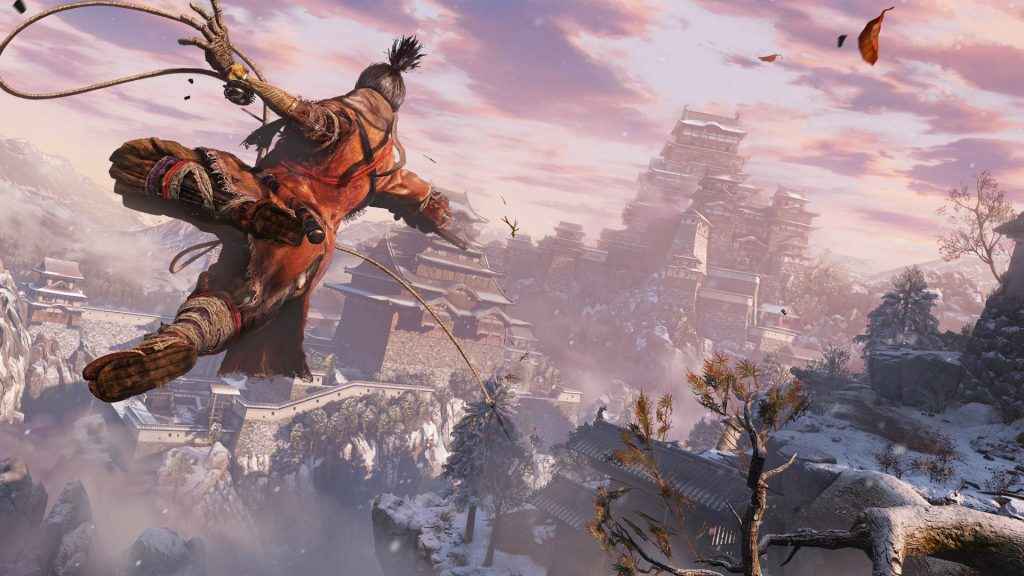 Sekiro: Shadows Die Twice is Game Informer Magazine’s cover story for the month of February. Therefore, there is a whole bunch of new information about the game being revealed. We have compiled that information into this article, written in our own style. All of this information will be coming from the Game Informer February Magazine unless explicitly stated otherwise, so all credit to them and their amazing feature which you should read after reading this.

Early concepts for Sekiro originally pitched the game as a reboot of Tenchu, the classic ninja franchise that From Software bought the rights to in 2004. However, From Software (From) quickly decided to ditch that idea and make Sekiro a brand new IP, to avoid any negative opinions around the Tenchu IP. Don’t worry too much though as according to Game Informer “You can see the Tenchu DNA in the design and flavor of many mechanics.”

Making Sekiro its own IP has allowed From Software to separate the game from their last two franchises. The game does not have a character creator; instead, casting you as Sekiro – The Wolf. On top of that, builds are gone from the formula. You are a shinobi from Senguko-era Japan, who is tasked to rescue his young lord and kill those responsible. Sekiro actually has a lot of different gameplay-wise to past From games. The game does feature a hub area that allows you to fast travel to different areas, as well as memories. Memories are separate, story-focused areas that are outside of the traditional gameplay sections. One example in the magazine is a memory set three years in the past, during the burning of an affluent samurai home. These memories can be entered through Sculptor’s Idols, Sekiro’s equivalent of bonfires.

The hub area of Sekiro is dubbed the Ashina Outskirts and is apparently similar to the Hunter’s Dream and Firelink Shrine from Bloodborne and Dark Souls respectively. Player’s can teleport to the Ashina Outskirts from any Sculptor’s Idol. There is also a variety of characters to interact with.

The Sculptor creates the idols as well as the prosthetic arm that Sekiro has. You can upgrade prosthetics and create more prosthetics at The Sculptor. Emma is a strange woman with medicinal skills. You can hand her spirit-water drops to increase the number of times you can heal. Finally, The Immortal Soldier acts as a training dummy to hone your skills. You can also master new abilities by talking with him.

Various gameplay systems are still in place from previous From games. Your prosthetic arm and its abilities are powered by consumable Spirit Emblems found in the world. A Healing Gourd allows you to, well, heal. However, the grappling hook adds a whole new dimension to From’s games.

This hook is a free attachment to your prosthetic and can be used at any time, as many times as you want. With this you can zip from Tree branch to rock face, quickly moving from flat ground to a hill up high. It can also be used to gain a height advantage and survey the area, planning your attack, all before taking on the first enemy. Stealth has also been added allowing you to hide behind corners and in the grass. In turn, enemies have detection meters that will slowly fill the longer you are out in the open.

However, Sekiro isn’t a stealth game at its core, these are just extra options. There is no stamina management in the game, with From opting to focus on the combination of various moves including, dodging, attacking, deflecting, prosthetic abilities, and combat arts. All of these moves work together to wear down an enemies posture. Upon fully draining an enemies posture, they will be left open for a finishing attack that deals a wallop of damage.

The world of Senguko-era Japan is filled with various enemies, including minibosses. These are plentiful in Sekiro, and not compulsory. However, they can drop valuable items. If you do fall to an enemy though, don’t fret. You have an additional life in Sekiro, which can actually recharge if you perform a special deathblow on an enemy. And, according to Game Informer, “From hints at the possibility of acquiring more” than two lives. The best part, you can choose when to resurrect yourself.

There will be a death penalty; however, from were not ready to share details on what that is. In fact, all resources persist through death, including coins, consumables, and experience.

Levelling up individual stats is gone in Sekiro. Instead, gain experience points that go towards skill points, which can then be invested in various skill trees. These skills grant players with new moves and abilities in combat, such as stepping on an enemy’s spear as he thrusts it and following up a shuriken toss with a slash.

There are some passive ability branches, which can enhance certain effects, or just grant straight up stat buffs. The philosophy behind this is to give players as many tools as possible and allow them to specialise where they want.

Prosthetic attachments act as large progression upgrades, as they act as additional tools to use. By finding materials in the world you can then augment these prosthetics even further. However, your armour and weapons cannot be changed. Sekiro actually allows you to listen on guards conversations, gaining intel in the process. The game also features full swimming mechanics, allowing you to explore the water. Enemies can actually be used against other enemies. An example given in the magazine is that killing Poison Lizards in a specific way will cause poisoned blood to spray around you. Hazardous areas are back along with the poison and toxic status effects. Phew, that was a lot of information. Once again all of this came from the Game Informer February Magazine and you should definitely check out their feature.