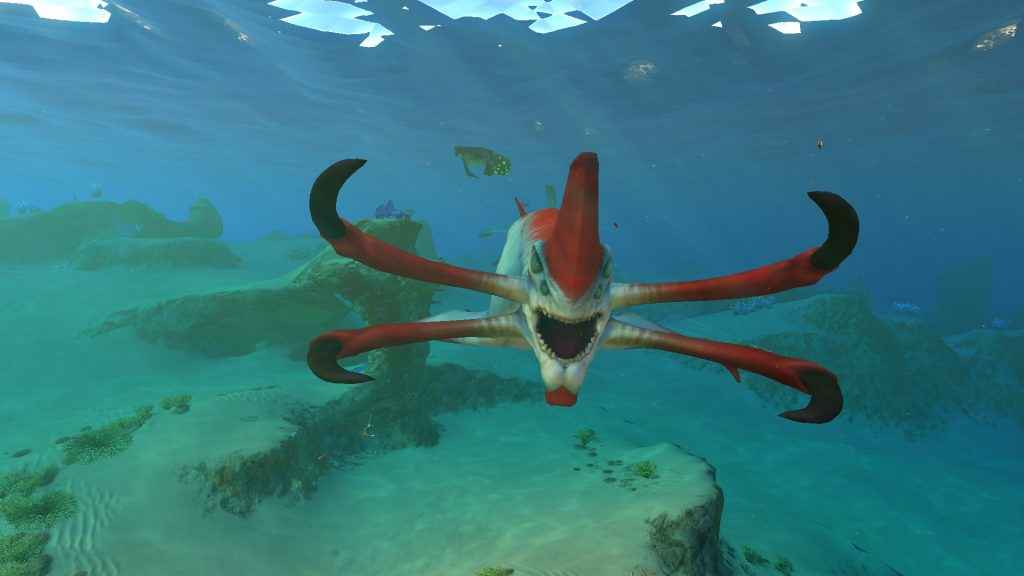 Subnautica has just launched for the PlayStation 4 and there are a ton of interesting creatures that can be found in the vast depths of Planet 4546B. The largest of these creatures are the Leviathan Class Organisms. They can be found in specific locations. Whilst they may look cool, they are not very friendly. Therefore be cautious when you get near them.

Below is a guide to each Leviathan and where they can be found.

The Sea Treader is a Herbivore Leviathan and has a defensive attitude. It can come in various sizes and you can find this monstrosity in the Grand Reef or on the Sea Treader’s Path in the south-west of the crash zone. Swimming in front of the Sea Treader is not advised as it will immediately attack you, due to its defensive nature.

The Reaper is one of the most aggressive Leviathans. This dangerous creature can be in large open areas, especially within the Mountains Crash Site and Dunes. Watch out for its big attack that deals 80% damage to you. If in a submarine this is reduced to around 50% damage.

The Reefback is one of the larger leviathans. It is also quite passive and won’t attack. The Reefback can be found in a lot of areas, including the Crag Field, Dunes, Grassy Plateaus, Mushroom Forest, Sparse Reef, and the Underwater Islands.

As the Reefback is passive you can get as close as you want to it.

The Ghost leviathan comes in both Adult and Juvenile sizes. The three Juveniles can be found in the Lost River. Two adults are located in the Grand Reef, with one another being in the Northern Blood Kelp Zone. The Ghost is highly aggressive and will deal 85% damage to the player if it can get off an attack.

The Sea Dragon is a highly aggressive and giant Leviathan. Two can be found in the Inactive Lava Zone. One more is located in the Lava Lakes. The Sea Dragon can deal massive damage so be cautious around it. The Sea Emperor is one of the more interesting Leviathans as it is related to the main narrative of the game. It doesn’t attack the player and instead speaks to the player.

The Ancient Skeleton is one of the presumably extinct Leviathans. It can be found in the Lost River Laboratory Cache. That covers all of the Leviathans in Subnautica. Will you be hunting them down?

To get around the vast ocean you may want to build the Cyclops vehicle. We have a guide on how to get it and all of the upgrades for it.