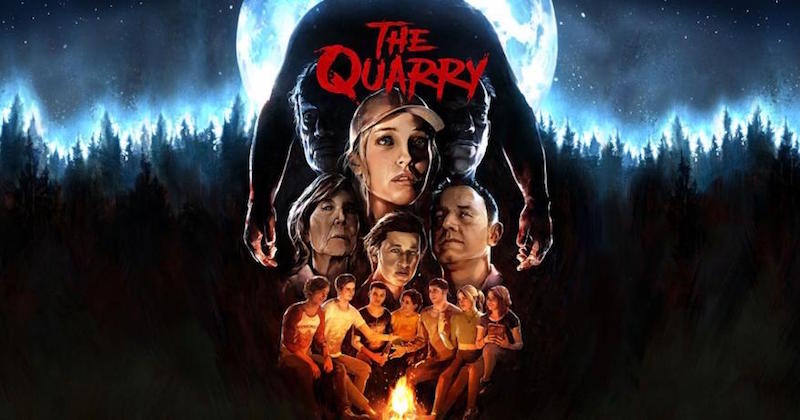 The Quarry Preview. In a year where there has been much fervor over Sam Raimi returning to his horror roots, Supermassive Games is also getting back in touch with its golden era thanks to The Quarry.

Fans of Until Dawn have long been waiting for a spiritual successor, and while that sounds strange considering Supermassive Games has made three games since then that use all the tools of that game and then some, it’s fair to say the entries we’ve had in The Dark Pictures Anthology so far haven’t captured exactly what those fans have craved.

In many ways, Man of Medan, Little Hope, and House of Ashes now feel like necessary experiments along the road to truly following up on the developer’s most enduringly popular game, albeit with some caveats. The hour-long preview I got my hands on this week certainly gives plenty of hope.

Yes, The Quarry heads back to the woods, throwing a bunch of teens and their bullshit into the wilds to face off against mysterious forces and the wicked will of the player deciding their fate. This time though, it’s not a gore-splattered Winter’s Tale we’ll be embarking upon, but a Summer of Splatter in that most familiar of horror locales; camp.

I was given a quick story setup video of the opening chapter to watch before embarking on the playable demo that consists of Chapter Two and a part of Chapter Three, which helps establish the context of what’s happening here. The setup sees lovelorn camp counselor Jacob sabotaging the car that is set to take the remaining counselors home as the camp season comes to a close, just so he can spend one more night with his Summer fling Emma and party with the rest. 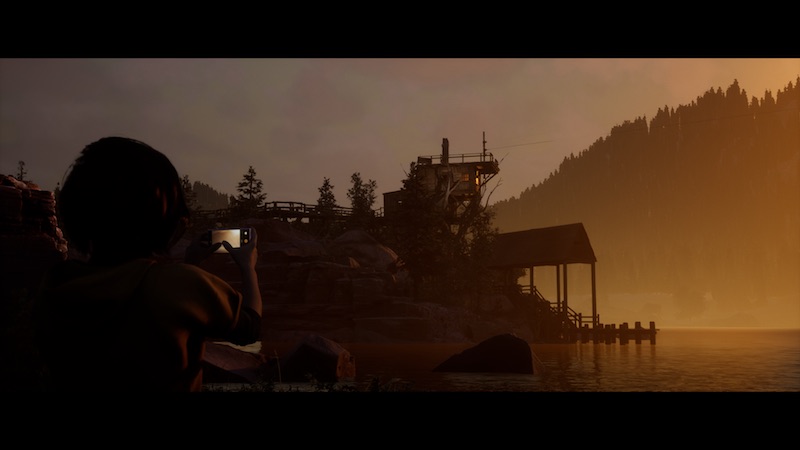 The head of the camp (played by Scream alum David Arquette) seems very put out by the counselors staying another night and sternly warns them to stay inside. Of course, they don’t.

So begins the playable portion of the preview, and it isn’t long before the blood of Until Dawn begins to seep through. There are character hopping scenes where one will be the focus for a while, but it flits between character perspectives in a fairly fluid manner, always giving you enough knowledge of whose shoes you’re slipping into next. The gang is prepping for a party time campfire booze up as the sun sets on their final day out in the wilderness.

Starting as the feisty, forceful Kaitlyn admonishing Jacob for carrying around a shotgun he found among some other supplies. Jacob challenges another counselor, Nick, to a shootout to lay claim to some Peanut Butter Butterpops he’s found. This then serves as a combat tutorial as I took control of Nick and aimed at bottles and watermelons in a bit of foreshadowing both mechanical and narratively.

The Quarry has moments like this peppered throughout the 1.5 chapters I played, but more than any Supermassive Games joint before it, they feel fleeting. The presentation (which is pretty striking to be fair) is all about capturing a slasher movie look, complete with a licensed soundtrack (I did like hearing a cover of Aimee Mann’s Wise Up crop up), a cast of veteran Hollywood faces you know, and fresh ones you may remember from something recently, but can’t quite put a name to.

This is Supermassive doing big league, blockbuster horror. If The Dark Pictures is akin to a television series, then Until Dawn and The Quarry are heavyweight horror franchise films. 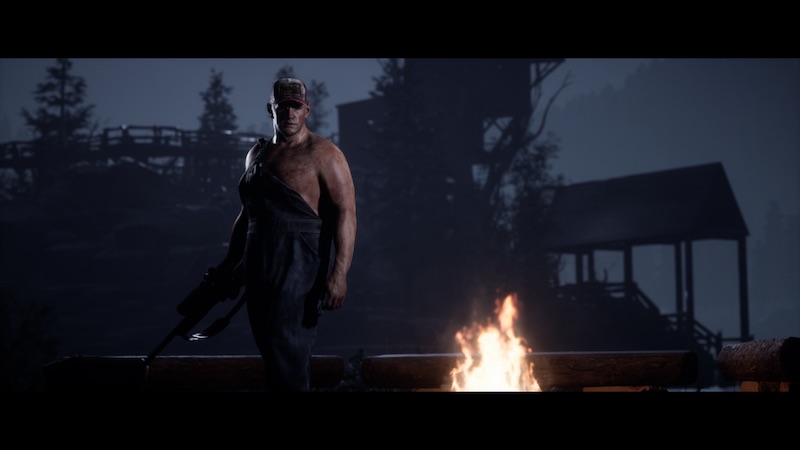 The result of driving for a more cinematic experience is less physical control over the cast than you might expect. It could of course change in later chapters, and while it may take a bit of agency away that was part of Until Dawn’s success, the streamlined approach appears to flow better as a game/experience hybrid. To be honest, it still manages to feel quite engaging. It’s just a slight concern that a big-budget Supermassive Games title might be less hands-on than its more compact anthology series entries.

Back to the game, and the chapter’s finale isn’t some grisly death-dealing, but a brutally awkward game of Truth or Dare that lights an emotional fire under two couples, and leads to the really bad times rolling.

Before that situation is resolved, however, there’s an interlude of sorts. Supermassive once more breaks out the mysterious host that talks directly to the player between chapters. This time it’s an old woman in what looks like a shack full of candles. She speaks in teasing riddles of the situation at hand, and offers a hint of what may be via a crystal ball and tarot card readings.

In all the ways that The Quarry feels connected to Until Dawn, this is something that really drives it home. It’ll be interesting to discover how this woman ties into the story being told.

The next chapter begins with Abigail, a shy, red-headed teen who stormed off in the previous chapter after her sort-of boyfriend Nick got put in an uncomfortable position by Jacob’s fling Emma after a particularly risque dare. Alone in the dark woods, Abigal hears her name whispered shortly before Nick calls out to her.

Here I was able to decide whether Abi wanted to speak with Nick or not by opting to call back. I chose to call out to Nick, and was treated to an awkward, heartfelt discussion between them as they try to sort out the mess Emma had landed them in. 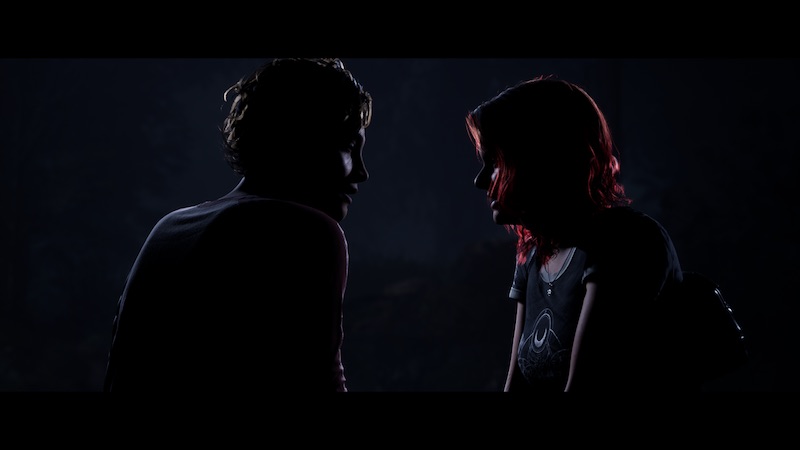 The character building I’ve seen in this hour or so of play really adds to things when terror eventually comes knocking. I feel the characters are pretty well written and performed so far, helped by generally decent mocap work that especially shines when in darker scenes, creating an almost real look to the cast. Also, because it leans so heavily into horror tradition, you just know something’s gonna spoil this tender moment, and so it does in the form of The Quarry’s monster, as it attacks poor Nick, and gives me the first ‘Key Choice’ as Abi.

Run for help or run to Nick? Key Choices are the ones that really affect where the story goes, and likely who lives to see it through. It seems there’s no ‘right answer’ to these choices, just personal preference, so it’s very much keeping in the spirit of Until Dawn there.

I chose to go to Nick, hoping the attempt to reconcile the pair wasn’t going to be brutally wiped out by the monster’s appetite for blood, even though it absolutely felt like the dumbest decision I could make for Abi mere seconds after I chose it. The monster attacks Abi next, and she only survives because an unseen presence shoots the creature, stunning it temporarily.

Now Abi has no choice but to scarper, and what follows is a pulse-pounding chase sequence, once again replete with QTE prompts and quick choices. Eventually Abi cowers, hidden from the monster’s view as it tries to seek her out. Now I have to hold my breath as Abi by holding down the action button (mercifully, there’s no holding the controller still to remain unseen nonsense here).

As a breath meter fills, and the hunting monster remains stubbornly close, real tension hits as it becomes increasingly uncertain when a ‘good time’ to exhale will be. I know I thought I’d got away with it until the snarling git pounced on Abi moments later, with the mysterious gunman or woman once again giving Abi the chance to avoid being turned into a ragged corpse.

The game then takes a rewind of sorts to present what’s going on at the same time in two other places. First to Jacob and Emma at the lake as they hash out their own personal issues, and then back to the campfire where Kaitlyn, Ryan, and Dylan are about to continue with Truth or Dare. Both sections are punctuated by Abi’s scream and the gunshots are heard. Abi arrives back at the campfire, bloodied and rightly quite agitated, explaining Nick needs help. In control of Ryan now, I make the decision to take the shotgun and head into the woods to rescue Nick.

More QTE bits follow as Ryan can choose to take shortcuts and get to Nick quicker, and eventually he discovers his fellow counselor still alive, but being dragged away by a mysterious man. A confrontation follows, and Ryan manages to dissuade the stranger from dragging Nick off with a warning shot. As the pair scramble to relative safety, the demo concludes, leaving plenty of questions needing to be answered.

Which is of course the point. The Quarry has, at this point, done its job and sold me on what it’s doing and where it’s going. I have small concerns on just how interactive the finished product will be, and there’s some technical hitches that will hopefully be smoothed out in the final build, but overall, this tantalizing slice of The Quarry definitely shows great potential. We’ll all find out soon enough, as The Quarry’s full release is a few weeks away.