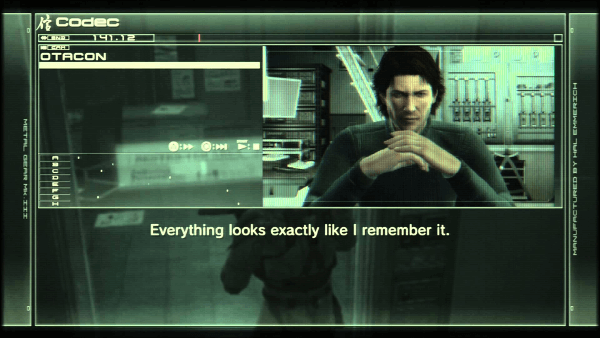 Hideo Kojima has moved onto better things. I’m more than happy for him. He has wanted to dive into something new for a long time. After seeing his work on other projects along the way, his leaving Metal Gear and the poisonous Konami infrastructure behind will make for better games. Still, I’m remorseful. Metal Gear was the first game that felt legitimate to me. Before I even knew what the game was like, I fell in love with its commentary, politics, and charm.

I found myself compelled to return to it every chance it came back into my life. I didn’t stand a chance against it. Even MGSV had me engrossed long enough for me to do everything in it, because despite its flaws, it still is a Kojima-MGS game. The longer I played, the more the truth surrounding it all came to the forefront. Shortchanged ideas and weak development came into view, nearing ever closer the longer I denied it. With the final reveal, Snake was no longer Snake anymore, and it was all I could do to muster a justification in this being the end of it all. Now the franchise is finished, and what’s worse is that The Phantom Pain is a more than perfect name for a game that isn’t really there: a false ending to something much more deserving. It wasn’t good enough for me.

“Even if a pawn becomes a queen, it is still just a playing piece.”

The last year has been one I would like to forget. Metal Gear Solid crumbling under a tyrannical corporate foot. A mortgage mishandled by two major banks. Politics turning into childish chiding and misinterpretation. Waves of crippling depression induced by a dead end job needed to support my life and writing outlets. Like most people with problems, I sought an outlet to deflect all those things that broke my humanity.

Since I was already deep in the scene, I sought Trophies, an addiction I have tried to dispel many times before. If I wasn’t popping at least a Platinum a month, I had failed myself and disappointed all the people that pay attention to my stats (nobody). After yearning for that next Platinum over and over in my growing depressive stupor, I realized after almost ten years of collecting Trophies that I had nearly reached 10,000. I wanted out. I want out.

On a wild whim, I concocted a notion to counter all of my gaming tribulations at once. I wanted the Metal Gear Solid 4 Platinum to be my 10,000th Trophy, which coincidentally would be my 130th Platinum and the final MGS-based Platinum left for me to earn. More than that, I wanted to retire Metal Gear for what it was and not what it will ultimately become in the rank cesspool that will inevitably be Konami’s Metal Gear Survive, a concept that if under any other banner wouldn’t be so deplorable.

I wanted it to be a final departure from the company that undoubtedly forced Kojima to keep creating these games despite his best interests and attempts to venture into other projects.

“You’re drowning in time. I know what it’s like, brother.”

I spent an entire week dedicated to running through MGS4 enough times to be ready for my final Trophy to pop the Platinum. In doing so I rediscovered what I loved about it—and realized the things I had not liked at the time, the telling things that in hindsight hinted that Kojima wasn’t making his best work. I played enough games and earned enough Trophies so that I could pop that final one and place MGS4 on that mountaintop I had stumbled across.

Thus, I staged the milestone.

A feeling of completion hit me like no other Platinum had before. This was what I wanted. Yet, the high dropped off fast and left me melancholic. I traveled back to the living room where my cousin first showed me MGS2 back in 2002. It was a codec call between Snake and Mr. X, or Olga Gurlukovich in disguise. I was so passionately engrossed then in something far beyond me. I played it constantly, digging into codec calls, lapping up every piece of lore I could unearth along the way. A couple summers later, my future father-in-law, despite his judgement of me, bought me an original copy of MGS1 from a pawn shop because I had forgotten my cash at home. All these memories hit at once, and it felt like I had returned to my own life’s Shadow Moses.

“You were the lightning in that rain.”

The final memory came when a colleague here at PSU mentioned that the ninth anniversary of MGS4 had happened recently. I had to check for sure, but I was almost certain that that day, when I earned the MGS4 Platinum, was nine years to the day since the game released. It was. It all hit me at once. The significance of what I had hoped to accomplish with these milestones all landed on June 12, synchronicity I could not have felt if not for circumstance.

I went back to 2008. It was nearly midnight. I stood outside with my now-spouse at the GameStop an hour away from my mom’s home. I looked forward to this game then, because, down on my luck after a failed attempt at moving out and a recent loss in the family, I needed something to keep me sane. One person in the GameStop line was dressed up in all military camo with a bandana, and another person wore a cardboard box the entire time. I felt good for the first time in a long time.

Even driving back to the reality of my life then, I had something to look forward to, instead of mindlessly stewing in my minimum wage janitorial job at the American Legion, cooking for ungrateful bingo players and cleaning their toilets while my degree collected dust on a shelf in my mom’s house. MGS4 had finally arrived, and I was more than ready for it.

I expected to be affected by the milestones I sought after, but I didn’t expect to cry. Even now, I’m in a similar hole I was in nine years ago, though under different dimensions, and here was MGS4 saving me again, giving me a chance to break away from what ails me just enough to regain a hint of perspective. I’m not sure who or what to thank specifically for all of these events lining up the way they did, history mixed with circumstance, but there is a long list of names that have contributed to it: my cousin, with whom I’ve fallen out; my spouse, for feeding my fandom; David Hayter, Christopher Randolph, Jennifer Hale, Debi Mae West, Phil LaMarr, Paul Eiding, Cam Clarke, Patric Zimmerman, et al., the voices of beacons; and Hideo Kojima, for willing Metal Gear into existence all those years ago.

Without any of you, I might not be around today. Though I might not do much with this life, which is a statistical inevitability, I want in better times to be more than a fixation on statistics.

What’s been staggering about adulthood is that it’s placed on us based on the things we have to withstand as opposed to the things we achieve. Bills, jobs, and money are society’s way of saying that you’re an adult. Really though, any animal in a cage can do all that. Through most of my adult life, I have found perspective in MGS, whether that perspective was latent or not. Whether it’s part of witnessing marvels or finding old nuances long buried, the point is that they were there and that I found them, because without them I wouldn’t be me.

For better or for worse, after fifteen years of love and admiration, I close the doors on it all, leaving residual memories to linger as long as I need them. Behind those doors are now all the lives that influenced me, stowed away for safe keeping, and the phantom pain that gave me the illusion of something that should have been there. Here they stay, forever encapsulated. I am better in moving on. I wish I could go with you, Metal Gear.

What once was special is now gone, and only in revisiting it will I find the respite I need to continue forward. Inevitably, I will return to it, but only in longing reminiscence of a time when the world fell away and I was lost in something special. After all, it is foolish to expect more when the flavor still lingers on the palate long after the tap runs dry.

“Here’s to you, Nicola and Bart
“Rest forever here in our hearts
“The last and final moment is yours
“That agony is your triumph.”